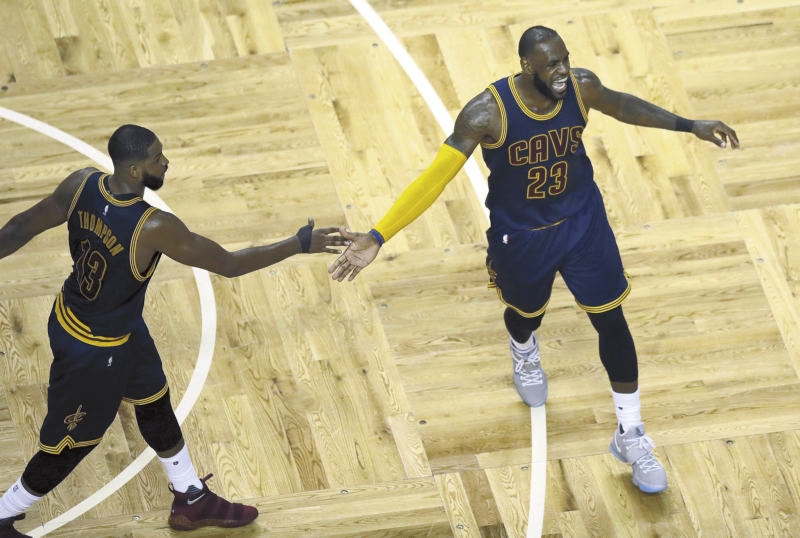 Cleveland Cavaliers center Tristan Thompson, celebrates with forward LeBron James after a basket during the second quarter of Game 1 of the NBA basketball Eastern Conference finals against the Boston Cetlics, Wednesday, May 17, 2017, in Boston. (AP Photo/Charles Krupa)

BOSTON (AP) — LeBron James embarrassed every defender Boston threw at him and the Cleveland Cavaliers picked up where they left off following a long layoff, rolling to a 117-104 victory over the Celtics on Wednesday night in Game 1 of the Eastern Conference finals.

“He’s playing at a high level. And that’s the reason why we’re riding him so much,” coach Tyronn Lue said. “When LeBron’s playing at that level other guys just have to be solid and we have a good chance to win.”

Coming off a 10-day break, James and Cavaliers raced to an early lead were never threatened.

“You can’t dig yourself in a big hole like that against them,” Boston coach Brad Stevens said.

Kevin Love added a playoff career-high 32 points and had 12 rebounds to help the Cavaliers improve to 9-0 in the first three rounds of the playoffs. They opened 10-0 last season en route to their first NBA title.

Game 2 is Friday night in Boston.

James scored at will in the first half and the Cavs built a 26-point lead. Love opened up the floor for James, burying outside jumpers and forcing Boston to leave defenders one-on-one with James.

Avery Bradley and Jae Crowder led the Celtics with 21 points each. Isaiah Thomas had 17 points. Boston missed 11 of its first 14 shots.

Love averaged a quiet 13.8 points in the first two rounds, then broke out against a Boston team that knocked him out of the 2015 playoffs when he became tangled with Kelly Olynyk and dislocated his shoulder.

The shoulder was working just fine Wednesday, and he scored in the paint and from the outside.

Things got a little testy in the third quarter when Boston’s Marcus Smart and Cleveland’s Tristan Thompson got nose-to-nose and had to be separated by referees. Some jawing continued briefly before James stepped in to pull Thompson away.

Smart and Thompson were called for double technical on the play, but got tangled again a few minutes later. This time, Smart fell to the floor during that exchange, drawing a foul on Thompson.

The Celtics found some energy after the incident, closing the third quarter on an 11-3 run to pull to 92-75.

It didn’t last long, though, as the Cavs quickly got the lead back up to 20.

James picked apart every defender that the Celtics threw at him in the first half.

He backed down defenders to set up 15-foot fade away jumpers. Other times, he simply took defenders off the dribble or sliced through double-teams on the way to layups.

Boston also seemed content to make every switch created by Cleveland screens, leading to some awkward matchups for James in the first half. In one such instance, Olynyk found himself one-on-one with James, who promptly drove past him and drew a foul at the rim.

The Celtics couldn’t get anything working when they had the ball, held to just 35 percent from the field in the first half and 2 for 16 from beyond the arc.

The Cavs also held Thomas at bay offensively. He was 3 for 11 overall and 1 for 4 from the 3-point line after 24 minutes.

Cavaliers: Since Game 5 of NBA finals, Cleveland has won a franchise-record 12 straight playoff games. … The Cavs hold a 33-4 playoff record against Eastern Conference opponents (16-3 on the road)

Celtics: Finished with 14 turnovers, and were outrebounded 32-27. … Lost at home for the first time since Game 2 of first round against Chicago.