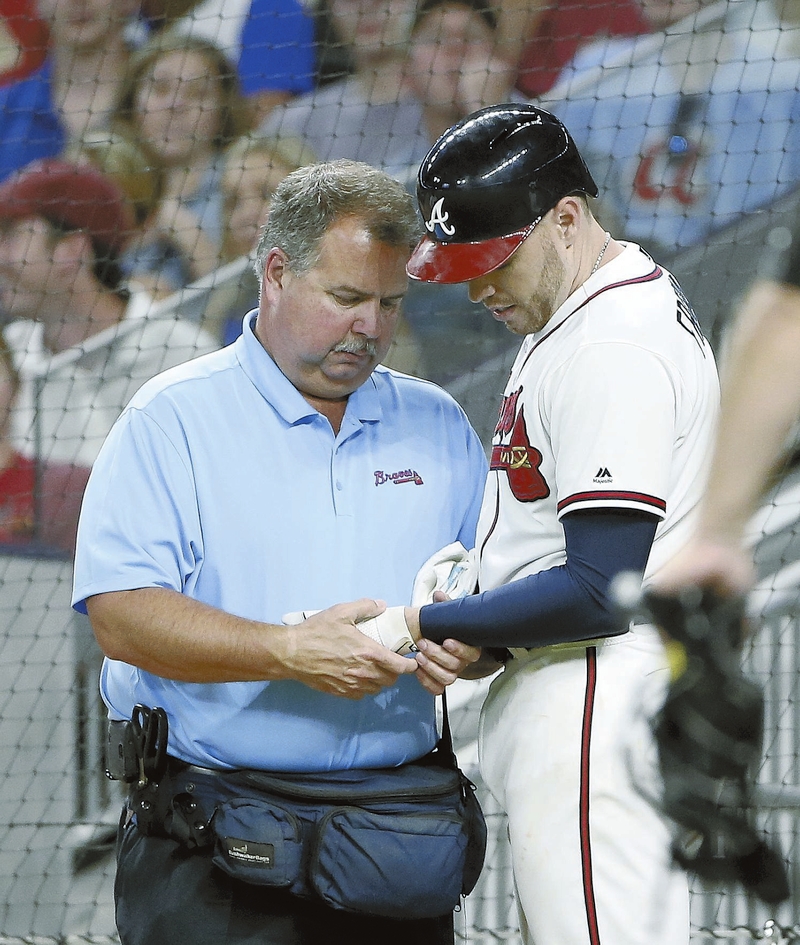 Atlanta Braves first baseman Freddie Freeman (5) has his hand examined by trainer Jim Lovell after he was hit by a pitch from Toronto Blue Jays relief pitcher Aaron Loup (62) in the fifth inning of a baseball game, Wednesday, May 17, 2017, in Atlanta. Freeman left the game. (AP Photo/John Bazemore)

ATLANTA (AP) — The Atlanta Braves scored six runs before making an out, and things turned ugly in the late innings after a bat flip by Jose Bautista.

All of it was overshadowed by an injury to Freddie Freeman.

The Braves rode a big first inning to their third straight win over the Toronto Blue Jays, holding on for an 8-4 victory Wednesday night after Freeman was struck on the left wrist by a pitch.

Coming into the night hitting .343 and tied for the major league lead with 14 homers, Freeman was X-rayed at the stadium and will undergo further tests on Thursday.

His teammates and manager Brian Snitker were clearly concerned about the potential seriousness of the injury.

“That’s the number one thing,” said Suzuki, who capped the early onslaught with a three-run homer. “A win is a win. We’ll take it. But we’re kind of looking at the big picture. When your best player goes down, and he’s hit in kind of a freak spot, you’re just hoping for the best.”

When Freeman was injured in the fifth inning, the umpires initially ruled that Aaron Loup’s pitch did not make contact. But with the Atlanta star in obvious pain, the Braves challenged and the call was reversed.

Freeman headed to the clubhouse instead of first base.

“When the best hitter in the game goes out, it really sucks,” said Braves starter Mike Foltynewicz (2-4), who allowed three runs in six innings for the win.

There were a couple of altercations in the late innings.

Kevin Pillar struck out swinging to end the seventh and claimed he was quick-pitched by Atlanta’s Jason Motte, yelling toward the mound before Suzuki stepped in to calm things.

Then, in the eighth, the benches emptied after Toronto’s Bautista homered to left, standing at home plate and staring toward pitcher Eric O’Flaherty before flipping the bat away with a towering toss. Jace Peterson said something to Bautista as he rounded first, and Suzuki was waiting for Bautista when he touched home.

No punches were thrown, but O’Flaherty didn’t mince words about Bautista’s actions.

“That’s something making the game tough to watch,” the pitcher said, referring to previous home run celebrations by the Toronto slugger. “It’s turned into look-at-me stuff. He hit a home run with (the Braves holding) a five-run lead and throws the bat around. I’m just tired of it. I’ve seen it from him enough.”

O’Flaherty then brought up a huge punch that Bautista took just over a year ago during a scuffle with Texas second baseman Rougned Odor.

“Nobody’s ever seen that before?” Gibbons said mockingly.

But he conceded that his team was frustrated.

“Those guys have taken it to us the last couple days,” Gibbons said.

After the Braves took two straight in Toronto, scoring 19 runs, the teams shifted to SunTrust Park to complete the four-game, home-and-home series.

The result was the same. Atlanta jumped all over Joe Biagini (1-2) the first time up, taking advantage of two walks and a throwing error by the Jays starter.

Nick Markakis had a two-run single and Suzuki followed with a drive into the left-field seats for his second homer of the season, putting the Braves ahead 6-0 before Biagini finally recorded an out.

Blue Jays: SS Troy Tulowitzki (right hamstring) will not come off the DL on Thursday, as Toronto had hoped.

Braves: 3B Adonis Garcia was placed on the 10-day disabled list with tendinitis in his left Achilles tendon. IF Johan Camargo was called up from Triple-A Gwinnett to take his place on the roster, while Peterson took over Garcia’s starting spot. Camargo wound up in the game, replacing the injured Freeman and remaining at third base, while Peterson shifted over to first.