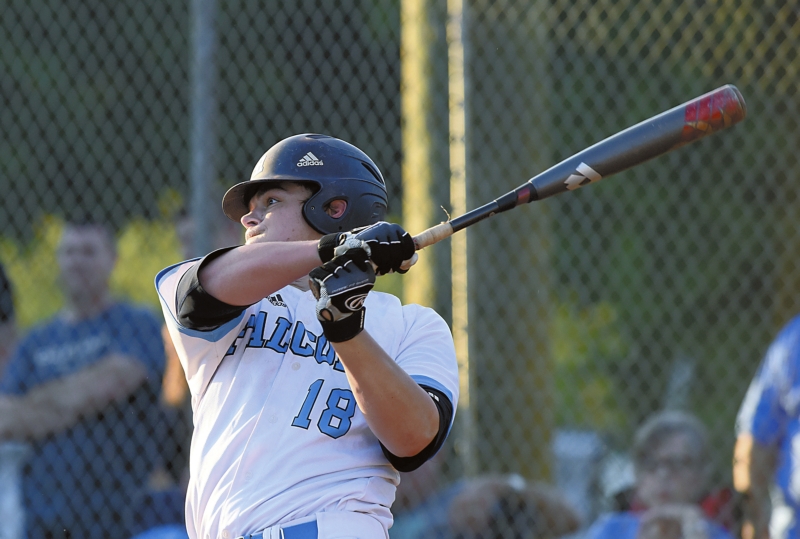 Wayne Hinshaw/for the Salisbury Post ... West Rowan’s Pearce Wilhelm (18) had the game-winning, walk-off hit in bottom of the eighth inning Tuesday night, as the Falcons rallied for an 8-7 third-round playoff victory over A.C. Reynolds.

MOUNT ULLA — It was a finish that made you want to break into song — and all West Rowan was saying Tuesday night was give Pearce a chance.

We’re talking about Pearce Wilhelm, the senior right-hander smoothed the edges with 2 1/3 innings of scoreless relief —  then delivered a dramatic, eighth-inning RBI-single to lift the Falcons past visiting A.C. Reynolds and into Round 4 of the 3A state playoffs.

“He’s made the most of his opportunity,” coach Seth Graham said after West (21-6) earned a fourth-round match with Shelby Crest at home Friday. “He was really struggling early in the season. The thing about Pearce is that he works at it. He puts in the time. He’s here on the weekends, hitting in the cage by himself. It’s eventually paid off.”

It paid off big time last night, when the Falcons rallied from a 7-0 deficit to win their third straight post-season game. Wilhelm, who started the season 2-for-25 with 18 strikeouts, blistered a ground-ball single into left field that plated teammate Austin Love with two outs in the bottom of the eighth.

“I really didn’t know what had happened until I heard the cheers,” he said after producing two doubles and reaching base five times. “I figured they either made a spectacular play or we just won the game.”

Improbable as it seemed, West prevailed on a night when starting pitcher Love wasn’t himself. The tall senior allowed five runs on five hits, walked four batters and hit another, all in a 3 2/3- inning misadventure.

“I didn’t have my best stuff,” he said. “So I tried to make them put it in play and see what happens.”

What happened wasn’t good for the home team. Reynolds (17-7) blooped a few hits, drew a few walks and launched a few missiles against Love, who displayed a post-game blister on his left hand. Halfway through the game it sat on a seven-run cushion with starting pitcher Josh Dotson in control — meshing a mid-80’s fastball with a paralyzing curve that touched every corner of the plate.

“He had great command early,” said Rockets’ coach Bryan Craig. “He was throwing two pitches for strikes, doing pretty much anything he wanted to do.”

Entering the bottom of the fourth, the Falcons had managed only one baserunner against Dotson, a six-game winner with a 1.14 ERA. They weren’t dead yet, but vultures were circling overhead.

“We needed a spark,” said infielder Brett Graham. “Whoever it came from, it didn’t matter. We were tired of not hitting the ball.”

West’s about-face began with a dropped fly ball in left field. Then with one away Olen Stamper — the team’s second-round hero — sliced a run-scoring double to right-center field. Teammate Jake Perez followed with a run-producing groundout.

“We knew we needed better two-strike approaches,” said Wilhelm, who boosted his average to .293. “The way we were losing — bloop hits, walks, misplays — we knew we were better than that.”

A four-run fifth inning pulled West within 7-6 and brought a number of spectators back from the parking lots. Key hits included Love’s soft double to right field and a two-out, run-scoring hit by Perez that trimmed the deficit to one run.

Facing flamethrower Chris Banks in the bottom of the sixth, West tied the score on Brandon Walton’s line-out/sac fly to left. Love opened the eighth with a crisp hit up the middle on an 0-2 pitch. Trevor Atwood’s sac bunt moved him to second and Walton liner to left put runners at the corners with one out. After Stamper was intentionally walked to load the bases and Perez struck out, Wilhelm stepped into the batter’s box.

“Honestly, I didn’t think he’d throw me a curveball or a change-up on the first pitch, but he did,” Wilhelm said. “I was just trying to stay through it and muscled it past the third-baseman.”

The victory went to Graham, who worked out of a seventh-inning jam before pitching a 1-2-3 eighth. He retired all six batters he faced. “It was a grind,” he said afterward.

It was especially difficult loss for Reynolds, which traveled from Asheville. “Give West Rowan the credit,” said Craig. “They didn’t quit when it was 7-0. They’re scrappy kids who battled until the end.”

NOTES: Seventh-seeded Crest (18-6) advanced with a 5-2 win against top-seeded Ledford. The Chargers have won 12 straight, including a 9-5 second-round decision over Carson on Saturday.