Leonard Pitts: How much proof do you need? 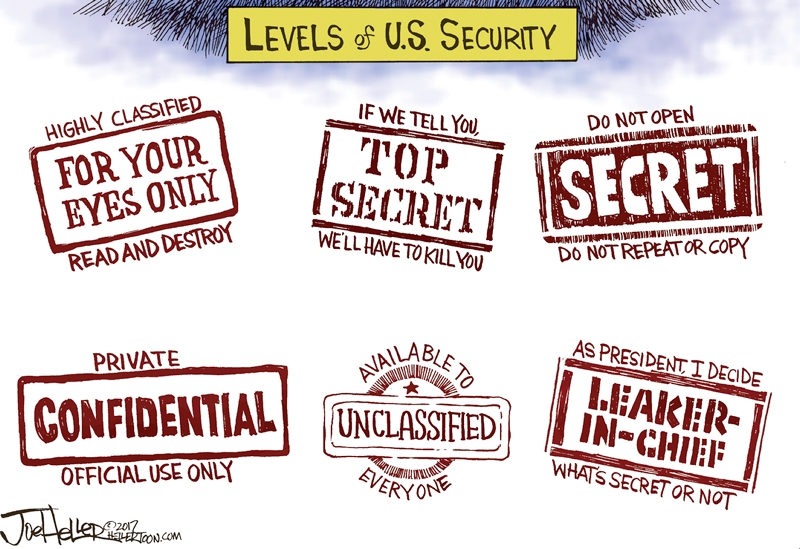 So how much more will it take? What else do you need to see?

Seriously: What Rubicon must yet be crossed, what crisis must be borne, what tragedy must befall, before you stop smiling queasy, nothing-to-see-here smiles, stand like grown-up women and men and say, finally, that enough is enough?

You are posing for history here. The portrait is not flattering.

Consider that in just the past few days, Donald Trump has fired the FBI director investigating his campaign’s possible ties to Russia and its meddling in last year’s election; provided a prima facie case for obstruction of justice in an interview with NBC News; and been accused of having once asked the director for an oath of personal loyalty just like — sorry, but it’s accurate and apropos — Hitler required of the German Army.

After all that, he went and spilled highly classified secrets to Russia’s foreign minister and ambassador.

As first reported Monday by the Washington Post, he evidently did this while boasting — big surprise. Worse, the information was from a third party — reported to be Israel — that had not authorized the United States to share it. So Trump’s blabbermouth will likely chill our relationship with that third party and shut off that and other valuable sources of information. Would you share secrets with a nation whose president leaks like an overactive bladder? Not incidentally, Trump may well have endangered that third party’s assets on the ground.

Yet, Republicans, the responses from your leadership have been largely tepid. Senate Majority Leader Mitch McConnell sniffed that he’d like to see “less drama.” And House Speaker Paul Ryan, who once opined that Hillary Clinton’s carelessness with classified materials should disqualify her from handling them seems, at this writing, to be suffering from laryngitis.

Sorry, Republicans, but that will not do. In recent years, your party has been an engine of perpetual outrage and permanent investigation on matters great and small that embarrassed Democrats. From Bill Clinton’s sex life, to Hillary Clinton’s emails, to Barack Obama’s birth certificate, to the tragedy at Benghazi, you have seldom missed a chance to appear before the people in moist concern and righteous indignation.

Which makes your leaders’ moral flaccidity in the face of this outrage all the more untenable. What Trump has done in just the last week — forget the daily transgressions of the last four months — would’ve had you howling for Obama’s blood and building a scaffold for Clinton.

How much longer will you stand in partisan solidarity to protect a guy who would not walk across the street to protect you? Have you no loyalties deeper than party? To what, exactly, do you pledge allegiance? You need to decide soon because, contrary to McConnell’s pious wish for less “drama,” this will not get better.

People often ask if Trump is “crazy” or engaged in some deep strategy invisible to mere mortals. But they are overthinking him. All evidence suggests the answer is actually simple: Donald Trump is stupid.

No, not “ignorant.” Ignorance can be fixed. Trump is profoundly stupid. Yes, he has a certain native cunning. But he is simply not smart.

Compounding the problem, he is incredibly arrogant. Given the power of the presidency, that’s a supremely dangerous combination. As proof, consider the damage he has done in just four months. Then consider that at least 44 more lie ahead. Your course of action, if you have even a molecule of courage, integrity, or country love, should be obvious.

Letter: There it is