Byron York: It’s time for the FBI to tell what it knows 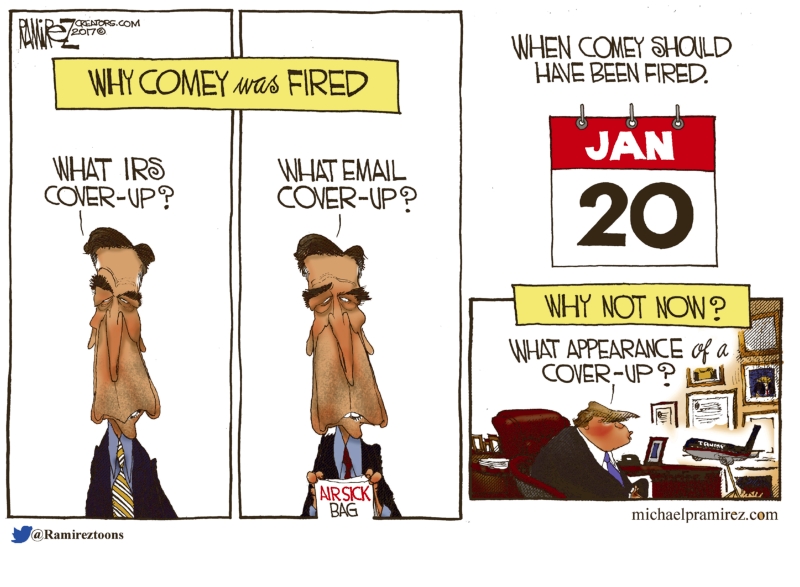 Calls for a special prosecutor to investigate the Russia-Trump affair have multiplied in the days since President Trump fired FBI director James Comey. Almost invariably, Democrats and others calling for a prosecutor say such a step is needed to “get to the bottom” of the matter.

Yet there is still uncertainty among the public about whether anything lies at the bottom of the Russia-Trump controversy. Is there a crime down there? No one seems to know. The reason is simple: The FBI, which has been investigating alleged ties between Trump campaign figures and Russia for ten months, won’t say.

To question after question; not just from the press, but from lawmakers with a constitutional responsibility to oversee the FBI, the Justice Department, and the intelligence agencies — answers have been withheld on the grounds that they are classified, or the subject of an ongoing investigation, or both.

“I can’t answer that,” said Comey on many, many occasions during oversight hearings on the Russia affair.

“My answer would require me to reveal classified information, and so I can’t answer that,” said former acting attorney general Sally Yates in the same setting.

Now, as the Russia-Trump controversy festers, there are signs of growing impatience with the secrecy. Some lawmakers — among them the Republican chairman and the Democratic ranking member of the Senate Judiciary Committee — are pushing the FBI and other agencies involved to let Congress know what they are doing. In particular, lawmakers want to see evidence — if there is any — to show why the investigation is focusing not just on Russian misdeeds — there’s no doubt there are plenty of those to investigate — but on Trump campaign figures, and possibly on the president himself.

On Friday, Judiciary Committee chairman Charles Grassley and ranking Democrat Dianne Feinstein sent a letter to FBI acting director Andrew McCabe and Deputy Attorney General Rod Rosenstein demanding briefings on the latest in the Russia investigation. The last paragraph of the letter indicated that the senators’ patience is running thin. “Please contact (staff) by 5:00 p.m. today to schedule the briefings,” Grassley and Feinstein wrote. “Thank you for your immediate attention to these important matters.”

Not by tomorrow, not by Monday, not by the end of the week. Grassley and Feinstein wanted a response by 5:00 p.m. on the day of the letter. Given that the power of both parties is behind the request, they will most likely get what they want.

The day before, on Thursday, Grassley and Feinstein made news when they strongly suggested that Comey told them President Trump is not under investigation in the Russia matter. In a public committee meeting, Grassley said that when Trump said recently he had been informed he is not under investigation, “Sen. Feinstein and I heard nothing that contradicted the president’s statement.”

“I very much appreciate what you’ve said,” Feinstein said to Grassley. “And it’s very accurate …”

A short time later, a Republican aide explained that Grassley was deeply concerned by last week’s events. “We’ve seen an uptick in speculation about what has or hasn’t happened,” the aide said, “and what has or has not been found — and that’s not helpful if it is speculation not based on anything other than rumor or anything factual.”

Now, others on Capitol Hill are expressing similar concerns. “It’s hard to do oversight, especially on counter-intelligence matters, with so little information,” said a Senate Republican Sunday. “That’s been true for months.”

“Coy” is an understatement. The result of the dozens of questions left unanswered by Comey, Yates, Clapper, and others is that the public — and, to a lesser extent, lawmakers themselves — don’t know the basics of the Russia-Trump matter.

“Senators can make it an issue in the confirmation process for a new FBI director,” the House Republican quoted earlier said.

Maybe so. Right now, though, it appears that bipartisan pressure, like that coming from Grassley and Feinstein, might help get information out. Does all of the information the FBI and other agencies have classified actually need to be classified? Can nothing more be made public? Republicans and Democrats in the House and Senate could push hard on those questions.

In addition, Grassley and Feinstein want the FBI to brief every member of the Judiciary Committee, not just the chairman and ranking member. Just as a practical matter — multiplying the number of people on the committee who know the facts by 10 — that will certainly make it more likely that information will get out.

If nothing changes, the country could be facing months and months of accusations without voters knowing their basis in fact — or lack of basis in fact. Meanwhile, the FBI and other agencies could remain “coy” while Democrats seek to create the impression in the public’s mind that Trump and his aides colluded with Russia to throw the 2016 election. If the Trump team did that, the public needs to know. If they didn’t, the public needs to know that, too. Soon.