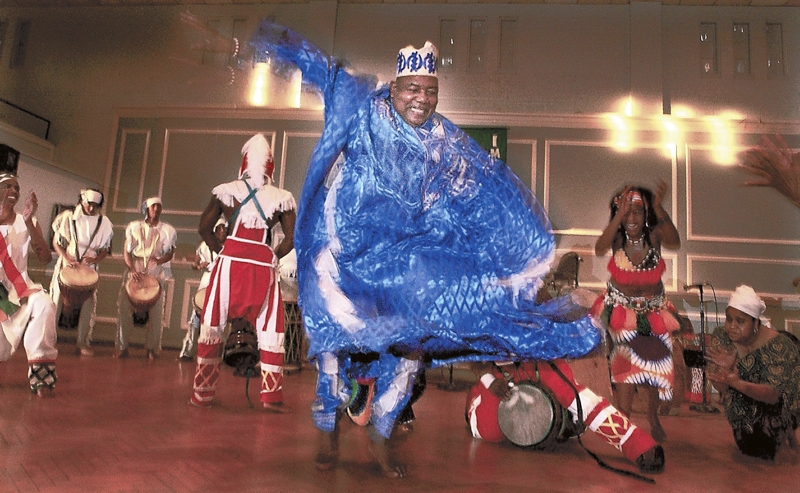 In this Jan 1, 2004, photo, Chuck Davis dances with members of the African-American Dance Ensemble during the 18th Annual KwanzaaFest in Durham. Davis, a master choreographer and teacher of traditional African dance styles who founded dance companies in North Carolina and New York, died Sunday, May 14, 2017, at his Durham home. He was 80. Corey Lowenstein/The News & Observer via AP

Associated Press
DURHAM — Chuck Davis, a master choreographer and teacher of traditional African dance styles who founded dance companies in North Carolina and New York, has died. He was 80.
Davis died Sunday at his home in Durham, said B. Angeloe Burch Sr., executive director of the African-American Dance Ensemble, which Davis founded. Davis had been diagnosed with cancer about two years ago and had been treated, Burch said. He said the cause of death wasn’t known.
Davis founded the African-American Dance Ensemble in 1983 and was founder and director of Dance Africa, which is celebrating its 40th anniversary this month at the Brooklyn Academy of Music. He also founded the Chuck Davis Dance Company in New York in 1968.
Burch and Davis had planned to attend Dance Africa, called BAM, later this month, Burch said, adding that his death, in that sense, was sudden. “He was still choreographing … and he was looking forward to going to BAM,” Burch said.
Burch said he was still a boy when he met Davis, who was known as “Baba Chuck.”
“He was larger than life in everything he did, in the love he gave us,” Burch said. “So many of us, I don’t know what direction our lives would have taken had it not been for Chuck Davis.”
Performing and bringing joy to people were more important to him than his health, Burch said. “I have seen this man perform in excruciating pain, then get to his dressing room, and he would just sit there,” Burch said. “He just wanted to make sure everybody felt that joy and that energy and that love.”
A wake is scheduled for June 2 at Fisher Memorial United Holy Church of America in Durham, Burch said. A funeral is planned for June 3, although the location hasn’t been set, he said.