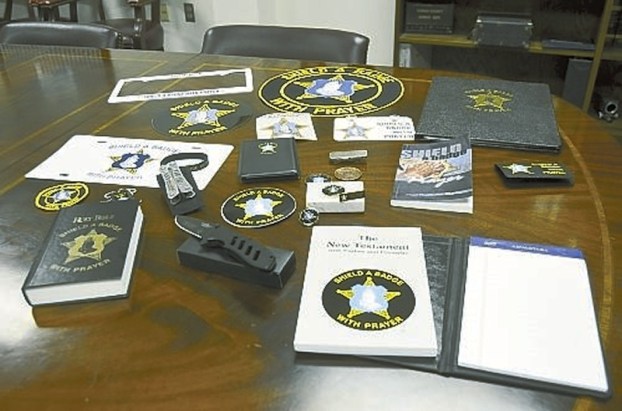 Churches and individuals can sign up for the Shield-a-Badge With Prayer program. They receive the name of an officer — be it a sheriff’s deputy, police officer or Highway Patrol— and pray for him or her for a year. Salisbury Post file photo

This year marks 22 years since the Shield-a-Badge with Prayer program began in Rowan County and law enforcement officers need prayers now more than ever, said the Rev. Michael Taylor, chaplain with the Rowan County Sheriff’s Office.

Taylor is head of the program and is always actively searching for more people to commit to praying for an officer for at least a year. Taylor, who is pastor at Phaniels Baptist Church in Rockwell, doesn’t hesitate to explain how the program works and has even launched the program outside of North Carolina.

Essentially, churches and individuals can sign up for the program through Taylor. They receive the name of an officer — be it sheriff’s deputy, police or highway patrol and pray for him or her for a year. Some participants send officers thank you notes, birthday or Christmas cards and others gift baskets. Some people even adopt an officer for a week.

Taylor said crimes against law enforcement has gotten worse and there are more dangers than they’ve faced in the past.

“It’s a simple thing, prayer. We don’t realize the power of prayer,” he said.

Most of the people who participate in the program keep the same officer while others change each year.

The program has picked up each year and especially within the last couple of months, Taylor said.

He’s expanded the program recently into Maryland after a woman contacted him who’d lived in North Carolina years ago, but heard about Shield-a-Badge with Prayer program and wanted to establish it in Maryland. The program is also in Raleigh and in Ohio.

Every year Taylor collects funds for the ministry that he uses to buy small gifts for the officers. In the past he’s given bibles, pens, utility knives and other memorabilia. Taylor is still accepting prints from a portrait that was created a year ago depicting four law enforcement officers — a trooper, deputy, city police officer and a retired officer. The officers are shown approaching a vehicle with guns drawn. The top of the portrait shows a mother with her children praying as the Lord’s hands are stretched out toward the officers.

A visit to historic Gold Hill is like stepping back in time but a visit offers much more than that.... read more