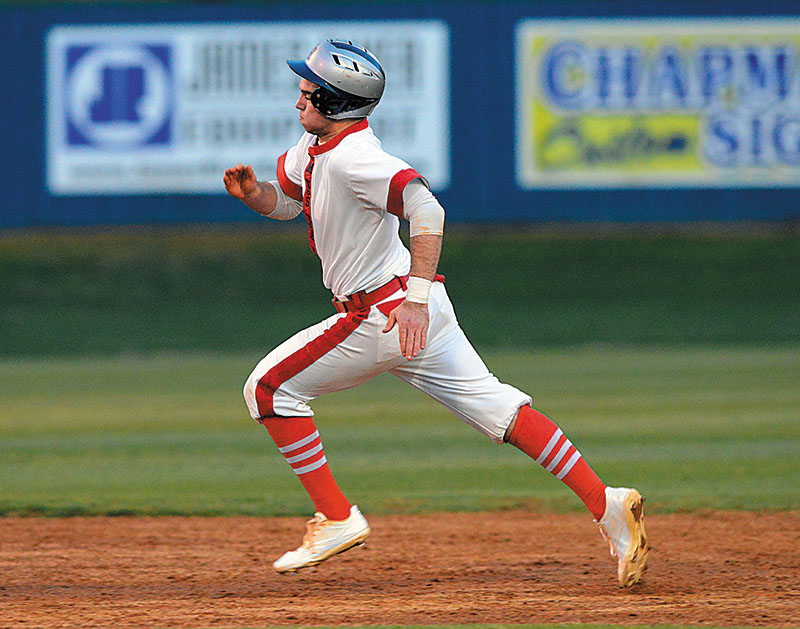 Wayne Hinshaw / for the Salisbury Post East Rowan’s Chandler Blackwelder rounds second base after hitting a triple in a game against West Rowan on March 20. Blackwelder has signed to play for UNC Pembroke.

Seriously — twice. In other words, Blackwelder, who was unbelievable for the national runner-up Rowan County American Legion team last summer, is still getting better. He should be quite a player at Division II UNC Pembroke. He recently made things official with the Braves.

Blackwelder, who didn’t even play high school baseball as a sophomore,  just turned in a senior season for the Mustangs in which he was virtually unstoppable. He batted .432 in the South Piedmont Conference, a league dominated by pitchers. He had 41 hits in 27 games with 12 doubles, three triples and two homers. His on-base percentage was .491. Blackwelder and John Owen tied for the team lead in runs (24) and RBIs (19).

“There was a two-game stretch early in the season (against Cox Mill and Carson) where I went 0-for-6,” Blackwelder said. “I don’t like to walk, but I just needed to be a little more patient and see a few more pitches. Then the hits started falling again.”

He finished the 2017 season on an 11-game hitting streak.

And then there’s Blackwelder’s baserunning ability. He was 33-for-35 on steal attempts the last two seasons and 20-for-21 as a senior. The only official caught stealing Blackwelder had this season came against Central Cabarrus after he was picked off.

“He’s just an offensive force because he can put himself in scoring position by himself,” East coach Brian Hightower said. “He hits a lot of doubles and if he gets a single or walk, he steals second. He had an unbelievably great season for us.”

Blackwelder is almost certain to be an outfielder in college and played center field for Rowan Legion and for East his junior year. But the graduation of shortstop Ike Freeman, the 2016 Rowan County Player of the Year, left a gaping void in East’s defense. Hightower decided that his best option at shortstop was Blackwelder. So that’s where he played as a senior.

“He’s our most athletic guy, so he made the sacrifice for the team and moved to shortstop,” Hightower said. “He worked hard at it, and he did a heck of a job. He was better than we hoped  he could be and he played the position with enthusiasm. His defense was a key to us having a pretty good season (16-11).”

Blackwelder, who runs a solid 6.8 60-yard dash, obviously prefers the freedom that comes with roaming the outfield, but he did his best at a challenging, new position. His athleticism  compensated for his lack of experience. There was a stretch in April where he went 10 straight games without a miscue.

“I started off kind of rough, but after a while, I got confident at shortstop,” Blackwelder said. “It’s really not that hard. You just have to be an athlete.”

While he took his sophomore year off from baseball, Blackwelder returned to the diamond with renewed passion as a junior and was a pleasant surprise for the Mustangs with a .290 batting average and 10 RBIs.

The breakthrough came for him last summer when he took over at times at Newman Park. He had 90 hits in the American Legion season as Rowan County’s leadoff man. He batted .369, scored 64 runs, whacked 24 doubles and stole 24 bases. Only one player in Rowan County’s storied history has produced more than 90 hits in a season. East Rowan grad Trey Holmes had 96 for the 2009 World Series team after playing a year of college ball. Blackwelder’s 24 doubles ranked fourth for a single season in program history.

Blackwelder’s success continued in fall showcase baseball where he competed for the South Charlotte Panthers.

UNC Pembroke had discovered Blackwelder during the Legion season and then watched him play in several showcase events.

That led to Blackwelder (5-foot-11, 175 pounds) making a visit to UNC Pembroke, and he liked everything about it. He verbally committed in February to the Peach Belt Conference’s only North Carolina school. UNCP travels south to South Carolina, Georgia, Florida and Alabama for all its league games.

“It’s a really strong baseball program (40 wins this season) with a nice campus and nice facilities,” Blackwelder said. “They play a schedule that should be a lot of fun.”

Legion stardom, showcase success and the confidence of having a college commitment in his pocket were factors that contributed to Blackwelder’s overwhelming senior year for the Mustangs.

“You could see a difference in him as a senior,” Hightower said. “Legion ball was just immense for his confidence. Every time he went to the plate,  he believed he was going to get a hit.”

Almost half the time Blackwelder did get a hit. And now he’s ready for another exciting Legion summer.