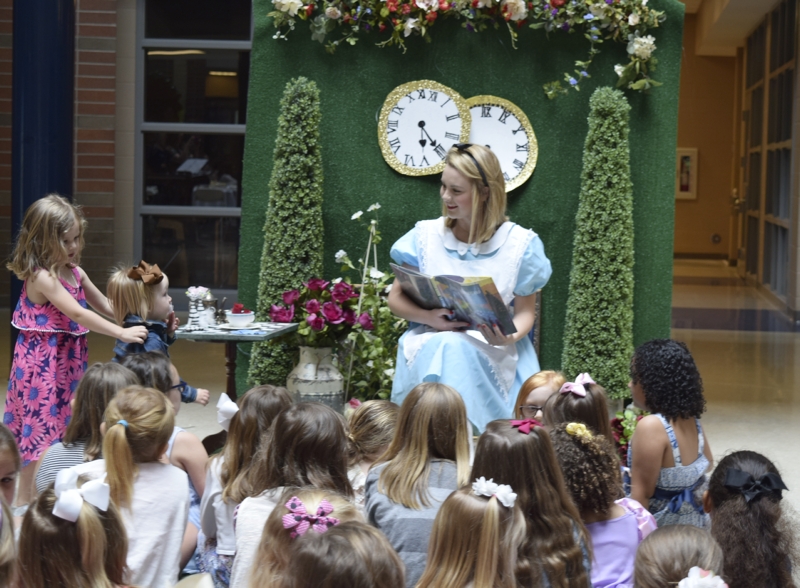 Chloe Jacobs, dressed as Alice, reads "Alice in Wonderland" to young girls attending the Tea in Wonderland event. Organizers said the tea which helped raise money for Rowan Partners for Education, was also to celebrate women of all ages. Rebecca Rider/Salisbury Post

CHINA GROVE — Card soldiers guarded the path into Wonderland Saturday — beyond their crossed spears there was a tea party underway.

Roughly 125 mothers and daughters — or mentors and mentees — sat around tables covered in white cloths, sipping tea from floral china cups and nibbling on cucumber sandwiches and madeleines. Colorful, cut paper flowers and the bright light filtering in from the skylight helped complete the transformation from high school atrium to garden tea party.

While the event — dubbed “A Tea in Wonderland” — helped raise money for Rowan Partners for Education, it also served another purpose: a time to celebrate womanhood.

Christine Gould, event organizer, said while there are community events for parents and children, such as the father-daughter and mother-son dances, there’s something missing.

“There’s no events really geared towards mothers and daughters. …Just being able to celebrate women and little girls there isn’t anything,” she said.

It was why she, and co-chair of Rowan Partners for Education, Susan Steele, decided on a mother-daughter tea, just in time for Mother’s Day. Steele laughed and said they couldn’t have planned the timing of the event better if they’d tried.

“A Tea in Wonderland” was held Saturday in the atrium of Jesse C. Carson High School.

While the tea was geared towards mother-daughter pairs, some women brought the children of friends, young girls they were mentoring or school-aged girls as a reward for good academics. Gould estimated that approximately 51 of the girls in attendance were elementary school-aged.

For many mothers, the tea offered a chance to get away from every day life and feel pampered.

“It’s special since we have boys at home,” Blaire Goodale said.

Goodale came with daughter, Audrey, and friends Leigh Miller and her daughter Madeline Miller. Miller said the event offered a good chance to spend quality time with her daughter — and the kids were excited about visiting Wonderland.

“It’s been awesome for the kids to dress up and play,” she said.

Young girls around the atrium danced and twirled in their Sunday best, or brushed off the skirts and straightened the tiaras of glittering princess costumes.

But Miller and Goodale are both teachers, and said they were happy for an opportunity to “give back” to local schools. Proceeds from the Tea in Wonderland go to support Rowan Partners for Education’s mini-grant program. Steele said the non-profit is getting ready to kick off its second round of grant awards, used to fund smaller-scale, innovative classroom projects across the district.

Steele said she was thrilled to see ladies from the community come out and celebrate being a woman.

Girls attending the tea also got a copy of Lewis Carroll’s “Alice in Wonderland” and listened to “Alice” read from a picture book version of the book.

Gould said she was thankful to Carson Principal Angelo DelliSanti for use of the school’s atrium, and to all those who helped make the event a success.

“I’m more than happy with how this turned out,” she said.

Baucom has a heart for the guests at The…