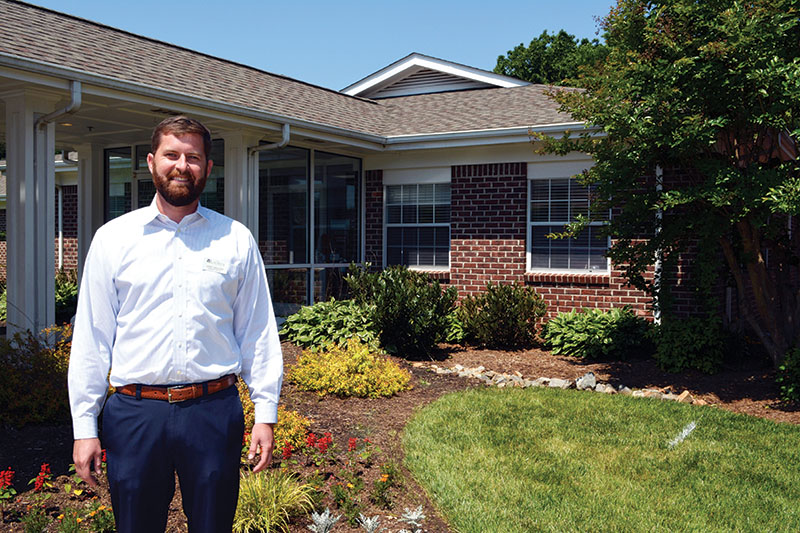 Casey Baucom has been administrator at The Laurels of Salisbury for the past 10 years. Photo by Susan Shinn Turner, for the Salisbury Post.

Casey Baucom has a busy week this week — even more so than usual. It’s National Nursing Home Week, and The Laurels of Salisbury, Baucom’s skilled nursing care facility, features special events with its regular schedule.

It’s likely Baucom will be right in the middle of everything. At 39, Baucom has worked in this role for the past 10 years, and practices what he calls MBWA — management by walking around.

A lifetime Carolina fan, Baucom graduated from the University of North Carolina at Chapel Hill in 2000 with a bachelor’s degree in management and society — a major that used to be called industrial relations. He didn’t know what he wanted to do with his degree, but an aunt to whom he’s especially close was a regional manager for a nursing company.

Baucom started in the therapy department. One thing led to another, he says, and he received an administrator’s license from the state. The Union County native worked in Albemarle for three years before coming to Salisbury.

“It’s kind of come full circle,” Baucom notes. “Six years ago, I convinced my aunt to come to work with this company.”

So she gets credit for his professional career, he says.

Although some residents may be two generations older than he, Baucom says that’s not always the case.

“Our work is not limited to the older population,” he says, as folks of all ages come to The Laurels for rehab. “I enjoy being able to help people. I never had any desire to be a doctor. If you had told me in high school I’d be working as a nursing home administrator, I’d say you were absolutely crazy.”

But here he is.

He most enjoys the interaction with residents, or “guests,” as his company calls them. “I think that’s a nice touch.”

He does have lots of meetings each day, with staff — including a “stand-up meeting” first thing each morning — and with families of guests. And the nursing home industry is second only to the nuclear power industry in regulations, so he strives to keep current with constant changes. Casey Baucom visits with Patricia Cooper and Mae Lipscombe. He always sticks his head in the door to say hello when making rounds. Photo by Susan Shinn Turner, for the Salisbury Post.

The Laurels is an 80-bed facility, giving Baucom the opportunity to get to know guests, he says. “With every new rehabilitation admission, our goal is to get them back home safely. It works more often than it doesn’t. We have great providers across all levels. There’s increased communications across all levels. We have great relationships with Novant and home health agencies.”

He often meets guests, he says, “who have been strong their entire lives, and now they’re at their weakest point. That’s hard to watch.”

Still, he says, he’s learned never to count anyone out.

One of those folks is Samuel Owen, who was kicked in the neck and jaw by a horse in 2012. He had a traumatic brain injury and multiple fractures, and came to the Laurels for rehabilitation. His daughter told doctors, “You don’t know how stubborn my daddy is.”

It worked in his favor.

When he heard Owen tell an off-color joke, Baucom knew he was making progress. Owen went on to make a full recovery, and often sends Baucom texts during deer hunting season to show him pictures of his trophies.

Another former guest who came in after a massive stroke now sends him a bracket every March to bet on the NCAA basketball games. The winner gets a Diet Pepsi.

Of course, Baucom must cope with the death of guests.

“It’s tough,” he says. “We get to know them. It’s a difficult thing to get through.”

Especially for the nursing staff, he says.

But Baucom doesn’t try to distance himself, or not get involved.

“These employees and staff members are my second family,” he says. “This community is awesome.”

Baucom and his wife, Brooke, an occupational therapist who works PRN, live in Salisbury with their two daughters, Brenna, 3½, and Camden, 10½ months. They are members of LifeChurch, and Baucom enjoys spending time with his family and outdoor activities. He loves nothing more than mowing and riding his tractor.

Each day, Baucom tries to be as accessible as possible to guests and families.

He always sticks his head in and says hello to Mae Lipscombe and Patricia Cooper when he’s on their hall. They like the fact that he’s so accessible.

“We holler and he comes running,” Lipscombe says, laughing.

“Casey is very compassionate and dedicated to the guests,” says Dolly Goff-Piersol, who is director of the dietary department. “He knows all the guests. He just jumps right in.”

That includes cleaning gutters in the rain, she says.

“We have a great team,” says staff member Suzanna Miller.

For Baucom, the job is a good fit.

“I do enjoy what I do,” he says. “It’s not something I dread doing every day. I have a lot of good days, which make up for the bad days.”