Yankees to honor Jeter between games of doubleheader Sunday 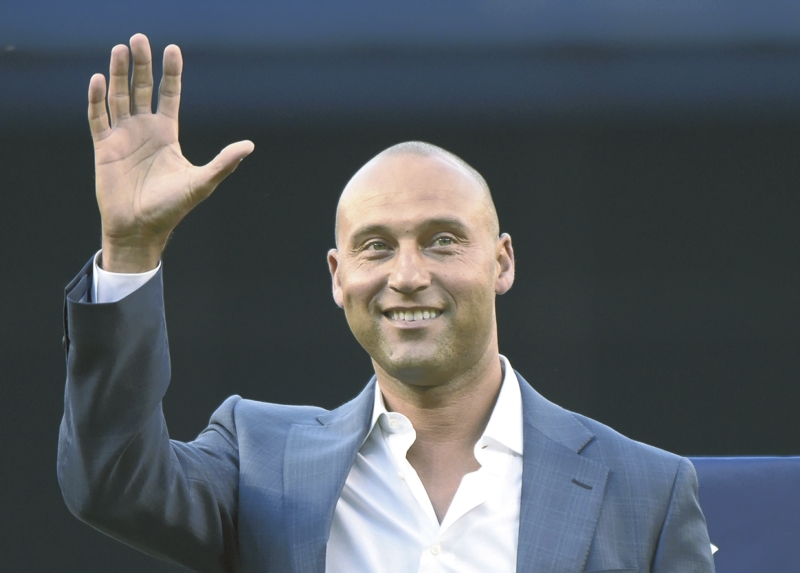 FILE- In this May 24, 2015, file photo, Derek Jeter waves to fans as he is introduced, at the dedication of a plaque for Bernie Williams in Monument Park, before the New York Yankees' baseball game against the Texas Rangers at Yankee Stadium in New York. (AP Photo/Bill Kostroun, File)

In a tribute that’s been building since he stepped away from the dirt he roamed at shortstop, Derek Jeter was set to have his No. 2 jersey retired at packed Yankee Stadium on Sunday night.

Only one wrinkle — the celebration now will take place in between games of a doubleheader against Houston, a twinbill caused by a washout Saturday.

The raindrops should be all gone by the time the half-hour ceremony starts at 6:40 p.m. But any teardrops from the man himself?

“I have no clue,” Jeter said in an appearance this week on “The Tonight Show Starring Jimmy Fallon.”

The Yankees will also unveil a plaque of Jeter in Monument Park. He’ll then throw out the ceremonial first pitch before the second game.

For once, Jeter plans to soak in the emotion.

“I’ve never sort of enjoyed the moment ‘cause I’m always looking to what’s next,” Jeter told Fallon, a longtime friend and fan.

This time, the 42-year-old Jeter said, he wanted to “just experience it.”

Only tickets for Sunday will be valid for the doubleheader.

A 14-time All-Star, Jeter played his entire 20-year career with the Yankees and was a key contributor to five World Series championships.

Jeter ranks at the top of the Yankees’ all-time list in hits, singles, doubles, stolen bases, hit-by-pitches, at-bats and games played. His 3,465 career hits rank sixth in major league history, including eight seasons with at least 200.

“I have a lot of admiration and respect for how he went about his business,” Astros manager A.J. Hinch said. “He might have been the most consistent presence in our game.”

Jeter will be the first Yankees’ player to have his number retired since teammates Andy Pettitte, Jorge Posada and Bernie Williams were honored in 2015.

“I will have our guys out here, to clap for him and be a part of it,” Hinch said. “We’ve got a couple guys that played with him.”

“Those of us that have been in the game a long time will want to, and the young guys will be wowed by the show that comes with retiring a number, especially here.”

The Yankees have lost three straight, but remain a half game behind first-place Baltimore in the AL East.