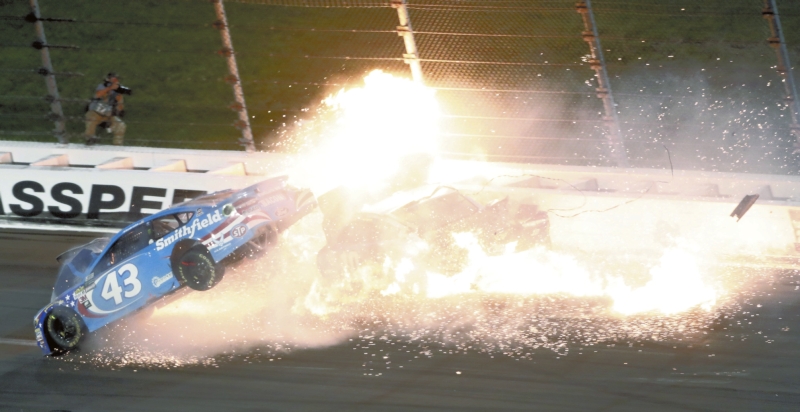 Truex dominated the same event a year ago before a fluke problem during a tire change forced him to make an unscheduled pit stop and cost him the race. He’s had plenty of other close calls at Kansas, always leading laps but never finding his way to victory lane.

Brad Keselowski made a pass on the final lap to take second, followed by Harvick and Blaney. Kyle Busch finished fifth after winning the Truck Series race Friday night.

The race was halted with 67 laps to go when a broken brake rotor turned Joey Logano’s car into Danica Patrick, sending her hard into the fence in the first corner. Aric Almirola had nowhere to go and slammed into Logano, the force of the impact lifting his car into the air.

Logano and Patrick were treated and released from the infield care center, while Almirola was airlifted to the University of Kansas Medical Center. He was conscious and alert.

The race tied a track record with 15 cautions, and the last of them for a spin involving Jimmie Johnson bunched up the field for a restart with two laps to go. Truex dove to the bottom and roared away from the rest from the rest of the field, ensuring there would be no more misfortune.

It was Truex’s ninth career win and second this season. He also won at Las Vegas.

The only race at the end was for second place. Keselowski, Harvick and Blaney went three-wide with Keselowski on the high side, and he made the move stick to finish second.

It was the first stage win for the Joe Gibbs Racing driver since the Daytona 500.

Johnson, Dale Earnhardt Jr. and Kasey Kahne were forced to start near the back because of their qualifying debacle. But all of them quickly sliced through the field, despite an intense glare in the third and fourth corners caused by the setting sun.

The biggest drama came when Chase Elliott hit Michael McDowell trying to exit his pit, causing damage to the right from of the No. 24 car. Elliott quickly fell off the lead lap.

BLANEY BACK ON TOP

Pole-sitter laney won his third stage of the year, leading the field across the line in his No. 21 Ford moments after Ryan Newman had an oil pump problem that forced him out.

Newman was running in the top 10 before his engine quit.

Johnson had all kinds of trouble during the stage. He was penalized for driving through too many pit boxes entering his own, then made contact with Kurt Busch that caused his tire to go down.

Almirola plowed into Logano’s car as it skidded along the wall, the force of the impact sent the rear of the No. 43 into the air. Almirola’s car came to rest near the outside fence, and he appeared to tell safety crews he was OK as they cut the roof off to safely get him out.

Almirola was placed on a backboard and taken to the infield care center, then was airlifted to the University of Kansas Medical Center for observation. He was conscious and alert throughout.

Logano and Patrick were checked and released from the care center.

“I’m just saying prayers for Aric,” Logano said. “Something broke in our car. I don’t know what it was. I noticed it going in and tried to back off, but you’re going 215 (mph) and I hooked Danica.

“The right front hopped or something and it took a hard left.”

That hard left caught the right rear of Patrick, sending her into the wall. Her car burst into flames as it headed back across the track and finally came to rest along the apron, and Patrick quickly got out of her flaming car and marched away.

When Logano tried to speak to her, Patrick appeared to brusquely brush him off.

“I told him, ‘I’m not sure if it was you, but I’m pretty sure it was you.’ Then he said it was a failure of some sort, which didn’t make me feel better in that moment,” Patrick said. “I hope Aric is OK. He’s definitely feeling the worst of everybody.”

Almirola was running about 10 spots behind Logano and Patrick when the crash occurred. He tried to slam on the brakes and slow down, but he started getting sideways as he made impact. The debris that was scattered across the track caused a red flag, stopping the race for nearly 30 minutes.

Patrick and Logano were running just outside the top 10 with 67 laps to go.

“A lot of us took a hard hit,” Logano said. “That’s the last thing you want to see.”

Overheating brakes had been a problem for several drivers Saturday night. Once the red flag was finally lifted and cars began rolling off, Clint Bowyer told his team over the radio he was concerned about the heat building up in his own brakes.

As for Patrick, it was the third time in four races that her night ended in a wreck. She also crashed out of the season-opening Daytona 500 and had engine trouble at Las Vegas.

All that misfortune had left her 31st in points entering the weekend, and has raised speculation that she might walk away from NASCAR’s top series after this season. Patrick talked openly about her frustrations earlier this week, and she bemoaned her rotten luck again Saturday night.

“I don’t understand why so much bad luck happens,” she said. “I mean, why? What else can I say? On the other hand, I was having a really good night and that’s what makes me the most mad. Every time I’m doing better, something stupid happens and I don’t know what to say about it.”