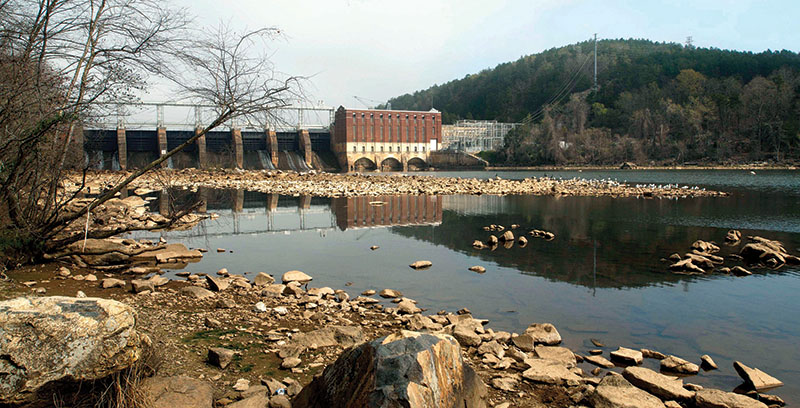 This March 2012 photo shows High Rock Dam, which was completed in 1927 at a height of approximately 101 feet. At full pool, High Rock lake has a surface area of 15,810 acres. Jon C. Lakey, Salisbury Post.

When a tropical cyclone centered itself over western North Carolina in 1916, rivers and creeks swelled, roads and bridges were washed away, dozens died and a number of local companies closed after the storm knocked out power across the region.

Onlookers at a nearby Yadkin River toll bridge watched as fully uprooted trees, house roofs, farm animals and at least one moonshine still floated by in the floodwaters, a 1916 Salisbury Post report stated.

In Salisbury, more than 600 people were temporarily without jobs after the Kesler Mill and Salisbury Cotton Mill closed because the storm knocked out power lines coming from a plant south of Charlotte, on the Catawba River, the Post said. It would take weeks before conditions fully returned to normal.

Water rushed down the Yadkin River at speeds of tens of millions of gallons per minute — a rate not seen since the historic storm — according to data provided by Salisbury-Rowan Utilities.

Despite the historic nature of that storm, its flood levels are not the highest numbers measured by river gauges near Salisbury.

That flood occurred before the construction of High Rock Dam, built in 1927. In the nine decades since the dam’s construction, flood levels on the Yadkin River near Salisbury have topped 1916 several times. In 1972, for example, the flood topped 1916 levels by 3.5 feet. In 1987, river levels reached a height 4 feet higher than 1916.

The city of Salisbury in 2003 shelled out $450,000 to relocate the transformers. Salisbury-Rowan Utilities also spends about $200,000 per year for consultants who analyze ways to protect the city’s water intake, pump station and Grant Creek Wastewater Treatment Plant — all of which have been subject to flooding.

The cause of rising flood levels since the 1916 event can be tied directly to the construction of High Rock Dam and steady deposits of sediment into the area, said Salisbury-Rowan Utilities Senior Engineer Jeff Jones.

In the 90 years since High Rock Dam’s construction, the river has dumped massive amounts of sediment where it meets High Rock Lake. The result: acres of new land, more severe flooding from less severe storms and a water intake that’s threatened by the possibility of sediment flowing in.

“Really, the only thing the reservoir does for us is a detrimental impact with the accumulation of sediment and increased flood levels,” Jones said. “If you’ve got a cup with a certain amount of water and then you put so much dirt in that cup, it will just shift the water higher.”

But flooding and sediment buildup are not the only ways High Rock Dam has altered the Yadkin River. The dam also has altered water quality, said Yadkin Riverkeeper Will Scott.

More than 90 years ago, the site of what would be High Rock Dam buzzed with activity as laborers moved into the area to help build the facility. At the time, the reservoir created by the dam was projected to become the second largest artificial lake in the South.

In 1927, workers closed the dam’s lower gates as construction neared completion. Water filled the basin that would become High Rock Lake. Three other dams were completed downstream — Narrows Dam in 1917, Falls Dam in 1919 and Tuckertown Dam in 1962.

Dr. L.L. Williams of Richmond, Virginia, toured High Rock Lake in 1928 to investigate the potential for malaria and proclaimed the new reservoir “the cleanest new lake I have ever seen,” according to a Salisbury Post report at the time.

The lake Williams toured in 1928, at least its northern end, looked noticeably different than modern-day High Rock Lake, according to maps and aerial photography.

The earliest map available of where the Yadkin River meets High Rock Lake shows a relatively unimpeded stretch of water. Over time, the river created new land near the Wil-Cox bridge. Then, an elevated portion of the river bottom grew into a new island near Buck Steam Station. Later, even larger islands formed south of Buck Steam Station — about 10 miles upstream from High Rock Dam.

“Given a long enough time, it will fill up all the way to the dam, but that will take a very long time,” Jones said.

Riverkeeper Scott likened the creation of land inside the Yadkin River and High Rock Lake to a “miniature delta,” something more commonly seen at the point where rivers release water into the ocean.

As the river dumps its contents into High Rock Lake, sediment also builds up near the Salisbury-Rowan Utilities’ water intake. At a certain height, sediment can fall into the intake, damaging equipment used to pump an average of 8.5 million gallons of water per day, Jones said. In severe instances, the sand could cover up the city’s intake.

Because of that threat, a company mines sediment from the Yadkin River bed that’s later used in asphalt, Jones said. When mining stops, it poses the potential for major problems.

“After there was no sand mining from 1984 to 1988 and a really bad drought in 1987, there had to be ditch dug by hand from a channel on the north side of the river to our intake on the south side,” Jones said. “There were men walking around the water intake on sand.”

Salisbury-Rowan Utilities’ models show the Yadkin River dumps 200,000 tons of sediment into the High Rock Lake area per year. Sand mining only removes a portion of the total.

‘A choice about how we use the river’

Sediment accumulation is one issue, but there’s another problem Scott said he is concerned about.

For years, the Yadkin River and High Rock Lake have been considered environmentally impaired, according to the N.C. Department of Environmental Quality (DEQ). The department considers High Rock Lake impaired for several water quality indicators.

A 2016 assessment of North Carolina’s river basins ranked the Yadkin highest in turbidity, meaning it’s the cloudiest or haziest in the state. The report also shows the Yadkin contains the highest concentration of nitrogen and phosphorous, which are found in fertilizers. Chlorophyll  and pH are other parameters for which High Rock Lake does not meet water quality parameters.

Oxygen levels in water above and below High Rock Dam are low, too, he said.

“I think dams are a choice about how we want to use the river,” Scott said. “It’s about prioritizing things like power generation over things like water quality.”

Without dams at High Rock Lake and locations to the south, Scott said, the river could be able to naturally process a portion of nutrients such as phosphorous and nitrogen. Water quality would be significantly improved, he said. Natural rapids would also exist in the Badin Lake area, he said.

Jöbsis said dams often decrease the diversity of aquatic life because of water quality effects and other items.

“In a natural river system, you will have the right balance of aquatic life and the bacteria and micro-organism needed to process nutrients,” Jöbsis said.

Fishermen, however, see benefits from nutrients that pile up in High Rock Lake.

“The quality of the fish is amazing,” said local fisherman Glenn “Butch” Hudson.

Hudson said he’s aware of at least one 12-pound bass and several 8- or 9-pound bass caught in the Yadkin River basin during the previous year. Fishermen see the river differently than environmentalists, he said.

“Comparing the Yadkin Riverkeeper to recreational boaters, we say fertile and they say dirty,” Hudson said. “The Yadkin is what’s considered a very fertile river. People into bass fishing know there’s a lot of nutrients and good stuff for the fish to eat.”

Scott agrees that nutrients coming into the river can be beneficial for fish. At a certain point, however, nutrients such as nitrogen and phosphorous lead to algae blooms that kill fish.

Hudson, Jöbsis and Scott all said some fish and aquatic life previously found in High Rock Lake or the Yadkin River have become scarce or nonexistent. Before the construction of Yadkin River dams, for example, American shad routinely migrated from the Atlantic Ocean to Wilkesboro to spawn, Jöbsis said. Construction of dams now means such fish can migrate only so far.

“If the Yadkin were completely unimpeded, we probably would have ocean species in the river today,” Hudson said.

For all the environmental effects of High Rock Dam, however, there are many economic benefits, he said. It’s an economic engine, he said.

The shores of High Rock Lake, for example, are speckled with neighborhood and commercial developments such as Tamarac Marina.

Until recently, dams on the Yadkin River, including High Rock Dam, were owned and managed by Alcoa, which declined to comment for this story. The company in February completed the sale of its four Yadkin River dams to Maryland-based Cube Hydro, which plans to make improvements that could alleviate some water quality concerns.

One notable improvement will be the addition of technology that will improve oxygen levels in the water, said Neal Simmons, Cube Hydro’s vice president of research and development.

Through a partnership with General Electric, the company plans to install a completely new turbine design that will allow air to be injected back into water when it’s discharged from High Rock Dam, Simmons said.

“This set of blades has no equivalent anywhere in the world,” Simmons said. “It’s really going to be cutting-edge technology.”

Increasing the amount of dissolved oxygen will generally be beneficial for aquatic life downstream from High Rock Lake, said Simmons and others in interviews. In its current state, runoff from farms dumps nutrients into the Yadkin River, which creates algae blooms that consume oxygen, he said. Aquatic life needs oxygen in water to breathe.

Simmons called the new technology “a knob that can be pressed to improve the ecosystem.”

Sediment buildup is more difficult to address, he said.

“We don’t have as many knobs to turn, there,” he said.

One such efficiency improvement will be more constant flows of water discharged. Under Alcoa’s ownership, Yadkin River dams might run during the week, but wouldn’t discharge water during the evening or weekends.

“We are committed to sending water down through the system rather than pond and release,” he said.

Scott, the Yadkin Riverkeeper, says Cube Hydro “is saying all the right things.” He’s waiting to see how the company follows through on its plans.

Albert Aymer leaves Salisbury better than he found it