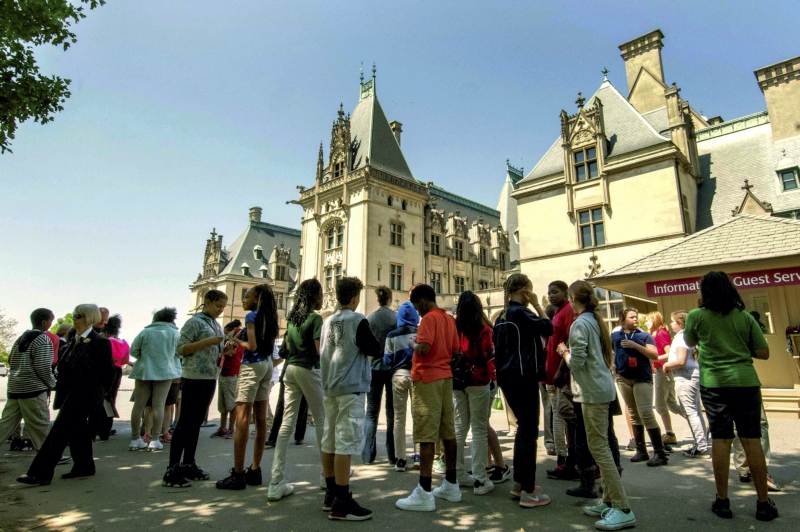 ASHEVILLE — The word that comes to mind is “awe” — or maybe “awestruck.” As the bus pulls around a curve revealing the long, green lawn and pale sandstone expanse of the Biltmore House, North Rowan Elementary fifth-graders break into gasps and shouts.

The students were told they were going to see a mansion, but the Biltmore — with its steep, pointed roofs, carved gargoyles and multiple wings — resembles a castle more than anything else.

As the approximately 80 students piled off the buses, they craned their necks to get a better view of the house and grounds. Students kept saying that the Biltmore wasn’t the size they expected. It was bigger.

“They’re thinking ‘house,’ and then we pull up and the house itself is four acres,” fifth-grade teacher Ashley Holshouser said, chuckling.

The Biltmore House is the country’s largest privately owned residence. Construction on the house began in 1889 by order of George Washington Vanderbilt II and took six years to complete.

For the majority of students, the trip was an entirely new experience.

“This isn’t a field trip, this is a life changing,” North Rowan Elementary Principal Katherine Bryant said early Wednesday morning as students lined up to board the buses.

According to Bryant, out of 80 fifth-graders, roughly 60 percent have never been to the mountains before.

“Most of ours know Spencer to Walmart,” Holshouser said. “But some of them have never been on the highway.”

Out of Holshouser’s class of 21, some 16 had never visited the mountains, she said.

The trip, paid for by a donation from Innospec in Spencer, is the first of its kind for North Rowan Elementary. But Bryant is determined it not be the last. Starting in the 2017-18 school year, her goal is that every student have the opportunity to visit the mountains and the coast by the time they move to middle school.

The goal is to broaden students’ horizons — to get them to think of life beyond high school, beyond Spencer. It’s a goal that teachers support enthusiastically.

“I want them to see that the world is bigger than their backyard,” Holshouser said.

At the Biltmore, the students split into groups and were guided around by a docent, listening to the tour through earbuds. Students gasped as they entered the first hall of the house, looking down at the marble floors or peering up at the high, intricately bricked ceilings.

While they listened to the tour respectfully, cameras clicked and cellphones were held up to snap pictures of the immense dining hall, the gold-leaf walls, throne-like chairs or the bright pop of orchids in the winter garden.

But that changed when groups walked out onto an open balcony offering a view of the 8,000-acre estate and the peaks of Pisgah National Forest. Students in Holshouser’s class rushed to the railing yelling and chattering excitedly.

“As far as you can see, the Vanderbilts own,” the docent said, “…What do you think of this backyard?”

Holshouser and Bryant hope that seeing more of the state will inspire students to begin thinking about what they want out of life — whether that’s a career or a dream of attending a college in the mountains.

“My hope is that they grow up and move out of just what’s in our town,” Holshouser said.

The trip serves another purpose — it helps students connect things they’ve learned in the classroom with things in real life. Whether that’s mountains, history or something unexpected they learn on the way. On the way up to the Biltmore Estate, Bryant used the time to review forces in motion with her students, using the cars making the drive up Interstate 40 with them to illustrate acceleration, deceleration and mass.

“Seeing their faces when they see the mountains or turned the corner and saw the house… It just put a place to things they’ve learned,” she said.

Her class also spent part of the year reading “Serafina and the Black Cloak,” a book set on the Biltmore Estate. Throughout the tour Holshouser talked to her students about the book, pointing out specific rooms or details and asking students if it was how they had pictured it.

When the tour reached the library, a key room for the fictional Serafina, student Ella Jones was entranced. George Vanderbilt was known for his love of reading, and the house’s library reflects that. According to Holshouser, Ella has read all of the books in the North Elementary library, and this year began borrowing books from the middle school.

“Imagine if I had this library,” Ella told her teacher.

Ella said she’s been to the Biltmore before, but loves to revisit the property.

“It seems so much cooler every time you visit,” she said.

Student Abbie Miller was excited to make the connection between the book she’d read in class and the real estate.

“It’s really cool and awesome to know that it’s real and not somewhere fake in a story,” she said.

Students said they were impressed with the dining room, the laundry, the indoor pool and the size and decoration of the house.

“I didn’t think it would have any lions or statues,” student George Maxwell said of the outside of the house, “I thought it would look plain.”

Innospec’s gift was originally a $5,000 donation raised by plant employees, meant to cover a large portion of the trip. But Bryant said the company ended up covering 100 percent of the cost, including tickets for staff, students and chaperones and two charter buses. When she came up with the idea, Bryant said she was told that sending the entire grade, including EC students, on a nearly 12-hour outing wouldn’t work. Students wouldn’t show up, or they wouldn’t get the funding.

But at the crack of dawn Wednesday morning, Bryant stood in the lobby of the school, surrounded by milling fifth-graders, and laughed.

“I think that’s my philosophy about this school,” she said. “If you believe in it, it’s going to happen.”