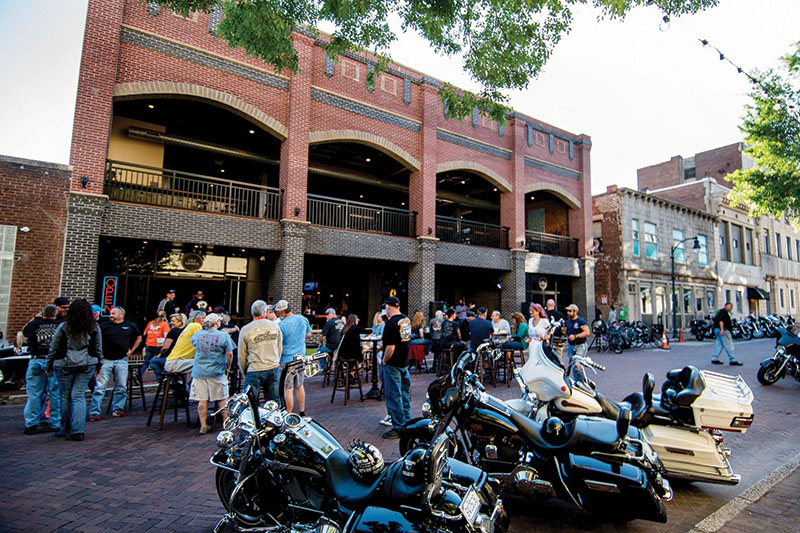 JON C. LAKEY / SALISBURY POST City Tavern on East Fisher Street held its first Bike Night with a live band, food and drinks. Fisher Street was blocked to through traffic except for motorcycles, bicycles and pedestrians. Tables were set up in the middle of Fisher Street. Monday, May 8, 2017, in Salisbury, N.C.

SALISBURY — In creating City Tavern, Todd Littleton wanted a place for families to enjoy a good meal, for music lovers to enjoy original tunes, and for beer lovers to appreciate a fine craft beverage.

“It’s not a bar, it’s not a restaurant, it’s a tavern,” says Littleton, a Salisbury native and longtime entrepreneur who opened City Tavern in November.

Located at 113 E. Fisher St., the building underwent an 18-month renovation which included complete gutting of what had original been four storefronts.

The restaurant has drawn rave reviews from its clientele, who include longtime fans of Benchwarmers, the bar Littleton owned on the spot previously.

City Tavern is open 11 a.m. to midnight, seven days a week. It has about 40 full-time and part-time employees.

“It’s a wonderful melting pot,” Littleton says, noting that diners might be surprised to find their favorite college hangout now filled with high chairs and booster seats. “This is like Benchwarmers 2.0.”

But, as Littleton says, it’s a lot more than a bar.

“To stay strong, you have to evolve,” he notes.

City Tavern represents just such an evolution, with exposed brick walls and ductwork, a U-shaped bar made of dark wood, and some tables made from reclaimed floors.

Littleton says it’s a place where he can bring his pastor after church on Sundays. “It’s just something Salisbury needed and didn’t know it needed.”

During the renovation process, the building façade fell off, so the project was actually considered new construction.

“It was an opportunity to bring a new style to a historic area,” he says.

The front patio features seating for 40, with large, glass, garage-style doors which are frequently raised, bringing the outside in. There are the same type of doors upstairs in The Loft @ City Tavern, an original music and comedy venue overlooking Fisher Street.

The restaurant hosted its inaugural Bike Night on May 8. But it wasn’t just for motorcycles.

“If you can pedal it in, you are welcome,” Littleton says, estimating there were about 75 motorcycles lining Fisher Street, shut down for the event.

“The bicycle racks were full, too,” says Cathi Brandt, who takes care of the tavern’s marketing and publicity.

The restaurant menu changes often, Littleton says. “We’ve got gourmet hamburgers, and our steaks are amazing. We make everything fresh daily, and everything is made in-house. It’s been a true joy to learn the food business. The food is the focal point.”

He adds, “We keep the menu fresh. You can come in every week and try something different. We encourage people to get outside the box that they’re in.”

And that’s perfectly fine with Littleton.

“The menu is a guideline,” he says. “If we can make it, we’ll do it. I’m not a restaurateur, I’m an entrepreneur. I know what irritates me when I go out, so I try not to do that here.”

Although Littleton envisioned The Loft as a spot for live music, he’s been surprised at the times it’s been rented for event space, receptions, corporate events and the like. National performers from The Comedy Zone in Charlotte appear each Wednesday night at 8 p.m.

“One of the things I’m high on building in Salisbury is the local music scene,” Littleton says. He’s doing that at Nashville Nights, which he also owns, but says the Loft is a place for original music. “This is more of a listening room. At Nashville Nights, we have cover bands and party bands.”

“The really cool thing about City Tavern is that, when you’re here, you don’t feel like you’re in Salisbury,” he says. “The food’s great and the beer’s great.”

City Tavern features some 42 craft beers on tap, with things you can’t buy on the shelves. Littleton says about 10 of those beers are staples, and include selections from New Sarum.

Like his neighbor and fellow entrepreneur Mikey Wetzel, owner of Go Burrito, Littleton would someday like to franchise City Tavern. He thinks it’s a great model for other historic downtowns similar to Salisbury.

“I absolutely love the downtown,” he says, “and I have extremely high hopes for downtown Salisbury. We have a plan for the future. More restaurants are coming in. We have outstanding theater and entertainment. We’re missing the music block, which I’m hoping to bring. There are so many good things here. This is my basket, and all my eggs are in it.

“I think Salisbury is a special place. I really do.”