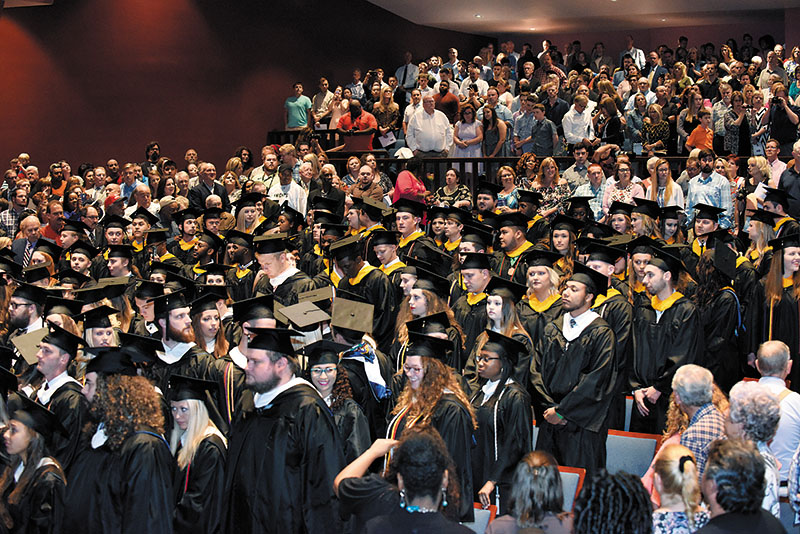 Catawba seniors entering the auditorium for graduation. photo by Wayne Hinshaw, for the Salisbury Post

SALISBURY — Amid the smiles and celebration at Catawba College’s morning graduation, there were also a lot of tears. In addition to awarding 210 degrees to day program students, the college also bid goodbye to three long-serving faculty members.

The ceremony, held 10 a.m. Saturday in Keppel Auditorium, is the 166th graduation held by the Catawba community. Students and speakers expressed pride in the Class of 2017’s accomplishments and hope for the future.

“You’re beginning a new stage of your life,” Bill Graham, chair of the Board of Trustees and local lawyer, told graduates.

As they turned their gaze towards the rest of their lives, he told them that “it’s not what you do know — it’s what you don’t know.” They never knew who they would meet, or how relationships with people might change. Graham was in the same graduating class as his future wife in 1983, he joked — though he didn’t know it until later.

Whatever the future held, Graham said he knew the students would shine.

“You’ve reached a milestone in your life, and you’re about to start another one. …Now go do great things. Be the Catawba we know you can be,” he said.

Senior Class President Israel Suarez gave his fellow students some advice as they moved towards the future: to give as much as they could, to grow old but not to grow up, and to live simply.

But most of all, they should remember that better things were yet to come.

“You’re living life wrong if your best years are behind you and not before you,” he said.

Three retiring faculty members were honored for their service to the college. Dr. Paul Baker, Dr. Janice Moore Fuller and Dr. Rhonda Truitt will not be returning to the college in fall. The professors have approximately 82 years of service to Catawba between them.

“You think of the contributions they have made…and it only scratches the surface,” college President Brien Lewis said.

During their time at Catawba, the three professors have coached and inspired hundreds of students, and there were cheers and tears as the graduating class applauded them.

Dr. Phillip Burgess, director of choral and vocal studies, burst into tears after the Catawba Singers performed “Morning Glow” by Stephen Schwartz. Seniors among the singers broke out of formation and gathered around Burgess on stage to comfort him and give group hugs.

When the stage cleared, Lewis encouraged students to live a life of service and dedication, and to follow their dreams, intuition and hearts.

“I trust that we have not only provided you knowledge, but have strengthened and broadened the medium of your hearts. …No matter where your journey takes you, our Catawba will always be here to welcome you home,” he said.