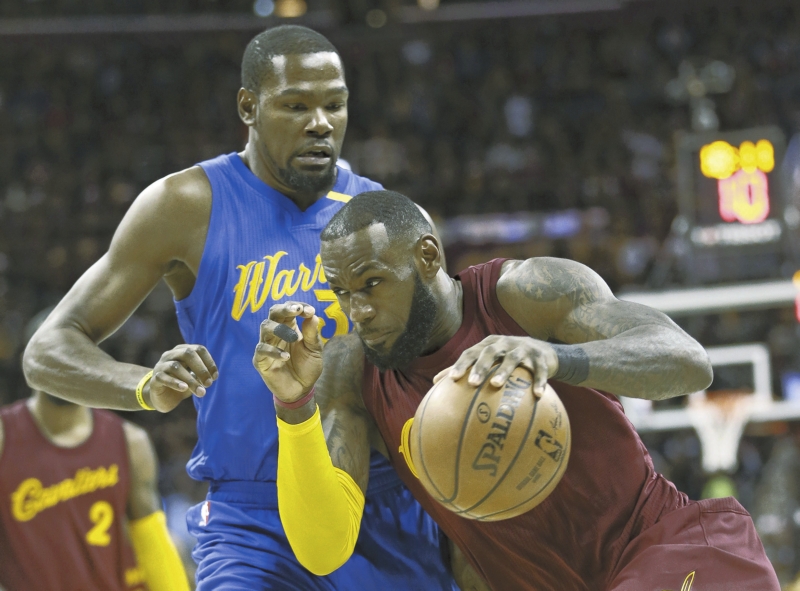 FILE - In this Dec. 25, 2016, file photo, Cleveland Cavaliers' LeBron James drives against Golden State Warriors' Kevin Durant during an NBA basketball game in Cleveland. Now, as James, Durant and their teammates wait on the next opponent for the respective conference finals, the world is watching as they move their unblemished, 8-0 teams ever closer to an anticipated Cavs-Warriors rematch that might finally come to fruition at last in a matter of weeks. (AP Photo/Tony Dejak, File)

Legacies are all about championships.

Or the Buffalo Bills.

While the Golden State Warriors may be on the greatest three-year run in NBA history — at least during the regular season — they need another title to solidify their place as one of the best teams ever.

“We want to redeem ourselves,” Klay Thompson said, remembering that crushing loss to Cleveland in last year’s finals. “It’s a new slate and we’re chasing that trophy. We want it back oh so badly.”

The Warriors’ success over the last three regular seasons is unprecedented for the NBA, and is challenged by only a handful of teams in the other major U.S. sports. The NHL’s Montreal Canadiens of the mid-1970s are certainly in the mix. And you can throw in a few teams from the NFL, though having by far the shortest schedule skews those numbers quite a bit.

Back to the NBA, where not even Michael Jordan and all those great Chicago Bulls squads of the 1990s posted an .841 winning percentage over a span of 248 games. That’s what the Splash Brothers & Co. have done, putting up a pair of 67-15 seasons and a record-breaking 73-9 mark a year ago.

Of course, Jordan’s Bulls won six titles over a remarkable eight-year run, and it might’ve been eight-for-eight if Jordan hadn’t decided to take an ill-timed swing (and a miss) at baseball right in the midst of his prime.

When it comes to the dynasty power rankings, the Warriors aren’t close to Chicago.

Maybe they will be someday — Stephen Curry, Kevin Durant, Draymond Green and Thompson are an astonishing accumulation of talent, and all are still in their 20s — but the defending champion Cavaliers have one big edge.

The same edge that Jordan’s Bulls enjoyed over everyone else.

The greatest player in the world.

Like Jordan, LeBron James is capable of almost single-handedly carrying a team to the title. He certainly proved that in last year, willing the Cavaliers back from a 3-1 deficit — the last two victories coming on the road — for a shocking triumph over the record-breaking Warriors.

To its credit, Golden State shook off that defeat with another stellar season, the blow softened not long after Game 7 by the signing of Durant.

So, here we go again. If the Warriors get past the wily San Antonio Spurs in the Western Conference final, they will likely find King James in their path again.

Both teams cruised through the first two rounds of the playoffs, sweeping each series in four straight games. The Warriors have been especially dominant, winning by an average of 16.5 points with all but one game decided by double-digit margins. But Cleveland is right there with them, blowing out Toronto in the second round after four much-tighter wins over Indiana.

James has been nothing short of spectacular, averaging 34.4 points, 9.0 rebounds and 7.1 assists in the postseason.

He’s got his Jordan-like gaze focused squarely on a second straight championship.

“We’re chasing something. We’re not protecting anything this year,” Curry said. “Obviously we have the best record, but we’re not defending a championship. There’s really no pressure.”

Well, let’s not go that far.

If the Warriors come up short again, the road to a dynasty-defining title figures to only get bumpier.

The Bills learned this after the first of four straight Super Bowl appearances ended with Scott Norwood missing a last-second field goal that would’ve pulled out a victory over the New York Giants in 1991. Buffalo never again got so close to a title, losing the next three title games by an average of nearly 22 points.

Then there are the Braves, who later on in 1991 began an unprecedented streak of 14 straight division titles. They managed only one World Series title during that nearly decade-and-a-half of excellence, denying them a place among baseball’s greatest dynasties.

Much like the last year’s Warriors, Atlanta seemed poised for a second straight title in 1996, dominating the first two games of the World Series at Yankee Stadium by a combined score of 16-1. But the Braves lost the next four games — three of them at home — and changed forever how that team would be viewed for posterity.

Yes, Atlanta would add nine more division titles to its streak, stretching all the way to 2005. But there would be only one more World Series appearance, resulting in a four-game sweep by the Yankees in 1999.

The Warriors seem intent on avoiding a similar fate.

They’ve rested players. They didn’t panic when Durant went down for an extended period with a knee injury. They appear to realize that the regular season means nothing if they don’t win their final game.

“The most important thing is that we have a vision,” said Ron Adams, Golden State’s assistant coach and defensive guru. “We know how to bring this vision to fruition.”

If not, it’s going to be another long summer.

And another big hit to their legacy.