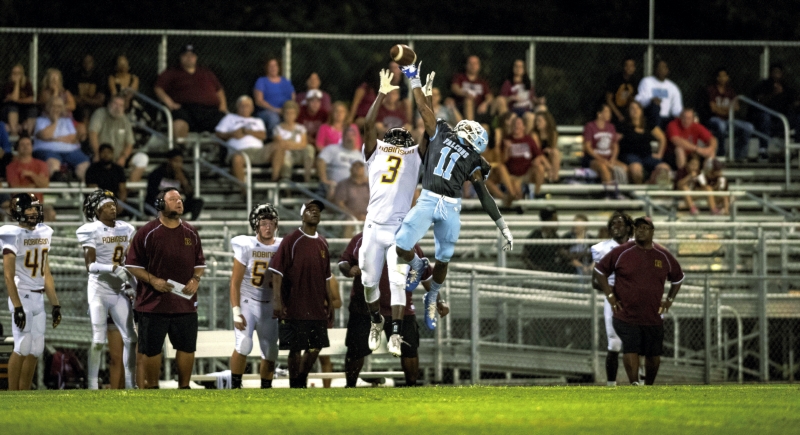 JON C. LAKEY / SALISBURY POST West Rowan’s Deyquan Byrd (11) breaks up a pass for Robinson’s Javonte Misenheimer (3) during a 21-19 win last season on Sept. 9, in Mount Ulla. Byrd recently announced that he will continue his education and football career at Catawba College.

MOUNT ULLA — His initials are D.B, and that’s definitely what Deyquan Byrd was born to be.

The West Rowan star came down with nine interceptions last fall, the most by a Rowan County player since 2007. All those picks were for his school, his teammates and his coaches, but mostly they were for his mother, Eboni Byrd.

“My mom has gone over and beyond for me for a long time,” Byrd said. “Making her proud has been my motivation, and she’s the reason I made it to a college signing.”

“Byrd is a reliable guy, a great character kid, and he’s got that special confidence and swagger that you need to play cornerback,” Nixon said. “Everyone gets beat some, but when he gets beat, he can move on to the next play.”

Byrd began his career later than most college signers — in middle school. He remembers being a linebacker at West Rowan Middle for his first four games, but then he was moved to defensive back. He’s been in the secondary ever since.

He moved into the varsity starting lineup at West as a sophomore. As a junior cornerback, he allowed only six completions and zero touchdowns and made All-South Piedmont Conference. He only had one interception, but that was mostly because teams stopped targeting receivers on his side of the field.

“I’d credit the hard work and the preparation I put in each week,” Byrd said. “I do everything I can, whatever it takes, because I don’t want to let my teammates down.”

West’s secondary was the team’s biggest asset in a 10-4 season in 2016. The Falcons had 26 picks, the most they’ve had in a season in this century, and Byrd was first team All-Rowan County and well as repeating on the All-SPC squad.

“We talked a lot about creating turnovers and Byrd made so many big plays,” Nixon said. He’s long, he’s physical, he’s athletic, and he’s smart.”

Twice Byrd intercepted two passes in the same game. He had a pick in West’s big South Piedmont Conference victory against Robinson and another in the second-round playoff win against Crest as the Falcons shut down prolific receiver Tyshun Odom.

Byrd accounted for two pick-sixes as a senior, including one against Hibriten in the third round of the 3A state playoffs. He took that one back 68 yards.

“That last interception for a touchdown meant  a lot to me, even though we lost,” Byrd said. “That was my last high school game. High school football was a great experience for me, and I wanted to go out with a good play.”

Actually, Byrd (5-foot-11, 190 pounds) will get to play in one more high school game. He and Carson cornerback Brenden Westbrook, another Catawba signee, were selected to play in this summer’s East-West All-Star Game.

“We both have a chance to make an impact at Catawba,” Byrd said. “It’s going to be fun competing with Brenden and playing on the same team with him.”

Byrd and Westbrook also have competed in recent seasons in the track and field jumps. Westbrook was second in the long jump in Saturday’s 3A Midwest Regional at Marvin Ridge for second place. Byrd, who was out quite a while during the track season with a hamstring injury, soared past 20 feet and placed sixth.

Byrd, who has 4.6 speed, was recruited by a number of schools, but his college decision came down mostly to St. Andrews and Catawba, schools where he would be eligible to play right away and have a chance to be on the field as a freshman.

“Catawba was the place that stuck out to me the most, and it’s also a place where I can play in front of my family and friends,” Byrd said.

Byrd could be a force on special teams. Besides being a great cover guy and someone who can make plays in the air, Byrd is fearless racing down to cover punts and kickoffs. He’s an aggressive, tough and instinctive tackler.

“He was a great player for us,” Nixon said. “I’m excited about seeing what he can do at Catawba.”

Salisbury girls fall to CATA in 2A soccer playoffs