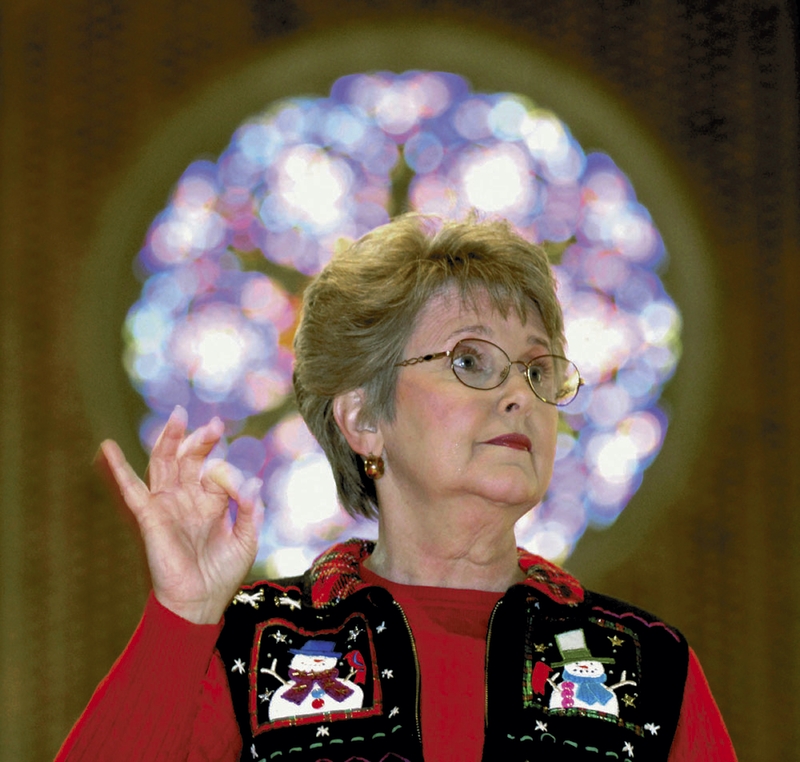 Rosemary Kinard, founder of the St. John’s Men’s Chorus and its only director since 1994, will lead her final concert with the group next weekend.

The concert will be at 4 p.m. May 21 in the sanctuary of St. John’s Lutheran Church, 200 W. Innes St. in downtown Salisbury.

“I’m so proud of how ready they are,” Kinard says of the 50-member group, composed of men from all over the community. “I’m really thrilled with the concert program.”

The concert theme is “Grace,” which Kinard says has been present throughout her life. “I just feel like grace is what it’s all about.”

The men will sing three pieces based on “Amazing Grace.”

“If you didn’t know, you wouldn’t realize they’re based on the same piece of music,” Kinard says.

Rob Durocher, St. John’s minister of music, wrote a brass processional for “Guide Me Ever, Great Redeemer,” another of Kinard’s favorite hymns. Cellist Kevin Agner will perform, along with other instrumentalists and the St. John’s Handbells, led by Kimberly Lentz.

Because the Lutheran church is celebrating the 500th anniversary of the Reformation this year, the choir will sing a new setting of “A Mighty Fortress.”

“I can’t tell you how gorgeous this setting by Dan Forrest will be,” Kinard says. “We’ve done a lot of things by him. That’s where I’m afraid I’m gonna lose it, if I do lose it.”

While Kinard is stepping away from leading the Men’s Chorus, she will continue in her role as associate parish musician at St. John’s, leading the flute ensemble, and assisting in the 11 a.m. worship service as a flutist, pianist, organist and vocalist.

“Rosemary has been bringing musical joy and inspiration to our congregation and community for so very many years, and I count it one of the greatest blessings to have the opportunity to partner with her in our music ministry,” Durocher says. “There is nothing that she tackles that hasn’t been lovingly and meticulously thought out, planned and rehearsed for worship and concert presentation.

“While it is bittersweet for all of us that she is stepping away from directing the Men’s Chorus, which under her leadership has been one of the crown jewels in music ministry for 23 years, it is also wonderful to know that she will still be very much a part of ministry here at St. John’s as our associate parish musician, where her many musical gifts will continue to bring glory to God and lift our spirits.”

“Rosemary is a treasure to St. John’s and the entire Salisbury community,” he says. “Not only is she an outstanding director, but she’s passionately committed to using the arts as a rich and beautiful expression of faith. When Rosemary sings and when she directs, you can see the image of her creator.”

Seeing the relationships formed over the years, Kinard says, “has been a beautiful thing to watch.”

The ministry created by this group, she adds, has been fulfilling to her personally as well. It’s like having 50 children, she says, and watching them grow and appreciate one another as a family.

“They’re very caring toward one another. They’re just an amazing group of human beings who happen to sing together. They love music, and they love to sing.

“It’s a bittersweet time, but I know this is the right thing,” she adds. “When it gets right down to it, you hate to let it go. I will look forward to hearing the chorus under someone else’s direction and know that person has worked hard. It will be in good hands.”

Raised in Alabama and Florida, Kinard has degrees from Asbury College and Appalachian State University. She retired in 2007 after 20 years as head of the choral program at Catawba College. She is a member of the Salisbury-Rowan Symphony Society’s board of directors. She and her husband, Karl, have four adult children and six grandchildren.

Next Sunday’s concert will benefit Community Care Clinic. A nursery will be provided.