Grasshoppers among the new hits at MLB concession stands 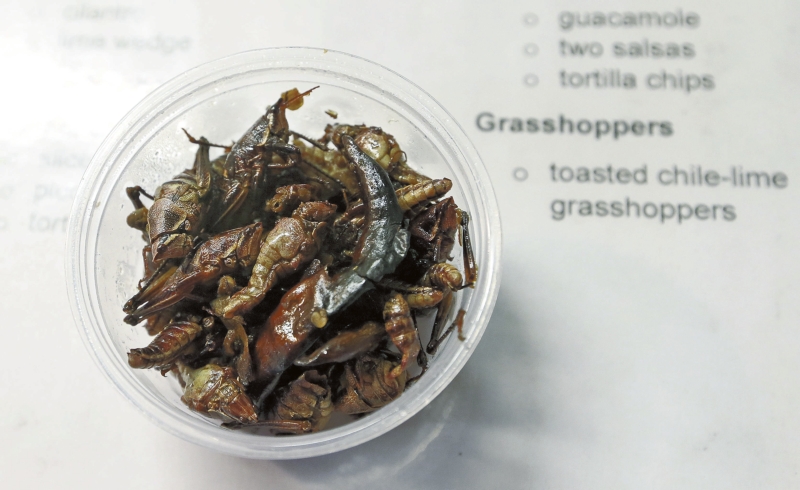 Toasted chile-lime grasshoppers are displayed on a menu at a baseball game between the Seattle Mariners and the Los Angeles Angels Tuesday, May 2, 2017, in Seattle. (AP Photo/Elaine Thompson)

The idea of serving edible grasshoppers at a baseball game isn’t as crazy as it sounds.

The Seattle Mariners brought that curious offering to their ballpark this season, and although it might have seemed like a head scratcher to many fans and foodies, this crispy snack was more than just a quirky attention grabber.

“This is like an authentic local delicacy,” said Diana Evans, a vice president of strategy and marketing for Centerplate, the Mariners’ hospitality partner. “We’re thrilled that people are excited about it.”

The chapulines — toasted grasshoppers with chili-lime salt seasoning — arrived at Safeco Field this season courtesy of Poquitos, a Mexican restaurant in Seattle that serves them. For those fans who could wrap their minds (and mouths) around the idea of eating insects, the item proved quite popular, selling out during the opening home series.

In an era when ballparks are constantly trying to add new features and attractions, spicing up the menu can be an easy way to enhance the experience for spectators. There will always be room for hot dogs, popcorn and peanuts, but Seattle’s experience with the chapulines shows how a creative new food offering can become the talk of baseball for a little while — and any team can pull it off.

Although fancier food items can create some buzz at the ballpark, there are constraints. Fans do still want to watch the game, so a dish might not work if it’s hard to eat or takes a long time to make.

Here are some more exotic culinary offerings from around baseball this season:

The Diamondbacks unveiled their original Churro Dog a couple years ago — a churro inside a Long John doughnut, topped with frozen yogurt, whipped cream and chocolate sauce. The new version at Chase Field features Oreo cookie crumbs and strawberry topping.

Dodger Stadium was already famous for its Dodger Dogs. Now you can order a burger that includes a grilled Dodger Dog on top.

Toronto reliever Jason Grilli has embraced the nickname “Grill Cheese” — and he designed the Grilli Cheese sandwich at Rogers Centre, with a portion of the proceeds going to Jays Care Foundation.

“Sometimes, simple is best. You don’t need to think too far outside the box to come up with an idea that really captures the imagination of the fans,” Freireich said.

A few years ago, the Rangers began selling a Texas-sized hot dog that came on 2 feet of bun. Globe Life Park is now home to the M.V.T., which features the 2-foot hot dog stuffed in a tamale and covered in Texas Chili, nacho cheese and sour cream.

Kansas City shows off its barbeque prowess at Kauffman Stadium with this pulled pork item that includes onions, cheese, bacon and jalapenos. The bun is made of funnel cake.

“While it may seem a little exotic, if you will, the truth is that the flavors really work well with one another,” Freireich said. “From the sweet and savory aspect of things, there might be skepticism on the part of fans, but moreso than not, the reaction is very favorable and positive.”

DO Cookie Dough Confections, a New York City cookie dough shop that’s been all the rage recently, has an outlet at Citi Field.

Target Field has introduced this flatbread sandwich with Korean-style barbecue beef topped with kimchi and a boiled egg. It’s sold at a concession stand named for Andrew Zimmern of “Bizarre Foods” fame.