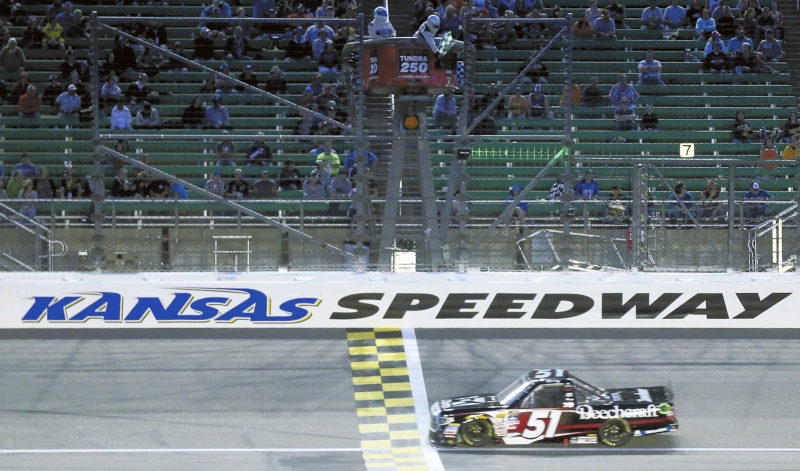 KANSAS CITY, Kan. (AP) — Ryan Blaney was all alone atop the leaderboard Friday during qualifying at Kansas Speedway.

He probably felt all alone on the track, too.

Blaney earned his first career NASCAR Cup pole for Saturday night’s race, but only after traffic jams at inspection prevented 11 cars from getting on the track. Among the big names that failed to turn a lap were Jimmie Johnson, Dale Earnhardt Jr., Clint Bowyer and Kasey Kahne.

The left just 28 cars for Blaney to beat for the right to start up front.

Joey Logano will start second and Martin Truex Jr. third, while drivers that failed to get through inspection will start at the back based on car owner points.

“This is just, wow. Super disappointing,” Bowyer said. “You’re off 10-thousandths of an inch? It’s ridiculous. Most people can’t even understand how little that is. I get it. If you’re off, you’re off, but I watched my guys move the car and adjust the car accordingly for it and then actually overcompensate on it because we were worried about not making it. Then they wheel it back in and fail the exact same amount? Twice? That makes no sense. None.”

NASCAR has been closely monitoring tech stations this season, resulting in several cases where numerous cars failed to take the track. But the 11 cars that sat parked in the garage at Kansas was the most this year, raising red flags at a time the sport is trying to keep and attract fans.

“The only thing I’m not too sure about is how so many cars cannot get through,” said David Ragan, whose care also failed inspection. “Everybody is not trying to cheat on the same thing.”

NASCAR changed qualifying tech procedures this year, which could be partly to blame for the trouble. Teams only go through a quick safety and fuel cell check prior to practice, though they can voluntarily go through any of the four technical areas, so many don’t know they’re out of compliance until they’re trying to get on the track for qualifying.

Teams are also required to go through the entire inspection process again if a car fails any of the stations, a time-consuming endeavor that has contributed to the long waits.

NASCAR vice president of competition Scott Miller said most of the trouble has been at the laser inspection, which is a significant performance metric and an area where teams push the limits.

“It’s fairly disappointing that they can’t present their cars to pass inspection,” Miller said, adding that there are built-in tolerances that give teams some leeway. “They want to be right on the limit and 11 of them were over the limit.”

Meanwhile, Johnson and Earnhardt will be among those starting at the back.

“A lot of cars didn’t get a chance to go out and a lot of cars had trouble,” Johnson said. “I’m not the best at qualifying anyway, so this takes all the pressure off me and what I have to do behind the wheel, and I love passing cars. There’s a lot of room on this track so we’ll be just fine.”

KANSAS CITY, Kan. (AP) — Kyle Busch picked up right where he left off in the Truck Series at Kansas Speedway.

Only three years had passed.

Busch hopped into the No. 51 Toyota of his own Kyle Busch Motorsports and roared to the front early Friday night, winning the first two stages before taking advantage of leader Ben Rhodes’s engine trouble in the closing laps to take the checkered flag.

It was Busch’s fifth victory in his last 10 starts in the series going back to 2015, and came after a victory at Kansas in May 2014 — the last time he drove a truck at the venue.

“It was really fast out there,” said Busch, who will try to defend his Cup Series win at Kansas on Saturday night. “We tried to pick and choose whether we wanted to be fast in a straight line or have better handling, and we chose more downforce and it worked out for us.”

Rhodes, who crashed jockeying for the lead on the final lap a year ago, opened a big lead on Busch during the final stage when the Cup Series regular ran into lapped traffic. But when a puff of white smoke came out of his truck with seven laps left, Rhodes had to pull down pit lane.

Still in search of his first win, Rhodes slammed his steering wheel in frustration.

“We ran with the best tonight,” said Rhodes, who blamed a piece of debris that went through his radiator for the engine blowing up. “We did everything right but Ben Rhodes has a curse on his back of something because something always goes wrong.”

Busch, who won the spring Cup race a year ago, cruised the final few laps to win once again at the track that once game him so much trouble. He stopped at the start-finish line and got the checkered flag tossed down to him, then paraded briefly along the front stretch.

The win was the 47th for Busch in the Truck Series, leaving him four back of the record set by Ron Hornaday, and one he thought belonged to Rhodes in the final laps.

“That’s one of the worst ones to swallow right there,” Busch said. “Ben had that race won. That one was his. I was trying everything I could to chase him back down, but I just didn’t have enough speed. He was just a little bit faster.”

There were five caution flags during the first 40-lap stage, including one that came out when Wendell Chavous hit the wall hard coming out of the fourth turn. All the yellows turned the stage into a six-lap sprint with Busch, who started 10th, quickly taking the lead.

Bell chased him to the line in second and Sauter was third.

The series points leader, Bell continued to jockey with Busch throughout the second stage with Rhodes giving chase. Busch moved to the front during a long green-flag run to sweep the intermediate stages with Bell and Rhodes finishing second and third.

With scoring up, only tweaks proposed to college basketball