Salisbury girls fall to CATA in 2A soccer playoffs 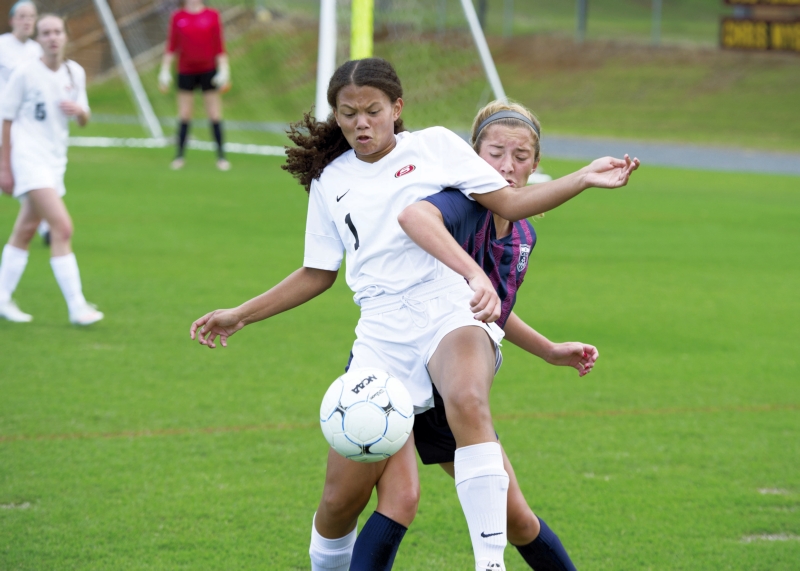 Jimmie Anderson/for the Salisbury Post ... Salisbury’s Bethanie Stauffer fights for possession of the ball against CATA’s Josie Studer during Saturday evening’s state 2A soccer playoff match at Ludwig Stadium. Studer scored all four goals for the Cougars in their 4-3 win.

SALISBURY — It will go down as a second-round knockout, but don’t be fooled.

Salisbury’s exit from the 2A state soccer playoffs Saturday was a testament to tenacity, achieved by the narrowest of margins when Central Academy of Technology & Arts’ Josie Studer scored the winning goal with fewer than 11 minutes to play.

“I just told the girls … ‘No tears,'” coach Matt Parrish said at lively Ludwig Stadium, where the Hornets were dealt a season-ending, 4-3 loss. “They can be sad that the four seniors we’re losing are pretty significant players. But if we’re crying because of the result on the field, that means we left something out there to regret. We didn’t. We didn’t have anything to regret.”

Salisbury (17-2-2) suffered its first loss at home and was on the losing side of the post-game handshake line for the first time since March 1. CATA (15-8-1), a squad loaded with club-calibre players, won its seventh straight match and advanced to next week’s third round.

“I was really pleased with all the plays that led to passes, that led to goals,” said winning coach Jay Niessner, a Catawba College graduate. “We put it together, but give credit to Salisbury. They came to fight today.”

The Cougars outshot Salisbury, 15-8, and scored four goals against a tight-fisted defense that had yielded only nine all season. The first came at 6:09 of the first half, when Studer fired CATA’s first shot on goal past senior keeper Juliana Anderson.

“That’s our game,” Studer said after scoring four times. “We came out aggressive and scored first. None of it came easy, but sometimes you have to put everything on your back and carry the team.”

“We realized very quickly that this team, when they got the opportunity, would finish plays,” senior defender Nellie Brown said after playing her final match. “Down 2-0 that early, you’re automatically in the mode of being embarrassed. We had to find that switch and turn it on.”

Parrish realized the Hornets were in trouble and considered marking Studer with junior midfielder Julia Honeycutt. “She didn’t surprise us at all,” he said. “We had two girls kind of shadowing her. We considered putting Julia on her — and not to make any excuses, but she can’t walk. She turned her ankle two weeks ago and hasn’t been right since. Any 50-50 ball she gets into is bad news.”

That idea was scrapped and Plan B was hatched: make Struder — a long-legged striker who boasts speed, grit and skill — work for every ball.

“We tried,” said Honeycutt. “But she was too good. The only thing we could have done was man-up on her. She was just better than our back line.”

It was teammate Maria Capito who gave the Hornets renewed life late in the first half. The junior forward took a pass from Ceci Cardelle and trimmed the deficit to 2-1 with a downward header that bounced past CATA keeper Morgan Garrett.

Honeycutt tied the score 18 seconds into the second half on a storm-the-castles play. Salisbury flooded the crease with hungry snipers looking for a feast. When the ball squirted to Honeycutt, she carefully slid a grounder toward the right post that Garrett deflected over the goal line.

“That goal told us we were still in this,” said Honeycutt.

They were until Studer netted her third of the game at the 10-minute mark. She dribbled down the right side, accelerated past a defender and toe-poked a 15-yard shot into the far left corner.

“These are the playoffs,” Niessner said. “I told her to be selfish. When she got the opportunity, she put the ball in the net.”

Again Salisbury responded in dramatic fashion. Only 15 minutes remained when sophomore Rainey Dunham tied the score, 3-3, on a quick-thinking conversion play at the doorstep. Cardelle launched the play with a cross inside to Katie Bullock, who’s low, hard shot was stopped but not secured. Dunham pounced on the rebound for her third goal of the season.

“I was about to beat myself up because I thought I should have been there,” said Cardelle. “And then out of nowhere, there she was, doing exactly what she was supposed to do.”

It all went for naught moments later, when Studer crowned the evening with her royal finish. Teammate Ally Burnett sent a long pass through a midfield seam that reached the 18-yard line. Studer gobbled up the feed, took aim and didn’t miss.

When it was over, there were no tears.

“This season was an accomplishment,” Cardelle said with a smart smile. “We worked really hard, gave it our all and held our own today. We were resilient.”

Added Brown: “This game makes us sad, but not because we lost. It’s because we’re leaving … because it’s over. That’s the saddest part.”