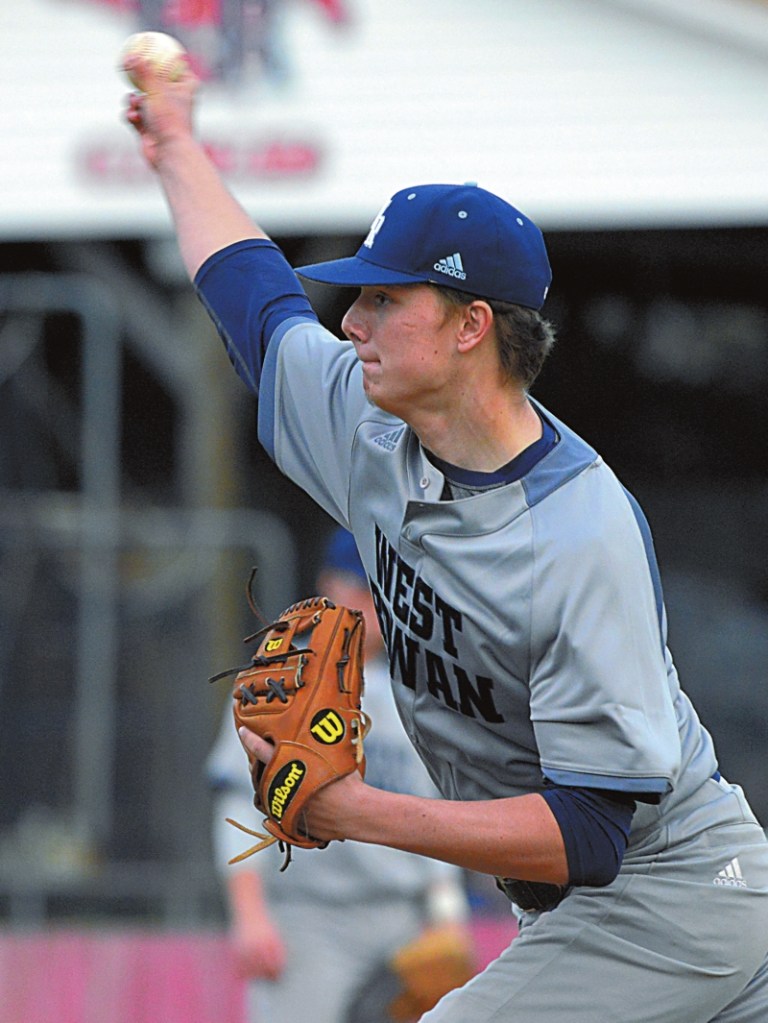 Wayne Hinshaw file photo/for the Salisbury Post ... West Rowan’s Olen Stamper, shown during an earlier game this season against East Rowan, pitched a no-hitter Thursday night against Pisgah, in the second round of the state 3A baseball playoffs. The Falcons won the game, 1-0.

MOUNT ULLA — Fourth-seeded West Rowan will dip into the third round of the 3A state baseball playoffs — and it’s all Olen Stamper’s fault.

The junior right-hander pitched a no-hitter Thursday night as the Falcons slipped past visiting Pisgah, 1-0, in an epic, second-round performance.

It was an exhilarating gift of a game, one that lifted West (20-6) into Tuesday’s third-round match-up with fifth-seeded A.C. Reynolds. Stamper struck out nine, walked one and retired 16 of the last 17 Pisgah hitters.

“He was phenomenal tonight,” boasted West catcher Trevor Atwood. “Right from our bullpen (session) before the game, he was locating every pitch, every time. You could tell he was going to do something special.”

There was only one questionable play that may have sullied Stamper’s no-no. It unfolded with one out in the top of the second inning, when Pisgah’s Trey Morgan dropped a near-perfect bunt along the third-base foul line.

“It was in no-man’s land,” Stamper indicated. “A perfect bunt. Trevor called me off and tried to make a play, but it was almost impossible.”

Atwood pounced from his crouch behind the plate and circled the ball, then fired high over the heads of first-baseman Pearce Wilhelm and second-baseman Brandon Walton — both of whom were covering first base.

“There was some confusion,” said Atwood, who threw out two Pisgah runners attempting to steal. “The ball almost died and I rushed the throw because I had to. I spun around and lost track of (the target). It was definitely an error.”

Bears’ coach Harold Shepard agreed when asked about the play afterward. “Their catcher threw it away,” he said. “It’s a no-hitter.”

West coach Seth Graham also accepted that outcome. “I was initially mad because we should have thrown (Morgan) out,” he said. “Brandon was on the bag, but Atwood didn’t expect Pearce to be there. He fielded the bunt the proper way. He just didn’t execute the throw.”

Pisgah (14-8) had three baserunners, though two were erased by Atwood. The guests, who arrived with 70 stolen bases this season, never put a runner on second base and finished with only one man left-on-base.

The hard-luck losing pitcher was right-hander Jaxon Reid, a junior who retired 13 straight batters between the second and sixth innings. A five-game winner, he struck out three, walked none and scattered five hits.

“He’s lost some close games this year,” said Shepard. “And that was a tough game to lose. Sometimes you have to fail to get stronger mentally.”

Reid was hit hard in the bottom of the second, when West scored the game’s only run. Stamper opened the inning with a loud double to left-center field and was replaced by courtesy runner Luke Waggoner. Mid-season call-up Jake Perez followed with a terrific at-bat, fouling off a couple of 1-2 pitches before grounding a single to center that put runners at the corners with none out.

“That shows how much he’s improved,” said Wilhelm. “Earlier in the year he wouldn’t have done that. I don’t know if anybody on our team would have battled that hard.”

A botched delayed-steal play sent Waggoner to the dugout and Perez to second base with one away. Wilhelm delivered the run when he barbecued a 2-2 pitch that bounced to the center-field fence for an RBI-double.

“I was trying not to strike out,” Wilhelm conceded. “Just trying to put it in play and move the runner up. It turned out pretty good for us.”

It did. Stamper finished his gem with a 1-2-3 seventh, his fourth perfect inning. The game ended when he snuck 1-2 curveball past Pisgah’s Noah Burnette for a called third strike.

“At that point I wasn’t worried about a no-hitter,” he said after his 102-pitch effort, just three tosses away from the maximum allowed. “I was just trying to keep them from scoring. That last pitch, I wanted to bend it across the plate. Trevor called it, a 1-2 curve. It’s the same one I wanted.”

NOTES: This was the third no-hitter by a Rowan County pitcher this spring. Carson’s Owen White and South Rowan’s Walker Joyce previously turned in their own gems. It was West’s first no-hitter since Austin Love threw a controversial, five-inning one on April 8, 2016. … A.C. Reynolds (17-6) advanced with an 8-1 second-round victory against Weddington. The Rockets have won five of their last six games, including a 2-1, first-round nod over Central Cabarrus on Wednesday.