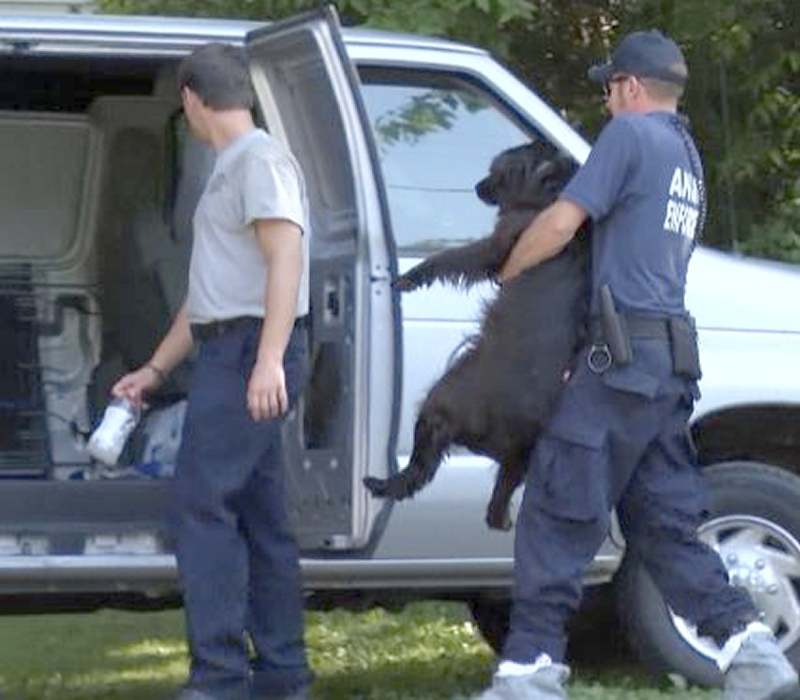 Law enforcement and animal code enforcement officers responded Wednesday to a Lincolnton Road home after they received complaints from neighbors about foul odors and cruel treatment of animals there. Photo by David Whisenant/WBTV

SALISBURY — Rowan County authorities on Wednesday seized five dogs from a house owned by a well-known animal advocate after complaints about the conditions in which the animals were living.

No charges have been filed.

Williams said in a report that he investigated an animal cruelty call Monday at the Lincolnton Road home. A caller to the animal shelter said there was a strong odor coming from the property.

The caller also said six dogs living in a penned-in area full of feces were not being cared for. Animal Control also received a complaint on behalf of the Eaman Park pool requesting a wellness check on the animals.

Williams’ report said when he went to the home, he saw three dogs that did not look to be in distress or in need of medical attention. The only water he saw was a plastic kiddie pool that contained dirty green water, sticks and leaves. A neighbor let Williams onto his property so he could get a better look behind the house.

A neighbor said the smell was unbearable, especially during the summer, from feces that had piled up over the years. Williams saw a large brown dog that had been scratching itself, had patches of fur missing, patches of thickened skin and open wounds. The officer said a smaller white dog was in need of grooming. He did not see any water for the dogs, and the area where they were contained had a lot of feces, his report said.

Williams said he had gone to the property earlier and spoken with Hart about the same white dog, which had matted fur then. He told her to have the dog groomed and she did, the report says.

Another neighbor said she noticed a small brown dog that was dead in the yard a few months ago; the next day, it was gone. The same neighbor reported at least 16 cats in the home and was told by Hart there were more.

A neighbor said Hart went by the house only late at night a few nights a week and never stayed there. She was seen entering the garage area, then leaving. The same neighbor said there was a rat problem in the neighborhood that he blamed on Hart’s property.

Williams said that during a visit, Hart refused to let him inside the house or garage. According to the report, Hart owns the Lincolnton Road property but lives in Charlotte.

When officers went to the home Wednesday, they found two malnourished dogs that had maggots eating their hair and flesh. Three other dogs appeared to be “grossly overweight,” the warrant said.

Officers did not find dog food or fresh water. Williams said he looked through a window and saw large amounts of feces on the floor and could smell urine.

City Communications Director Linda McElroy said Thursday that the property was inspected with the owner’s consent and did find housing code issues.

“We have not issued a determination at this time on whether the house is habitable,” she said.

Hart has been among the most vocal and engaged animal advocates in Rowan County. She helped lead a discussion between Rowan County and philanthropist Christine Morykwas that led to construction of a new wing for cats at the Rowan County Animal Shelter. The county named a room in the cat wing for Hart.

In 2015, Hart was appointed to serve on a task force to suggest improvements at the animal shelter.

Rowan County Commissioner Craig Pierce, who has been heavily involved in the county’s animal control improvements, said Duke Energy turned the power off at the house and removed the meter Wednesday.

“Animal Control went to the house last summer and the odor was so horrific that adjacent neighbors at the pool were complaining. At that time, we found conditions that were not as bad as the ones found more recently,” Pierce said.

He said firetrucks were needed at the house Wednesday because “the odor was so strong  … you couldn’t go in without a respirator.”