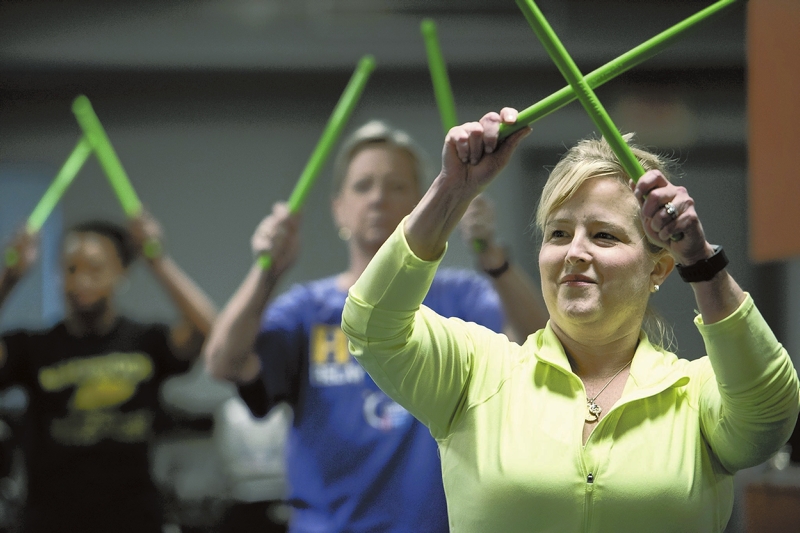 Kim Robinson, a local nurse who was diagnosed with Lyme disease in May 2015, works out in a hospital rehabilitation class to stay active to help in the battle against the illness. Photo by Robin Baltimore

Milder winters have meant a boom in the deer and white-footed mouse populations — which in turn means a boom in the tick population. The increases the threat of Lyme disease this summer.

Since May is Lyme Disease Awareness Month, the warning is a timely one. Lyme disease is an insidious illness — tricky to diagnose and daunting to treat, once it moves into the chronic stage. Patients often don’t realize they’ve been bitten by a tick until their illness becomes chronic.

Lyme disease is caused by a corkscrew-shaped bacteria carried by ticks. According to the Centers for Disease Control, early symptoms (three to 30 days after a tick bite) include flu-like symptoms and a rash, sometimes in a telltale bull’s-eye shape. Later signs and symptoms (days to months after a tick bite) include severe headaches, neck stiffness, rashes on other areas of the body, severe joint pain, facial palsy, heart palpitations, dizziness or shortness of breath, inflammation of the brain and spinal cord, nerve pain, shooting pains, numbness or tingling in the hands and feet, and problems with short-term memory.

The key to treating this disease, like many others, is early detection. It can usually be cured by a two-week course of antibiotics. Patients with chronic Lyme disease often have success with a combination of therapies, according to Kim Robinson, a local nurse who was diagnosed in May 2015.

“Every single body is different, and every single body and mind has different needs,” she says. “So I feel we have to find our own balance between traditional medicine and functional and/or integrative medicine, alternative therapies, dietary changes, exercise, and all of those things which affect one’s health. What works for one person, as we all know, does not work for everyone.

“Lyme is a time-sucking, inconvenient, expensive, all-consuming illness to treat. Not everyone wants to treat it any more than anyone wants to have it.”

Her physician, Dr. Bruce Lantelme, is founder of Robinhood Integrative Health in Winston-Salem. He is considered a Lyme-Literate Medical Doctor — that is, one who treats the disease. In a 20-page primer about Lyme disease he shares with his patients, Lantelme writes of the “Lyme Wars” between physicians who do treat the disease and others “who do not feel their literature supports the chronic entity of Lyme.” In the middle, of course, are patients who are extremely sick.

“It is no wonder that patients with the debilitating illness of Lyme disease have found getting well rough sledding,” he writes.

Local patients with Lyme disease do have somewhere to turn. Two years ago, a Lyme disease support group started in Rowan County. It now has about 20 active members.

“We discuss different treatments and what’s working for each of us,” says Doug Robinson, one of the founders of the group. (He is not related to Kim Robinson.)

The group also discusses how the disease affects families and careers.

“A lot of folks really don’t understand this disease,” Doug Robinson says. “There’s also a division in the medical community. We just talk through these things and try to support each other in our daily struggles.”

Patients and their family members say they wouldn’t wish it on their worst enemy.

Kim Robinson has seen progress by being treated with IV antibiotics the past two months. She also eats healthfully and keeps active by walking and taking yoga classes.

“It doesn’t matter what a person has going on healthwise, moving seems to be the key to healing lots of things,” she says. “I don’t want to get to where I can’t move. That is my biggest worry.”

She suspects she has had the disease since she was a child growing up in Connecticut, where so many cases of Lyme have been reported.

A local mom who’s been to support group meetings says her two sons, now 33 and 27, have also had symptoms all their lives. They were both diagnosed in 2011. Her older son found help through Chinese medicine and now practices acupuncture, treating others with Lyme disease.

Her younger son is permanently disabled, she says. “Every day is a struggle. We’ve been to every kind of specialist you can imagine. It’s just been incredibly frustrating and expensive. If you do have symptoms, find a Lyme-Literate Medical Doctor. There can just be so many symptoms that affect your whole body. Lyme disease is a bad dude.”

“I would not wish the last 30 to 40 years of strange things on anyone,” Kim Robinson says. “I cannot change my genetics, but I can take good care of myself and hope to seem less tasty to ticks. It’s going to be a ticking time this summer, so please protect yourself, use DEET products, and shower as soon as you come in from outside.”

Celebration of Hope, the support group for Lyme disease, meets from 4 to 6 p.m. on the first Sunday of each month at St. John’s Lutheran Church. For details, call Elizabeth Williams at 704-636-3190.