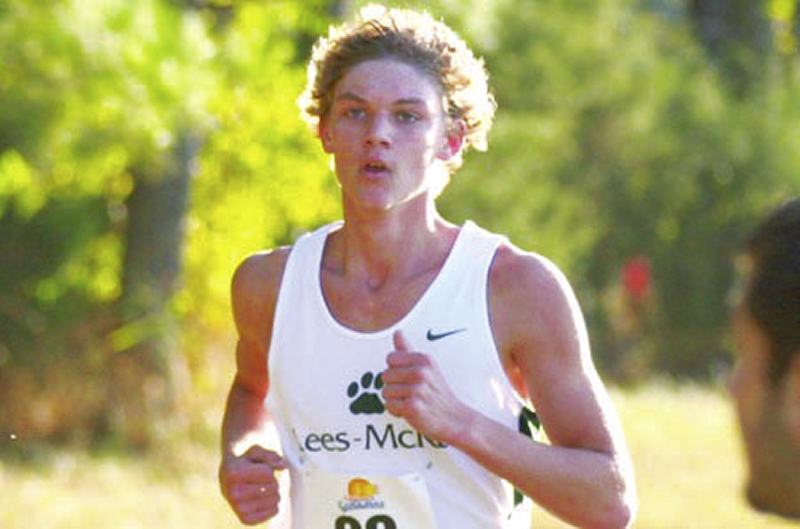 BANNER ELK — Cody McNeely didn’t compete in outdoor track in high school, as his spring seasons were spent as an outfielder on the West Rowan baseball team.

McNeely’s hidden talents were speed and endurance, and they surfaced in a big way in his collegiate career. He won three Conference Carolinas championships in the 800-meter run and he recently was named the male track athlete of the year for Division II Lees-McRae College.

“I do wonder sometimes what might have happened with track if I’d worked on it more in high school,” McNeely said. “I’ve only been running the 800 for four years, and my coaches have told me that runners usually keep improving for a lot longer than four years. But I don’t regret any of the time I spent with baseball. A lot of my friends were on the baseball team, and there are a lot of good memories from hanging out with them.”

West cross country/track coach Scott Foster recognized that the wiry McNeely, 5-foot-11, 140 pounds, had the potential to be an outstanding runner.

“I knew he could be something special the first time I saw him run when he was a freshman at West,” Foster said. “That was my first year coaching cross country, and I didn’t know a lot about distance running, but I could tell Cody was different. Most kids, it looks like they’re working so hard when the run, but Cody made it look so easy.”

McNeely ran cross country in the fall in high school, posting solid, although not incredible times. He was all-conference twice and was All-Rowan County as a senior in the autumn of 2012, when he placed ninth in the county meet with a clocking of 17:40. He was West’s top runner that day, but he finished a minute behind the winner, Carson’s Kyle Gillis.

In the winter of his senior year at West — between the cross country and baseball seasons — McNeely gave indoor track a try for the first time. He competed in the high jump, 1,000 meters and 4x8oo relay. He ran a respectable 1,000 time — 2:50.90.

“I believed Cody had Division I talent, but he really didn’t get looked at by many schools because he’d never run outdoor track,” Foster said.

It was cross country that opened the door for McNeely to continue his athletic career in college.

“Running cross country for Lees-McRae was a way to help pay for school,” McNeely said. “I hadn’t really even thought about track.”

During McNeely’s freshman year in Banner Elk, Lees-McRae’s coach broke cross country practice down into small intervals. There was a lot of emphasis on finishing kicks.

That led to McNeely experimenting with the 800 and 1500 during the indoor track season.

In the Hilton Garden Invitational in  Winston-Salem in late January 2014, McNeely ran 2:08.89 in the 800. He was 58th out of 73 runners in a mostly Division I field, but that was where his career burst out of the starting blocks.

A week later, he ran 2:05.48 in Boone, and he knew what he was born to do athletically. By late March, as the snow melted in the mountains and the outdoor season got rolling, he was running 2:03.

“I started focusing on the 800, really, and I just kept getting faster and faster,” McNeely said. “You’ve got to love it to keep getting better, but I do love it.”

McNeely has competed well in cross country for four years and placed 17th in the 8K Conference Carolinas Championships as a senior,  But track, specifically the 800, is his thing.

“Last year’s conference meet was where I made a jump,” McNeely said. “You’re running two 800s in the conference meet, a prelim and then the final. I remember we took it out way too fast in the prelim, but I ran 1:54.02, taking almost two seconds off my PR. Then in the final, I ran even faster — 1:53.83.”

McNeely’s latest PR is the 1:52.88 he put up about six weeks ago in a meet at Montreat.

His winning time in the conference meet in late April was a slower 1:57.16, but he wasn’t disappointed.

“That was one of those strategic races, not a race where you’re going to get a PR,” McNeely explained. “I knew the pace was slow, but I just stayed with the leaders. Then the last 200 meters was an all-out sprint, and I had a good enough kick to win.”

McNeely will be running today in a “Last Chance Meet” at North Carolina A&T as he tries to post a strong enough time to qualify for the Division II Nationals that will be held May 25-27 in Birmingham, Ala.

“It’s going to be a fast field and a fast track, and I may have to run 1:50 to qualify,” McNeely said. “Beating my best by two seconds, I don’t know if that’s possible, but at least I’ve got a chance.”

While McNeely never competed in outdoor track for the Falcons, his success story has had an impact on Foster’s current West teams.

“Cody has been a big influence,” Foster said. “He normally comes to cross country workouts during the summer and track practices during his fall and spring break. We’ve used some of Cody’s 800 workouts with Cameron Butler and Andrew Burgess to get them ready for  regionals.”

McNeely, who turned 22 on May 2, was a regular on the academic honor roll. He graduated on May 6 with a degree in athletic training, and he’s passed his certification exam. Next, he’ll be applying to physical therapy programs.

McNeely’s outstanding college career has carried on a family tradition. Gary McNeely, Cody’s grandfather, was one of the first star athletes for West Rowan when the doors opened in 1959. Cody’s parents are Greg and Monica McNeely.

“Everything  just worked out for me in college,” McNeely said. “I’ve had a really good run.”