West Rowan cruises in first round of baseball playoffs 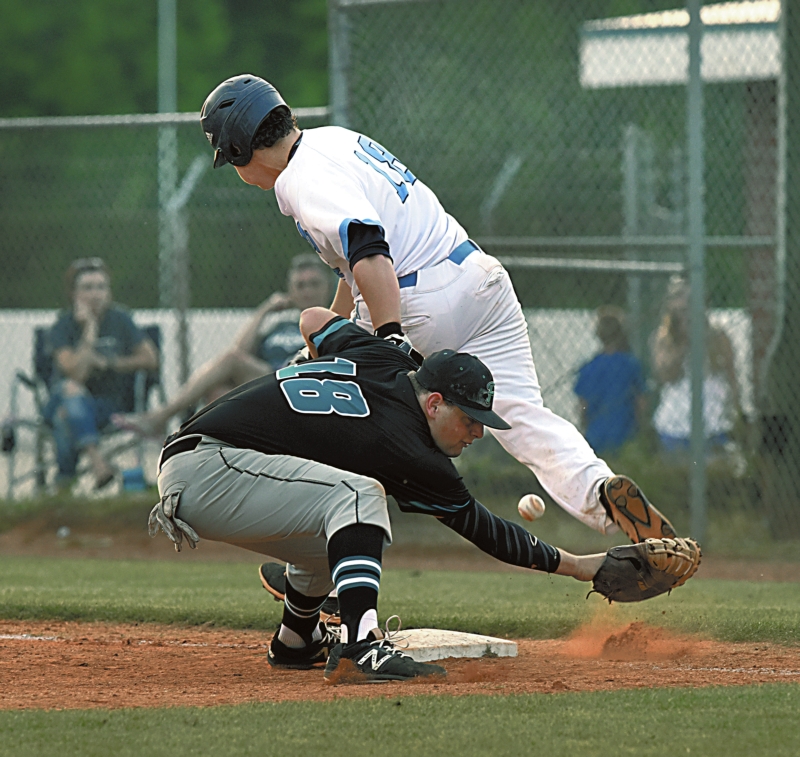 Wayne Hinshaw/for the Salisbury Post ... West Rowan’s Pearce Wilhelm (18) is safe as the baseball gets away from Forestview first baseman Jason Odem, during Wednesday night’s state 3A playoff game at Mount Ulla. The Falcons won, 7-1.

That’s how long West Rowan’s baseball team has been festering over its two most recent disappointments — last season’s first-round loss to Concord in the 3A state playoffs and last week’s abrupt exit from the South Piedmont Conference tournament.

“Those two left a bad taste in our mouths,” coach Seth Graham explained Wednesday night. “It was always there, in the back of our minds. What you do is practice and find a way to turn a negative into a positive.”

Against that backdrop, the Falcons wheeled out the desert cart and helped themselves to a savory 7-1 victory against visiting Forestview in their state playoff opener. It didn’t erase any stains, but lifted West (19-6) into tonight’s second-round match with Pisgah.

“That was the whole plan of this game,” infielder Brandon Walton said. “Not to do what we did last year.”

Not to worry. West sprayed 11 hits around the ballpark, played errorless defense and received another command performance from winning pitcher Austin Love. The right-hander tossed a complete-game four-hitter, struck out seven and induced nine groundouts.

“They had an outstanding pitcher who limited our opportunities,” said 12th-year Forestview coach Brian Horne. “And they swung the bats a little better than we were told. Against their lineup you have to concentrate on every pitch.”

West catcher Trevor Atwood agreed. “We put 11 hits on the board,” he said with a nod to the Falcons’ pedestrian .252 team batting average. “That’s not usual. We not only hit, we hit in key situations.”

Forestview (11-13) barely had time to wipe its feet on the post-season welcome mat when it ran into trouble. Facing right-hander Justin Helms — a senior with seven victories and a 0.75 ERA coming in — West jumped to a first-inning lead on Walton’s towering, two-run double to the gap in left-center field.

“It was against a shift — a high, outside fastball,” the lefty-swinging Walton said after connecting on a 1-2 pitch. “As soon as he threw it, I knew where it was going.”

It plated teammates Brett Graham and Love, who circled home from first base after pumping a single to left, and gave West all the scoring it would need to prevail.

“What I liked was Brandon’s two-strike approach,” said Coach Graham. “He fouled off some pitches to get to that pitch and finally got one he could handle. That was big. It’s always good to give Austin some early run support.”

Love carried a one-hit shutout into the fourth inning before the Jaguars got on the scoreboard. Man-sized first-baseman Jason Odem drilled a one-out double to left-center, advanced to third on a groundout and scored on Billy Todd’s infield hit to the left side.

“You feel like you’ve dug a hole when you get behind 2-0 against a guy who’s going to UNC,” said Horne. “It puts pressure on your hitters, but I thought that run would keep us in the game.”

It did until West responded with three unearned runs in the bottom of the fourth. Pearce Wilhelm and Mykal Berger opened with punch singles to left — and when Logan Sproul’s sac bunt was overthrown down the right-field line, the Falcons had a 4-1 lead with a runner on third and none out. Atwood’s two-out single gave West a four-run cushion.

Helms, who had a low-80’s fastball,  was pulled after Walton plunked a leadoff single to right in the last of the fifth. Reliever Carter Smith was tagged for two runs — one of them unearned. He yielded Stamper’s RBI-double to left and another run when Forestview catcher Holt Cloninger fired a mishandled third strike into the right-field corner.

The rest was up to Love, who threw first-pitch strikes to 21 of 27 FHS batters. He retired the side in order in the top of the seventh, using his 90th pitch to coax a game-ending groundout.

“I did a good job keeping the ball down in the zone and getting ground balls,” he said after winning his sixth game. “That’s alway my intention — make them put the ball in play because I’ve got a good defense behind me.”

NOTES: Stamper, Walton, Sproul and Wilhelm each had two hits for the Falcons. … Love’s ERA dilated to 0.85. He’s fanned 63 batters in 49 1/3 innings. … Tonight’s second-round game with Pisgah (14-7) is scheduled for 7 p.m. The Bears advanced with a 5-0, first-round win against McMichael.