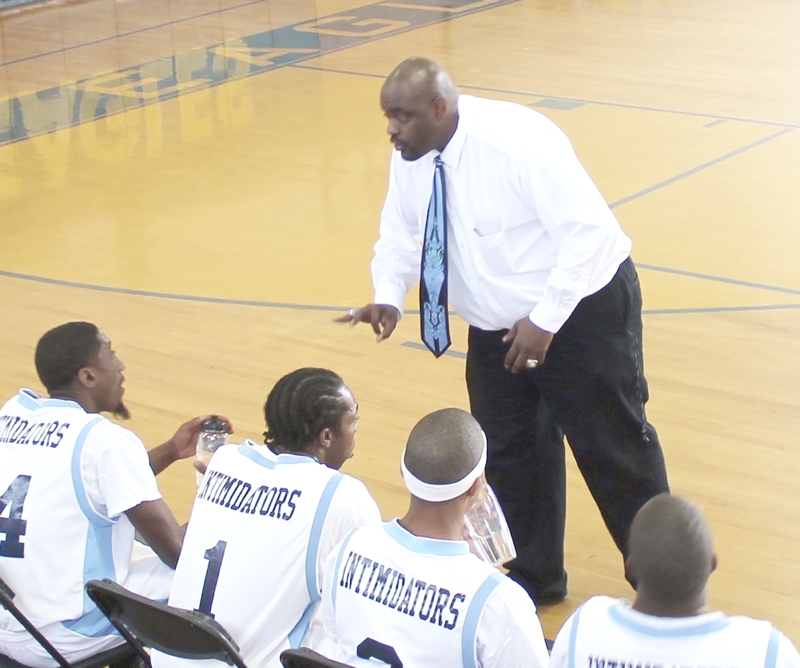 With National Volunteer Week just ending, Rowan Vocational Opportunities’ Ted Oglesby is a prime example of how community service and volunteerism can lead to a successful outcome.

Oglesby is a 1989 graduate of Salisbury High School. He played high school basketball for two years before injuring his knee, which ended his basketball career. After he enrolled at Livingstone College, family financial problems led him to leave school and help his family. He got a job and went to work.

Oglesby is an avid sports fan and still had a burning desire to coach basketball at some level.

After marrying Betty Jones and starting a family, his patience and persistence began to pay off. His oldest son began playing basketball in elementary school, and Oglesby seized the opportunity to become a volunteer coach in the Junior Hornets youth league.

Oglesby had the itch to get more involved in coaching.

“As I considered my options and opportunities, a wide range of thoughts raced through my mind,” he said. “Am I prepared? Am I really ready for the kind of commitment and responsibility that will be required.”

He eventually changed jobs and began working with people with developmental and intellectual disabilities. His supervisor noticed how well he got along with his clients and asked him if he would be interested in becoming a Special Olympics coach.

“As I began working with DD/ID individuals, I became inspired by their commitment and determination to succeed at whatever they tried to accomplish,” Oglesby said. “When I started assembling my teams, I began to see other consumers gravitating toward me. That’s when I began to realize that I was having a positive effect on them off the basketball courts and athletic fields.”

After working his way through the ranks, Oglesby became head coach of Rowan County’s five-on-five Special Olympics basketball team. He has coached the team for more than 15 years, and his teams have won 10 state championships and finished runner-up several other times.

The coaching bug had bitten him, and he branched out into bocce, golf and volleyball. He won a national championship in the golf skills competition.

“Special Olympics can help transform people from a dull, mundane existence into an active participant in numerous fun-filled activities,” he said.

“Lasting friendships, camaraderie and good sportsmanship are emphasized while we help participants improve their fitness and mental alertness,” Oglesby said. The Special Olympics motto is an outstanding example of self-determination and perseverance. It states, ‘Let me win, but if I cannot win, let me be brave in the attempt.’ ”

Oglesby is the confidential shredding manager and an innovations tech at Rowan Vocational Opportunities, where he trains clients to assist with shredding and learn work-related tasks.

“At RVO, we strive to help consumers understand their capabilities are far more important than their disabilities,” he said.

Oglesby also is involved in church and community activities. Each month, he volunteers as a DJ for the monthly Shakers dance sponsored by the ARC of Rowan for adults with developmental and intellectual disabilities.

Oglesby is an active member of his church, Believers Beyond Borders, where he is involved with the youth ministry, as well as being church photographer and videographer.

He still finds time to dedicate to his family. His wife, Betty, is employed by Rowan-Salisbury Schools. His oldest son, Tyree, is an Army veteran who served two active-duty tours in Afghanistan. His daughter, Tamara, is a recent graduate of the University of North Carolina at Pembroke. Trey, his youngest son, is an athlete in the eighth grade at Southeast Middle School.

“Salisbury is my hometown, and it brings me great joy to see my efforts benefit others. I could not ask for a better family or support network,” he said with a smile beaming on his face.

Rowan Vocational Opportunities Inc. is one of 16 United Way agencies, along with the ARC of Rowan.