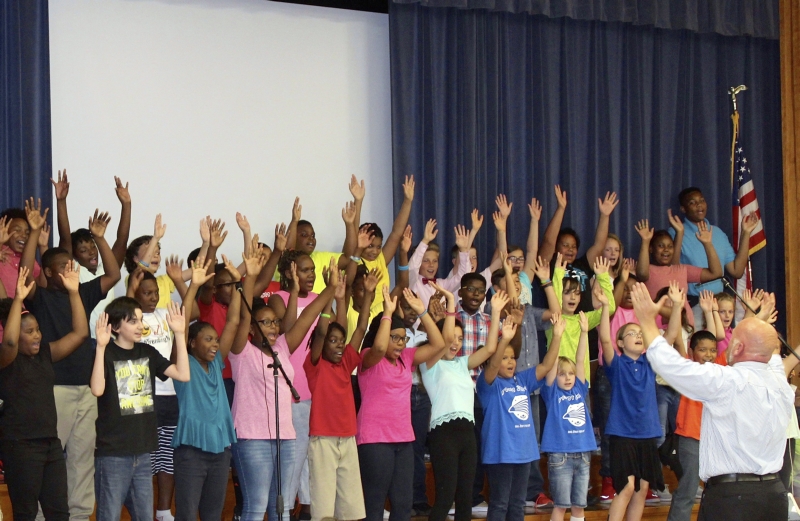 SALISBURY — More than half of Overton Elementary School’s student body performed in the “Overton Rocks” concert this past week.

Maria Lewis, a kindergarten teacher who has been at Overton for 28 years, said she can’t recall ever having a schoolwide program and certainly not one of this magnitude. The main reason it hasn’t ever happened  — or at least not in a long time, she said — is because it is a tremendous undertaking.

But music teacher Glenn Sherrill seemed to do it with such ease, she said.

Sherrill is split between Hurley Elementary and Overton Elementary. It is his first year at Overton, and he is at the school only two days a week, but this did not hinder him from directing an upbeat concert. Songs included “It’s About Respect,” “Blue Suede Shoes,” “Locomotion,” “Jump to the Rhythm,” “Give Me the Beat” and “Tutti-Frutti.”

Students also performed dance moves that went along with each song. Sherrill said he believes programs should be alive. Audience members also danced and jumped around while listening.

“I believe wholeheartedly that if a school program is approached as being ‘just a performance’ that we have missed the bus on a great opportunity. The process teaches more character building lessons than we will ever realize. Overton showed that they can overcome obstacles, work together and continue to grow. I am very grateful to have been challenged with this first school wide program,” Sherrill said.

Candice Austin, Overton’s principal, said she was thrilled to see so many families attend the performance.

“Mr. Sherrill is a wonderful asset to our school and he did an amazing job planning the program, along with support from our other enhancement teachers, Kristen McGloin, Sharon Wooten and Craig Johnson,” she said.

After the musical performance, families watched a demonstration from Overton’s new Jump Rope Club. Third-, fourth- and fifth-grade students demonstrated short-rope, long-rope, and double-dutch skills they have learned since the club began in January. Head coach Rosemary Wood led her jumpers through the demonstration, along with assistant coaches Brenda Williams and Amy Cole. Families then had refreshments on the front lawn of the school.