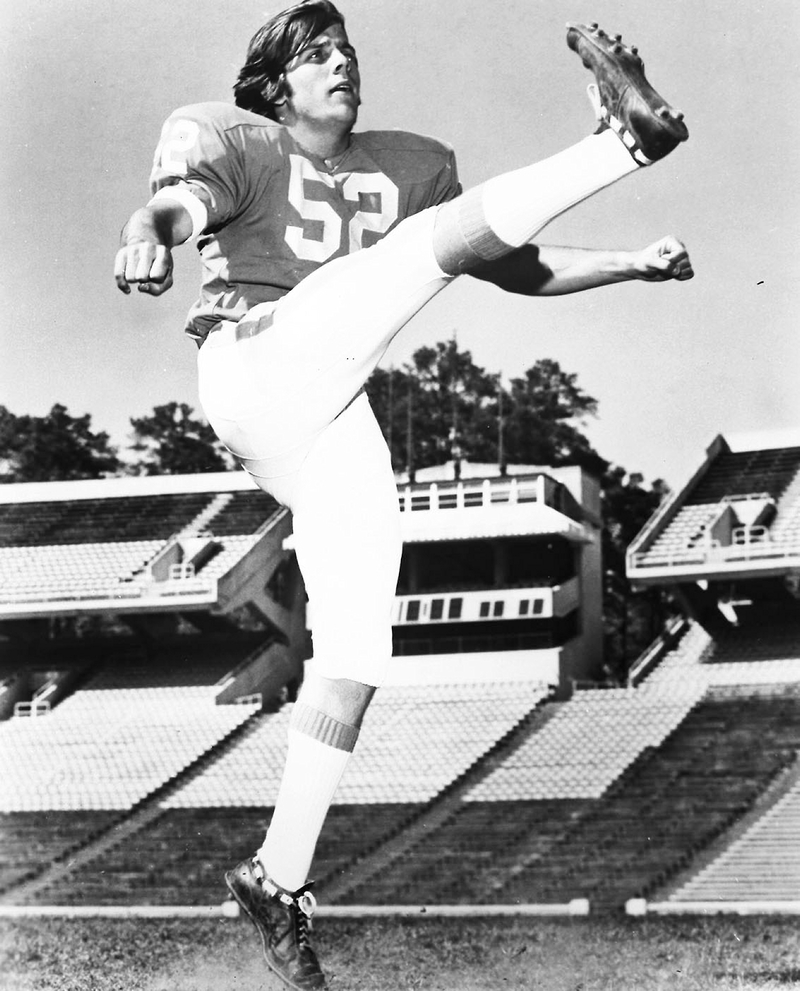 Rowan County Sports Hall of Famer Ellis Alexander, shown during his days as the University of North Carolina’s kicker in the 1970s. Alexander, who resided in the Atlanta area, died Monday after a period of declining health. Alexander is from Salisbury and was a standout athlete at Boyden High School.

SALISBURY — Ellis Alexander, a Rowan County Sports Hall of Famer and one of the memorable players from a golden era of football in Salisbury, passed away on Monday.

“We won a lot  (83-20-10 in 10 seasons), not just because we had such special players, but because we  had really good people,” Stout said. “You can’t win without good people. Ellis was a great person.”

Stout said Alexander’s graduating class of 1971 — guys who were seniors on the football field in the fall of 1970 — were the most talented high school team he had the opportunity to coach in Salisbury.

“Robert Pulliam, Justus Everett, Kenny Holt, Roger Jackson, Aubrey Childers and Dennis Brisson were all in that same class with Ellis,” Stout said. “We had just an untold number of great athletes in that group.”

Pulliam would make his mark at Tennessee and Everett at N.C. State. Alexander, who joined Stout, Pulliam and Everett in the Salisbury-Rowan Sports Hall of Fame last August, would shine in an unexpected way at the University of North Carolina.

Alexander was an outstanding high school player as a hard-hitting linebacker. He was All-South Piedmont Conference as a junior and senior. His senior year he also received the Golden Helmet Award, which goes to the team’s  most spirited player.

“We had enough good players to two-platoon, and Ellis was just a great linebacker,” Stout said. “He also kicked the extra points and field goals for us, although we tried not to give him many chances to kick field goals. We wanted touchdowns.”

Stout’s 1970 team went undefeated (with two ties) in the regular season, before clobbering Lexington and winning a showdown with East Rowan in the Piedmont playoffs of the old Western North Carolina High School Activities Association. Alexander’s final football game was a devastating 13-7  loss in the WNCHSAA title game to Shelby.

Alexander experienced serious track and field success as a senior. Stout encouraged all his football players to participate on his championship track teams, and those football athletes put together a long string of success in the mile relay.

There may have been swifter guys than Alexander, but few matched him for heart and endurance.

Alexander, the student body president, was recruited by a lot of schools and he’d been offered a full football ride by N.C. State, among others.

UNC had informed Alexander it didn’t have an athletic scholarship for him, but he’d been nominated for a Morehead academic scholarship, and so he waited. UNC was the only place he wanted to go, and his patience was rewarded. He was a Morehead winner in the spring and headed to Chapel Hill in the fall of 1971, eager to earn a degree and to play football for the Tar Heels.

His last official days as a linebacker came on the UNC freshmen team, but he kicked three field goals against N.C. State’s freshmen, and his future as a kicking specialist begin to take shape.

One of the last “straight-on” kickers in the ACC, Alexander never stopped being a linebacker at heart. When he kicked off, he didn’t retreat to the rear as the last line of defense. Instead, he lowered his helmet and sprinted down the field — with coach Bill Dooley’s blessing — as a wedge-buster.

From 1972-74, Alexander was a letter-winning varsity kicker for the Tar Heels. He was the team’s leading scorer in 1972 and 1973, accounting for 15 field goals and 59 PATs in those two seasons. The 53-yard field goal he kicked against N.C. State in 1973 stood as a school record for a dozen years and is still one of the five longest kicks in school history. His 94 career PATS  still rank in the top 10 all-time at UNC and his 148 total points rank in the top 25.

The 1972 season was especially fun. That UNC team was 11-1 and won the ACC championship. Alexander started the scoring with a field goal as the Tar Heels capped the season with a victory in the Sun Bowl.

His senior season was his most challenging, as he developed congenital glaucoma in his left eye. His vision was deteriorating.

Alexander kept hitting people, too, every chance he got. He kept covering kickoffs rather than retreating to watch the action.

In October of that season, Alexander received a jarring blow and lost his mouthpiece. It wasn’t the Morehead Scholar’s smartest move ever, but he didn’t have it replaced.

He paid for that decision when the annual donnybrook with Duke, Alexander’s swan song at Kenan Stadium, rolled around. He had a huge collision with a Duke player on a kickoff and lost half a tooth. That was a reminder why it’s a good idea to wear a mouthpiece.

He stood on the sideline in pain for much of that game, but when the Tar Heels drove to tie at 13 in the final minutes, Alexander was summoned by Dooley to kick the go-ahead PAT.

Alexander’s tooth hurt like the devil, his vision was fading, and his heart was pounding, but his kick, as always, was straight on.

The football actually came to rest in the UNC logo in the end zone, landing squarely in the middle of the “N.” The ball hadn’t sailed far, but it couldn’t have flown straighter. It was the last of Alexander’s many PATs at Kenan, and it proved to be a game-winner.

Alexander didn’t think about himself after one of the more memorable kicks of his career. Instead, he waved at Dr. Hedgpath in the stands. He’d made it possible.

The damaged tooth led to a root canal, but his mouth recovered nicely.

Alexander, who died at 64, spent most of his working life as a businessman in Atlanta.

His health failing, he wasn’t able to physically appear for his Hall of Fame induction last summer, but his older brother, Jake, who taught him how to kick, was there to represent him, and his former coaches and teammates filled a long table to honor him.

Jake called Ellis on his smart phone during the induction, using the FaceTime app, so in a way, Ellis was there.

“We’ve lost a lot of those guys from Ellis’ class,” Stout said. “There were really special people in that class, and he was as good as all of them.”