CNN’s Wolf Blitzer gets real with HPU grads: ‘Show up, be curious and work hard’ 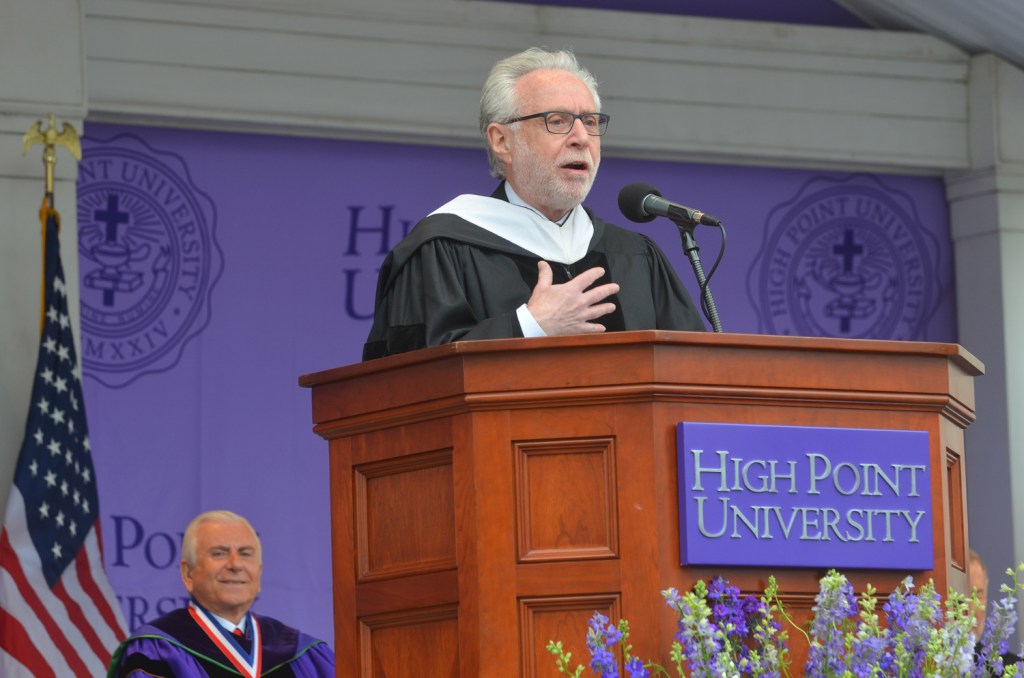 HIGH POINT — Wolf Blitzer told the 1,000 graduates at High Point University last Saturday that before he became an Emmy Award-winning journalist and CNN news anchor, he had to learn to show up, be curious and work hard.

Blitzer, who said he began his journalism career as a “young man sheepishly introducing myself” at Reuters News Agency in Tel Aviv, Israel, also told the 10,000 people in attendance that the first major assignment he turned in to an editor drew heavy criticism.

“I thought, maybe journalism wasn’t for me,” Blitzer said. “Maybe I made a mistake. Maybe I should consider quitting. But you know what? The next morning I showed up for work and the next day and the next days after that. I didn’t give up.”

“It stuck with me throughout all of my experiences and I’m glad it did. I’ve been showing up for work every day since then. And life as you will learn, graduates, is about showing up day after day, week after week. People notice when you show up, when you put your head down, when you work hard. You won’t always succeed. You won’t always be the best. But nothing in life comes easy. So show up, be on time and be ready to work.”

His early experience learning from tough editors and veteran journalists, covering news in the Middle East and then joining CNN in the 1990s as a military affairs correspondent, gave him the kind of grit he encouraged graduates to have. And while the world will always experience turmoil, Blitzer told graduates and their families that they all play a vital role in moving it forward.

“We take our responsibility as journalists very seriously, and we do it because we want to make sure people like you are ready to take the mantle and lead our country,” Blitzer said. “I mean that quite seriously. People like you, Class of 2017. Among you may sit future leaders, maybe presidents, maybe members of Congress, school board members, city council chairs. Our democracy will not survive without you being very much involved and we won’t be our best without you showing up, working hard, practicing your craft and treating everyone fairly and with kindness.”

The university bestowed an honorary doctorate of human letters to David Cottrell, parent of graduate Leah Cottrell and CEO of RetailData, an international company that employees more than 2,300 people.

Graduates also received a Senior Send-Off from Qubein, who encouraged them to live lives of both success and significance.

“Graduates, you are the light of the room,” he said. “Shine so this universe will become better because you exist. Let your light shine the pathways and the highways of all you meet. Plant seeds of greatness in their minds, hearts and souls. Don’t be just a light that lights up the room — carry it down the hallway. Light the world so much that your impact and your influence can be felt for a long time.”