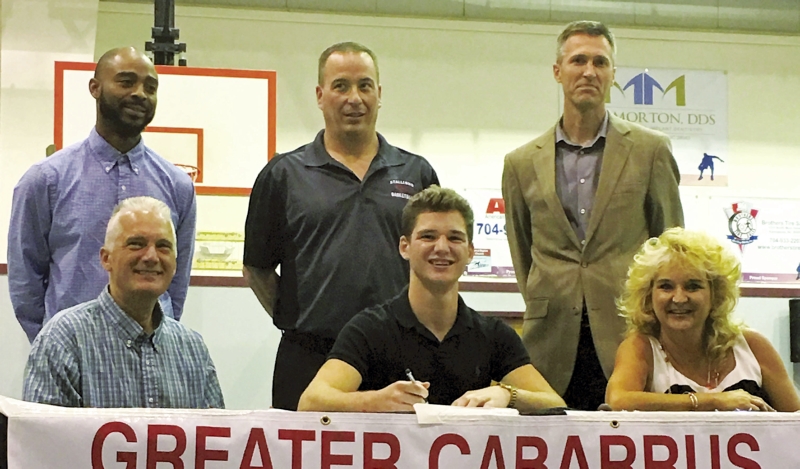 Submitted photo Bradin Lilly (front, center) recently announced that he would continue his education and basketball career at Belmont Abbey.

SALISBURY — Bradin Lilly, of Salisbury, announced recently that he will continue his education and basketball career at Belmont Abbey.

Lilly was home-schooled by parents Bill and Melissa Lilly and played in the Rowan-Cabarrus Stallions’ basketball program for nine years.

Lilly, a shooting guard, was captain of the Stallions for three of his four high school years, two of which saw regional championships. He earned all-tournament honors four times.

Lilly had three different coaches during his career with the Stallions — Jerry Riley, Brian Maderia and Eddie Ward.

“Bradin always gives 100 percent and works as hard if not harder than anyone on the team,” said Maderia. “This accomplishment is a testament to his hard work and character.”

Riley added: “Belmont Abbey is getting a great shooter, a great athlete and a great young man. Bradin shows great character, leadership and a work ethic that any coach would want on their team.”

During the past two years, Lilly played AAU basketball for the Rowan Hurricanes, coached by Marcus White.

“Bradin is a sharpshooter and Belmont is getting a very good player,” said White.

Lilly, who trained in the Vertimax performance program in Mooresville, said that Belmont Abbey felt right for him.

“I feel like Belmont Abbey will give me a well-rounded experience in education, faith and, of course, basketball.”