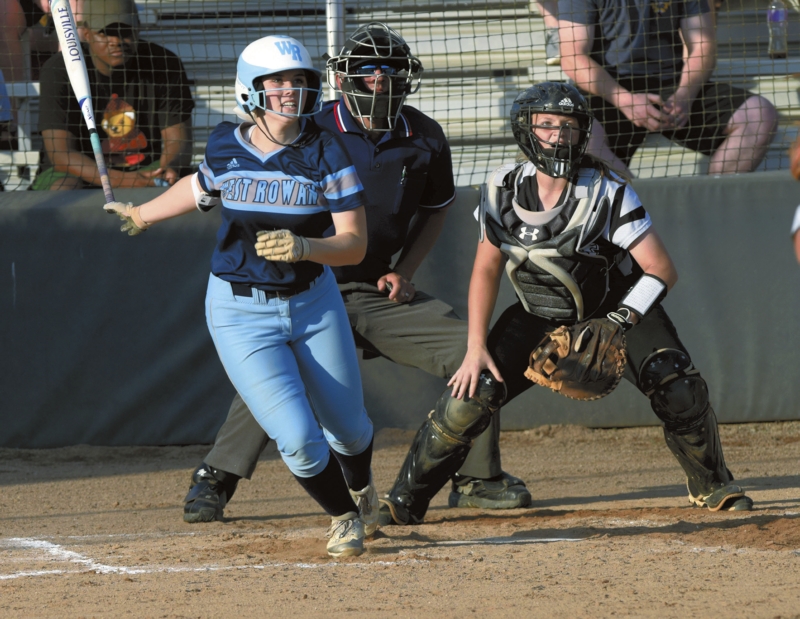 Wayne Hinshaw/for the Salisbury Post ... West Rowan’s Parker Greene watches one of her three hits fall in the outfield, during Wednesday’s state 3A playoff softball game against North Buncombe.

MOUNT ULLA — West Rowan and North Buncombe combined for 28 hits  in a playoff softball game on Wednesday, so maybe it was inevitable that the game would end on a rocket.

North Buncombe’s sophomore pitcher Cailtin Griffin smothered Morgan Corriher’s smash up the middle for the final out in the bottom of the eighth inning, and the Black Hawks held on for a 10-8 3A first round win.

“A lot of the time, that’s what we do,” Corriher said with a sigh. “We hit it hard right at people.”

Seventeenth-seeded North Buncombe (13-7) made a three-hour bus ride to play the 14th-seeded Falcons but looked like the livelier team for a long time. North Buncombe dominated the first three innings and built a 5-0 lead that would’ve been 6-0 if West center fielder Hannah Pratt hadn’t thrown a strike to the plate to cut down a runner in the third.

The Black Hawks, who compete in a tough 3A/4A split league in the Asheville area, did make it 6-0 in the top of the fourth when a diving catch by West left fielder Ava Link transformed a double into a sacrifice fly. That catch finally gave the Falcons (13-7) a spark, and they got two runs back in the bottom of the inning when Corriher lined a hit to right to score Mary Sobataka and Parker Greene.

“The first three innings their pitcher was throwing riseballs and we were going after them,” Corriher said. “When we started laying off the riseballs, we started getting hits.”

Kennedy Hensley cleared Pratt’s outstretched glove for a homer leading off the fifth against West pitcher Hannah Roberts and gave the visitors a 7-2 lead.

Greene fouled off a series of pitches before driving a double to right-center to score Alexandra Linder in the bottom of the inning, and the Falcons were down 7-3.

Still, it appeared that North Buncombe was going to win easily. The Black Hawks maintained that 7-3 lead into the bottom of the seventh, but West wouldn’t end the season quietly.

“I can’t tell you how proud I am of the rally we put together,” West coach Jimmy Greene said. “We finally hit it hard late in the game, but it always seems to take us a while to get the bats going and the thing about the playoffs is you can’t wait six innings to start hitting. You just can’t do it.”

With one out in the seventh, Linder tomahawked a pitch up around her helmet for a bloop single to start the improbable comeback. Sobataka’s solid hit gave the Falcons two baserunners. Greene then lined a ball very hard.  It appeared it would be caught, but the ball had some slice toward the line off the lefty’s bat, it screamed past the lunging  left fielder, and suddenly Falcons were sprinting around the bases. Two runs scored, with Greene stopping at third, and West was down 7-5.

“We’ve got a great outfield, normally, but that’s a freshman out there and there are going to be some jitters in the seventh inning of a playoff game,” NB coach Tiffani Ferguson said.

When Corriher launched a double toward the fence in left-center, it was 7-6. Link lined out for the second out, a wicked shot right at the second baseman, and it was up to Pratt. Her bouncing single scored pinch-runner Tori Hester from second base, and the Falcons had tied it.

“Well, when you’ve been around teenage girls, you know they can start thinking they’ve got it and they let up,” Ferguson said. “We made some mistakes and they tied it up. But the important thing was the girls knew what they had to do to get the game back, and they went back to work in the eighth inning. They stepped it up again.They represented Weaverville well.”

An error and an infield hit that West should’ve gotten an out on put two on with no outs, and a well-executed bunt moved both runners. Taylor Laster hadn’t had a hit yet, but she poked the two-run single to right that proved to be the game-decider. A run-scoring single by Laura Allen — she also had been hitless — pushed NB’s lead to 10-7.

“We’ve got a really young team and we knew this would be an evenly matched game,” Ferguson said. “But we never doubted we could do it.”
West tried to rally again, using two defensive mistakes and a hit by Linder to loaded the bases for its big hitters with one out. Greene had a chance to do some damage, but she’s best driving pitches away from her, and Griffin got a pitch in on her hands. She pulled a grounder to the first baseman. A run scored, but West was down to its final out. And that’s when Corriher hit the ball right back to Griffin to end the game.

“Their pitcher was getting tired at the end and was slowing down a little,” said Greene, who logged her 100th career hit in the fourth inning. “But she made a good pitch to me in the eighth.”

Coaches and players pointed to errors as the main reason a West team that has only two seniors made a first-round exit from the playoffs.

“We showed our immaturity a little bit on defense,” Parker Greene said.

“Our defense just wasn’t there tonight,” Corriher agreed. “But we still had a good year. Coming into this season, we were definitely underdogs.”

West’s season peaked when the Falcons were 13-3 at Easter. They dropped their last four outings, although two were to the SPC’s top pair — Hickory Ridge and Cox Mill.

“We had a year no one expected from us,” Parker Greene said. “And we’ve got a lot of young girls coming back.”

North Buncombe will play at Hickory Ridge in the second round.