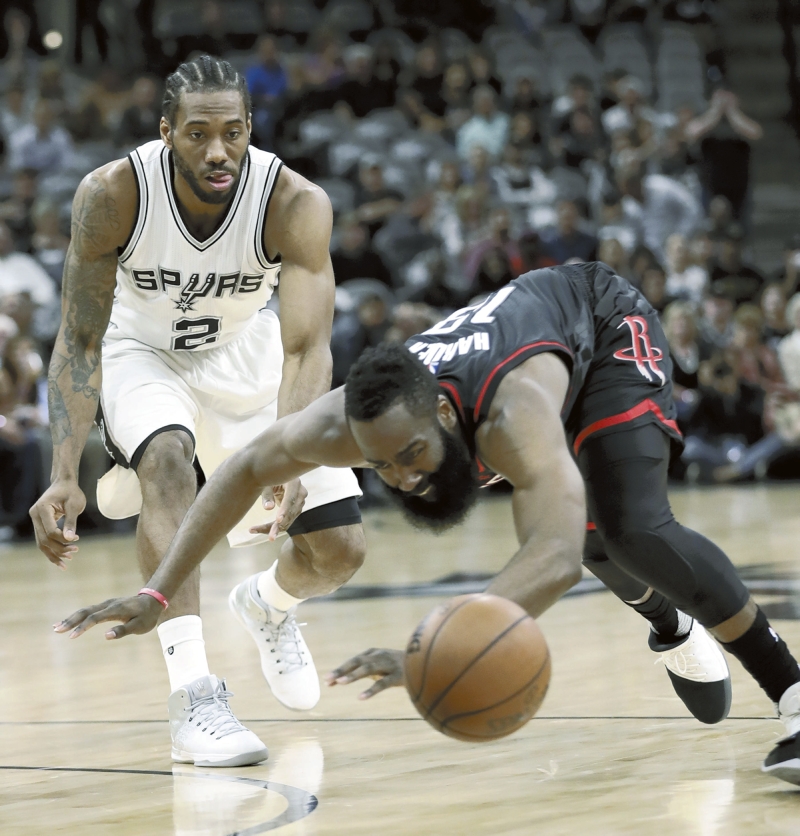 San Antonio Spurs' Kawhi Leonard (2) and Houston Rockets' James Harden (13) scramble on the floor for the ball during the first half of Game 5 in a second-round NBA basketball playoff series, Tuesday, May 9, 2017, in San Antonio. (AP Photo/Eric Gay)

SAN ANTONIO (AP) — Danny Green scored seven of his 16 points in overtime, and the San Antonio Spurs overcame an injury to Kawhi Leonard to beat James Harden and the Houston Rockets 110-107 on Tuesday night to take a 3-2 lead in their second-playoff series.

Leonard had 22 points and 15 rebounds in 38 minutes before exiting with an injured right ankle. Leonard stepped on Harden’s foot with 5:37 left in the third quarter and then played limited minutes before sitting out overtime.

Harden had 33 points, 10 rebounds and 10 assists. He had a chance at potential tying 3-pointer in the final seconds of OT, but was blocked from behind by Manu Ginobili.

Game 6 is Thursday in Houston.

Each team stalled at the start of the extra period. Patrick Beverley made a 3-pointer with 2 minutes remaining for the first points of the period, giving Houston a 104-101 lead.

Green made a go-ahead 3-pointer and converted a three-point play to make it 109-107 Spurs with 30.1 seconds left. He also made a foul shot down the stretch to help San Antonio hold on.

Two questionable plays closed regulation with the game tied at 101.

Harden was whistled for a charge after dribbling all but a few seconds off the shot clock before driving to the basket on Jonathon Simmons. The Spurs failed to take a shot on their final possession, with Patty Mills banking in a 3-pointer after the buzzer sounded.

Harden also played solid defense, helping hold Leonard and LaMarcus Aldridge to 15-for-42 shooting as he rotated assignments in Houston’s smaller lineup. But he finished with nine turnovers.

With the Rockets leading 82-81, officials ruled a ball out of bounds on the Spurs that replays showed was actually off Harden. Beverley drained a 3-pointer on the ensuing possession, prompting San Antonio coach Gregg Popovich to scream and point at official Derrick Stafford.

The play ignited what had been a rather listless San Antonio, leading to a 10-2 run bridging the third and fourth quarters for a 92-87 lead.

The Spurs tried to exploit a size advantage over the Rockets’ small lineup early, especially when Harden was guarding either Aldridge and Pau Gasol. The Spurs’ big men only managed 2-for-5 shooting in the opening three minutes, leading San Antonio to abandon the strategy midway through the first quarter and sub Simmons for Gasol.

Simmons responded by scoring 10 points on 5-for-13 shooting in 26 minutes.

Rockets: Houston has lost four straight best-of-seven series when it was tied 2-2. The last time the Rockets won a series after being tied 2-2 was in the 1995 Western Conference finals when they beat the Spurs. . Nene is out for the remainder of the postseason after tearing his left adductor in Game 4.

Spurs: Ginobili has 313 3-pointers in his postseason career, which is third in league history behind Ray Allen (385) and Reggie Miller (320). . Ginobili drove the lane for a one-handed dunk with 2 minutes left in the first half.