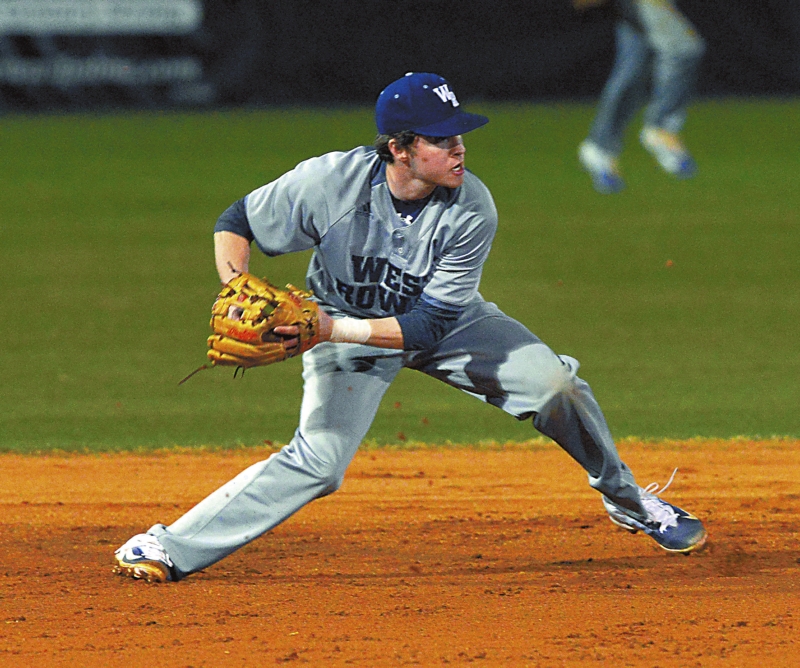 Wayne Hinshaw/for the Salisbury Post ... West Rowan shortstop Brett Graham fields a ground ball during a game this season at Salisbury. Graham has announced that he will continue his education and baseball career at Belmont Abbey College.

But Graham has an unusual third hobby. He likes to read books.

The infielder/pitcher/scholar is headed to Belmont Abbey College, where he’ll be an asset in the classroom as well as on the field for the Division II Crusaders.

“I’m going to major in biology,” Graham said. “My career goal is to become a physician’s assistant.”

Graham, who bats left-handed and throws right-handed, contributed to West Rowan’s 2015 South Piedmont Conference championship as a sophomore. He’s been an integral part of the last two titles as West (19-6) has put together the first  conference three-peat in school history.

“Three championships in a row in the South Piedmont Conference is something to be proud of and speaks volumes for our players,” Coach Seth Graham said. “This is a great area for baseball and we play in a really tough league.”

“That’s the most  guys we’ve ever had at one time, and that says a lot about how successful this group has been,” Coach Graham said. “These guys have done the job not just during the spring season, but in fall baseball and winter workouts. And in the summer, they’re always on a baseball field somewhere.”

Brett Graham’s summer of 2016 was an especially long and memorable one. The Rowan County American Legion team played 54 games and finished as national runner-up. A utility player, Graham helped out on the mound, second base and shortstop. He scored 15 runs and he pitched in nine games. He saved a 9-7 win against Davidson County.

Graham  probably will end up doing most of his work for Belmont Abbey on the mound, although he’s also going to get a chance to prove he can hit get on base often enough to be in the lineup at second base or shortstop.

Graham has been outstanding in a relief role for the Falcons as a senior. He’s struck out 33 in 22 1/3 innings and opposing batters are batting .198 against him.

“We really would like to have pitched Brett more, but he’s our best shortstop,” Coach Graham said. “He’s an athletic player, a good lefty stick.”

Offensively, Graham hasn’t been a high batting average guy, but the object of the game is to score runs, and he does that really well because he is such a patient hitter and walks so much. “Grinding at-bats” is the catch-phrase coaches use these days, and Graham definitely grinds. Even if he strikes out, it’s not going to be a routine at-bat for the opposing hurler, and he’s going to have to throw a lot of pitches.

Graham walked a team-high 22 times as a junior, patience which turned his modest .222 batting average into a robust .402 on-base percentage. He scored 24 runs, one behind team leader Kacey Otto.

Graham’s senior season has been a repeat. He’s been an ideal table-setter at the top of the lineup.  While his batting average entering Wednesday’s state playoff game was just .208, 22 bases on balls, twice as many as anyone else on the team, have led to a .419 on-base percentage and a team-high 25 runs scored. Austin Love is second on the Falcons with 16 runs.

Good grades and a good eye have given him a chance to continue his career in college.