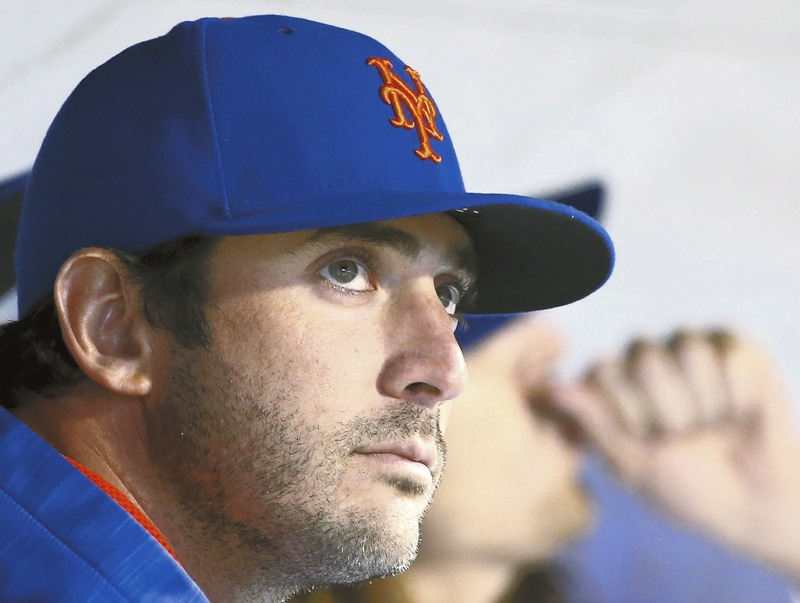 Nothing like the brash and cocksure kid who burst onto the New York scene a few years back and quickly became one of baseball’s most dominant pitchers.

A subdued Harvey rejoined the Mets on Tuesday and apologized to teammates, coaches, owners and fans after serving his three-day suspension for skipping a game last weekend following a late night on the town. And in a pair of unusually emotive news conferences, he and manager Terry Collins even hinted the one-time ace might have a problem with alcohol.

At the very least, they virtually acknowledged a late-night lifestyle has pulled Harvey’s priorities away from the game and impaired his pitching.

“There are things that I’ve realized in the last couple days that I need to be doing or should not be doing,” Harvey said before New York hosted San Francisco. “One of those that I should be doing is putting myself in a better place to perform physically and be accountable for my work, and that’s something that I’m committing to.”

Collins said he thinks this latest flap can be a wakeup call , and Harvey admitted that.

Before the 2015 playoffs, Harvey was fined for missing a mandatory team workout. This time, he was suspended three days without pay.

“I’m extremely embarrassed by my actions,” said Harvey, wearing a Mets cap and practice shirt as he sat at a table with a microphone in the interview room.

“It’s completely my fault,” he added. “I’m doing everything I can so that never happens again.”

The star pitcher has help inside and outside the clubhouse, Collins said, and he thinks Harvey will now use his strong support group.

“I don’t think he thinks he has to do it by himself anymore,” Collins said.

Asked directly if he thinks Harvey has an alcohol problem, Collins said: “I’m not qualified to answer that.”

And his habits off the field?

“I didn’t get into that stuff with him. I know that there’s people who have, that he’s discussed it with. They’re professionals on that side of it,” Collins said. “I think he needs to just refocus his energies towards being the best in the game again.”

Harvey acknowledged he was out after Friday night’s game “past curfew” and then played golf Saturday morning. He did not show up at Citi Field for Saturday night’s game against Miami and took “full blame” for that.

The right-hander was scheduled to start Sunday afternoon, but when he arrived at the ballpark he was sent home by the team. New York called up journeyman Adam Wilk from Triple-A Las Vegas to fill in on short notice and little-to-no sleep. Wilk was hit hard in a 7-0 loss to the Marlins.

“I think everybody deserves a second chance. What Matt said to me, he’s going to get after it like he did in the past,” Collins said. “I told him he needs to make baseball number one. When he did that, he was on top of the world, you know? This guy was the best pitcher in the game. He made that the priority. And when he makes that the priority again, he’ll be back.”

Harvey’s career was interrupted by Tommy John surgery in 2013. He had a rib removed last year during an operation to treat thoracic outlet syndrome, cutting short a dreadful season on the mound.

This year, the 28-year-old Harvey is 2-2 with a 5.14 ERA in six starts covering 35 innings. He is coming off two of the worst outings of his career, allowing 12 runs over 9 2/3 innings with eight walks in a pair of losses to Atlanta.

The suspension, effective Saturday through Monday, cost Harvey $84,016 of his $5,125,000 salary. And it was the latest embarrassing fiasco for the injury-depleted Mets during a tumultuous week and a half.

Harvey did not address media reports over the past several days that indicated he at least tried to inform pitching coach Dan Warthen he wasn’t feeling well Saturday and wouldn’t be at the ballpark — or whether the Mets sent security staffers to check on him at his Manhattan apartment.

The pitcher said he hasn’t asked the players’ association to file a grievance to contest the suspension, but he didn’t rule out the possibility of doing so in the future. Baseball’s labor contract says any punishment must be for “just cause.”

“Honestly, the last thing in the last three days I’ve thought about is that. For me it’s, I’ve been more embarrassed for my actions and I’ve been thinking about the team more than anything,” he said.

“I certainly have felt terrible the last couple days from what I have put myself through and what I’ve put this organization through and the last thing I ever want to do is do that again,” he added.

After missing a turn in the rotation, Harvey is scheduled to make his next start at Milwaukee on Friday night when the Mets begin a six-game trip.

Harvey addressed teammates from his locker in the clubhouse Tuesday afternoon, outfielder Curtis Granderson said. Granderson and Jay Bruce both said they accepted Harvey’s apology and thought it felt genuine and sincere.

“It looked like he was definitely speaking from the heart,” Granderson said.

“He’s ready to get back to work,” Bruce said, adding that he appreciated Harvey’s honesty. “There’s no grudges. There’s no lasting effects. We have to move on.”

Of course, Harvey also apologized after arriving late to the ballpark for that workout before the 2015 postseason and said it wouldn’t happen again.

“I’ve made another mistake,” he said Tuesday. “I understand everybody’s anger, the organization doing what they did — I completely understand. It’s me who takes full blame for that. It’s me who needs to fix it and move forward and like I said, make sure it never happens again.”

Collins choked up when describing a text message Harvey received from former teammate Bartolo Colon, now with the Atlanta Braves.

“He needs to take it as pretty special,” Collins said. “Nobody likes to be embarrassed. And that’s kind of where he’s at right now, more than anything. So we’re going to fix that. We’re going to help fix that.”

Prep Golf: Chavis ties for 2nd in 3A; Antosek…