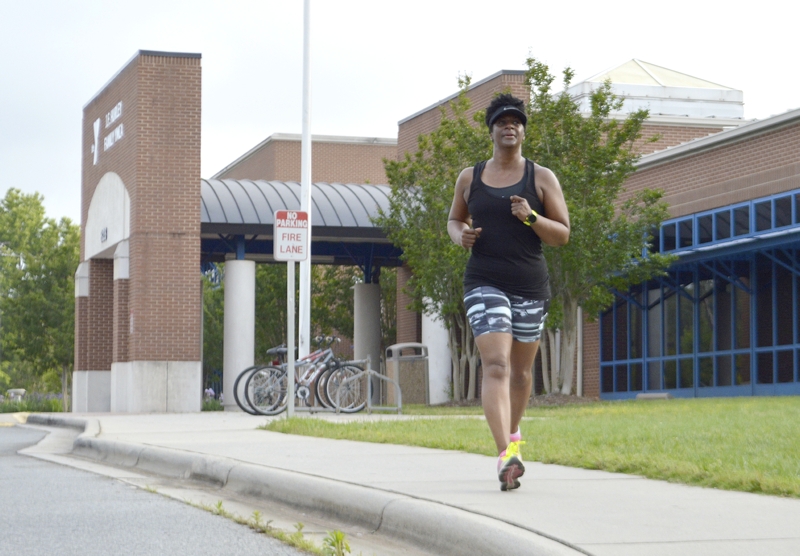 Emily Ford/For the Salisbury Post Cathy Scott begins her run. Scott will join more than 100 others at the TWAM 5K Run & Walk on Friday night to help raise money for First Presbyterian Church's mission trip to Mexico this summer.

SALISBURY — Cathy Scott was in her late 40s when she tried running for the first time.

“How do people enjoy this?” she remembers asking Richard Taylor, who set the pace for her beginner’s running class.

Taylor told Scott to give it six months and see how she felt, but not to quit before she had given running a chance.

Four years after completing the running class sponsored by Salisbury Rowan Runners, Scott runs about 20 miles a week. Friday night, she will join more than 100 others in downtown Salisbury for the TWAM Mission 5K Run & Walk, a fundraiser for First Presbyterian Church’s Teens With a Mission trip to Mexico this summer to build homes.

The TWAM run starts at 7:30 p.m. with the Half-Mile Super Hero Fun Run and continues at 8 p.m. with the 5K Run & Walk. Both races start and end at First Presbyterian Church on Fisher Street.

Fun Run participants are encouraged to wear their favorite superhero or character costume. The Fun Run costs $10, and the 5K costs $20 (or $25 for those who register after Thursday). All participants will receive a T-shirt.

Early registration is offered through Thursday online at www.sportoften.com. Race-day registration starts at 6 p.m. Friday. All participants are entered to win more than a dozen door prizes from local businesses, including gift cards, gift baskets and running gear.

The fastest runners in a variety of categories will win awards shaped like hammers, a reminder that the race supports building homes for the needy.

It’s the 12th year for the TWAM 5K race and the seventh year on the certified course through historic downtown Salisbury. The course is designed to appeal to walkers, joggers, casual runners, competitive runners and elite runners, offering something for each level of fitness.

This will be Scott’s third TWAM 5K.

“It’s a good race, a well-supported race, with great volunteers,” she said. “And it’s a good cause. Anytime you can find teenagers willing to work in ministry, it’s always a good thing to support them.”

Scott ran her first 5K in 2013, part of the running class. Running became like therapy for her — a time to be outside, alone with her thoughts. She ran in more 5Ks, then worked her way up to half-marathons and triathlons.

In March, she completed her first marathon, the All-American in Fayetteville.

“One of the things that really gives me motivation is when people tell me that I inspire them,” she said. “I’m not a fast runner; I’m more of an endurance runner. And people see me running on the road and doing triathlons. Even my son, he says I’m his hero because I’m doing things that even people his age aren’t doing.”

Son Bradley Reid and husband Gerald Scott support and encourage her, said Scott, who also teaches a spin class at the J.F. Hurley YMCA at 5:15 p.m. Monday and Wednesday. She runs three days a week and is usually on the road by 6 a.m. to put in her miles before work.

“It’s great exercise, and you don’t need to spend a lot of money,” Scott said. “I’m not an elite runner. I’m just an ordinary person who decided to try running one day.