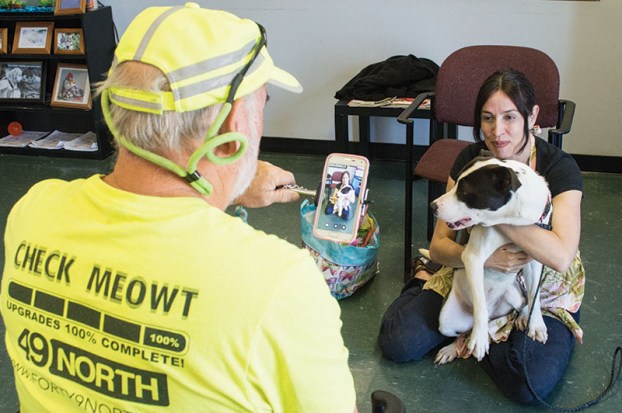 Janelle "Ella" Gingrich-Caudle holds a dog and speaks to a camera while volunteering at the Rowan County Animal Shelter. Gincrich-Caudle regularly volunteers at the shelter by posting interactive videos with shelter animals. Josh Bergeron / Salisbury Post

Want to adopt a pet?

What: 80 percent off adoption fees

Animals who wind up in the Rowan County Animal Shelter will find they have dedicated advocates among the  people who volunteer at the facility, and that has made all the difference.

There was a time when the people who ran the shelter seemed to regard volunteers as meddlers who wasted staff time and did more harm than good. The skeptics were not limited to  Rowan, either. A task force studying animal control here received letters from people running other shelters that questioned volunteer scheduling and supervision. The letters also cited the potential for volunteers to lodge allegations of misconduct.

That jibes with the prickly relationship the Rowan shelter had with some who wanted to help the animals a few years ago. Fortunately, people running the shelter now see more positives than negatives in welcoming volunteers. According to Bob Pendergrass, animal services director, volunteers have improved the shelter. “These people are here because they care about animals,” Pendergrass said recently, “but they are really serving the community.”

Indeed they are. As of mid-December 2016, the Animal Shelter had handled 1,713 cat adoptions and 1,477 dog adoptions for the year. Many of those adoptions were brought about by volunteers’ active use of social media to show photos and videos of the animals. Some use their own Facebook pages; there’s also a page for Friends of the Rowan County Shelter Animals. Still other volunteers help out with tasks at the shelter. Meanwhile, volunteers behind the nonprofit Rowan Shelter Guardians work to get resources for the animals’ material and medical needs.

No shelter is perfect, but volunteers have played a key role in making conditions better — and more temporary — for animals at the Rowan County Animal Shelter. “We have things written about us on Facebook that are not exactly positive, but people can’t find out the truth until they come see for themselves,” Pendergrass said. “… I have yet to see one that didn’t walk away saying ‘this is different than I thought it was.’ ”

If you ever wondered what downtown sidewalks would look like without trees, take a look at the 100 block of... read more