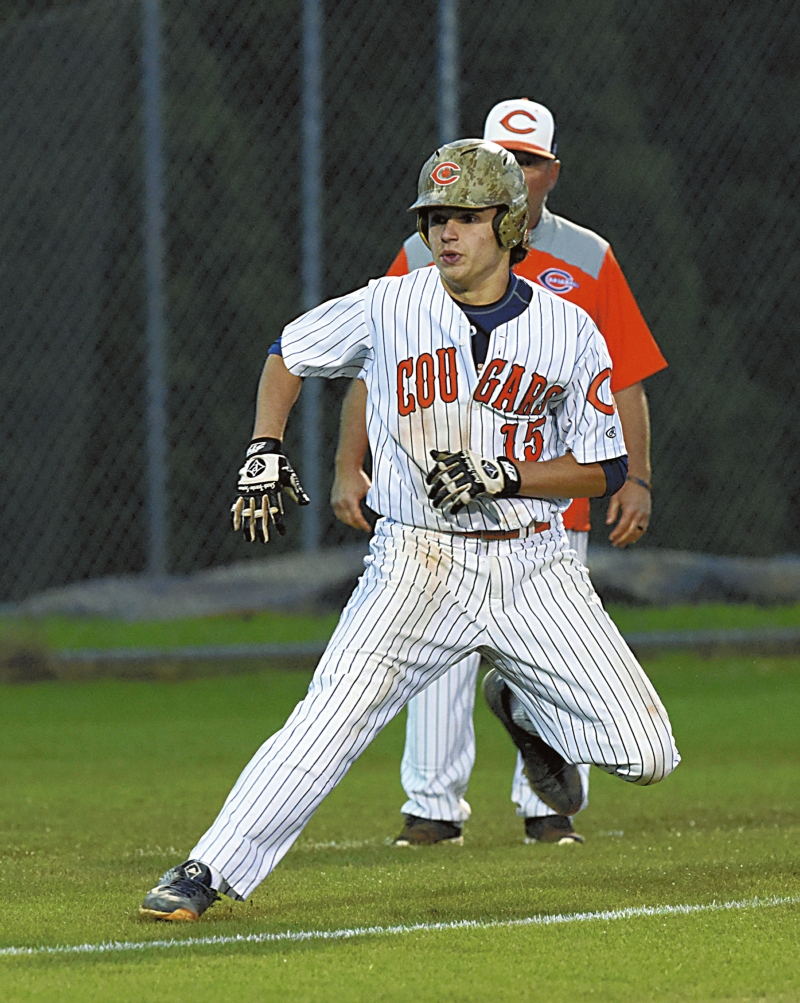 CHINA GROVE – An old baseball adage declares that hitting is contagious. The Carson Cougars may now be part of the epidemic and it comes just in time for the state 3A high school baseball playoffs.

The Cougars (20-7) racked up 13 hits, posted seven runs in the second inning alone, and cruised to an 11-1 win over Waynesville Tuscola Wednesday night in a first-round playoff romp. The game ended by the mercy rule in the sixth when Carson plated three runs without making an out.

“In the last two weeks of the season going into the conference tournament,” Carson head coach Chris Cauble noted, “something just started clicking for us at the plate. I just hope it keeps on clicking.”

Carson has been a rock-solid pitching and defensive team all spring but midway through the season, its team batting average hovered around the .250 mark.  But the Cougars have now racked up six straight wins with double-digit hits as they head into round two of the 3A Western playoffs.

“We really just came alive at the plate all of a sudden,” said slugging outfielder Luke Barringer, who contributed his second homer of the season against Tuscola. “It was a fastball, kind of high, and I really hit it high in the air. I thought it was going foul but it had just enough to go out.”

The two-run shot by Barringer was the cherry on top of the seven-run second inning, when Carson sent 11 men to the plate. The eight-hit outburst included the homer, a hustle double by Clayton Gilmore and five consecutive singles off Mountaineer lefty starter Nick Worrell. That gave the Cougars an 8-0 lead, which was more than enough for their ace Owen White to improve his record to 8-1.

“I was hitting my spots well and I felt good,” White said after four shutout innings that dropped his season ERA to a minuscule 0.30. “But when we jumped on them early, that really helped and I settled down. It always helps a pitcher out when he’s got comfort.”

The Mountaineers (10-9) made the long trek down from Waynesville and didn’t help themselves when they committed four errors, including throwing miscues in the decisive second inning.

“We hit it a little bit tonight,” said first-year Tuscola coach Bergen Tatham, “but we couldn’t put anything together back-to-back. Then we made a few mistakes that hurt us badly.” But Tatham was proud of his team’s effort as they posted their first winning record in several seasons.

Tuscola was unable to mount any threats against White and reliever Maddux Holshouser. But in the sixth, Tuscola pieced together a pair of two-out singles by Jack Sutton and Patrick Broom off Devin Gay to make the score 8-1. It was the first run Cougar pitching had allowed in some 30 innings, including three shutouts in winning the South Piedmont Conference Tournament last week.

Carson responded to the Mountaineers’ run in the bottom of the sixth with singles by Daniel Leonard and Logan Ridenhour. White then crushed a pitch off reliever Kyle Creary to deep center for a two-run triple. “I finally stayed back on one and gave it a good ride,” said White, as he posted a 3-for-4 night at the plate with two RBI.

Ridenhour and Gilmore added two hits each to the Carson attack as seven batters contributed to the suddenly potent offense.

Carson now advances the second round and will travel to Boiling Springs Saturday night to face the Crest Chargers (16-6), the 7th seed out of the South Mountain Athletic conference. The Chargers rolled past Southwest Randolph 12-2 Tuesday night with a trio of home runs.

“We are ready for round two,” Cauble said. “We will give it our best shot. Our kids are starting to believe in themselves a little bit and that means a lot.”

Cam Prugh (2-2) will likely get the start for Carson but with White throwing less than 55 pitches last night, he is available for relief work if needed. The Cougars actually have their entire pitching staff available to work in round two and hopefully beyond. “We are taking a ‘one game at a time’ attitude going forward,” Cauble added.