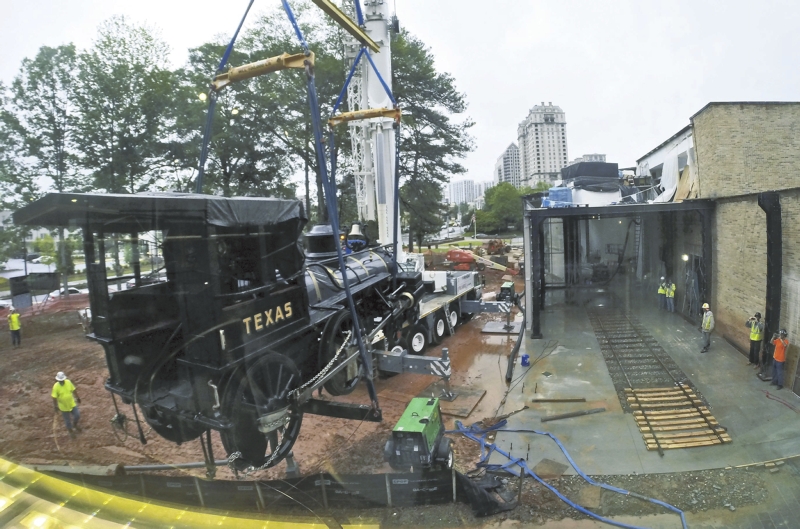 The 26-ton Texas, the famed engine from the 1862 Great Locomotive Chase during the Civil War, arrives at the Atlanta History Center in Atlanta on May 4. The Texas returned to the Atlanta History Center after a trip to the North Carolina Transportation Museum for refurbishing. The Texas will go on exhibit in September in Atlanta. Bob Andres/Atlanta Journal-Constitution via AP

ATLANTA (AP) — The 26-ton Texas, the famed engine that took part in the 1862 Great Locomotive Chase, has made its way back to Georgia.

It was recently carried ceremoniously on the back of a lowboy truck to the semicircular driveway in front of the Atlanta History Center.

Then, saluted by applause from a rain-soaked but hardy audience, it was lifted by a 110-ton crane to a perch on the History Center campus, where it will be displayed inside a glass-fronted building.

The Texas, and its 19-foot tender, will go on exhibit in September and will be visible from West Paces Ferry Road — even at night.

Since late 2015, the two have been at the North Carolina Transportation Museum in Spencer, North Carolina, getting a $500,000 overhaul. The Texas received a new cow-catcher, boiler jacket, smokestack and paint job, and the tender was also spruced up, with the replacement of rotted beams in its wooden frame.

“We are thrilled,” said Jackson McQuigg, vice president of properties at the History Center and the “resident train guy.”

In the past, McQuigg has worked at renovating historic locomotives at the N.C. Transportation Museum.

McQuigg said Atlanta, originally the Southern terminus of the Western & Atlantic Railroad, exists because of the railroad. It is therefore appropriate to use the Texas as a focal point to tell the story of Atlanta.

“It’s terrific,” he said. “This is Atlanta’s creation story. The first city seal featured a locomotive that was the same type as the Texas.”

The Texas was displayed for almost a century in the basement of the Cyclorama building in Atlanta’s Grant Park. In 2014, its owner, the city of Atlanta, decided to the put the train and its accompanying 365-foot cycloramic painting, “The Battle of Atlanta,” in the care of the History Center.

The Buckhead facility raised $32 million to build a home for the painting and the locomotive and set about preparing both for the big move.

While conservation on the painting won’t be completed until the fall of 2018, the work on the Texas was also extensive.

Many parts were rusted. There was debris left inside the smoke-box from 1927, when some puckish parks department employee thought it would be amusing to build a fire so that the Texas could be puffing smoke as it was rolled into the Cyclorama building.

McQuigg said the steam engine was blasted with baking soda (instead of the more-abrasive sand), removing rust and old paint. Historians researched such details as the proper paint colors. They decided to stick with basic black — its appearance during the 1880s — instead of the locomotive’s gaudy red, yellow and gold Civil War-era color scheme.

The tender dates from the late 1800s, or the end of the era of wood-frame train cars. Replacing its wooden beams required finding a homeowner in Lexington, North Carolina, who had a 150-year-old oak come down in his front yard and fashioning 24-by-24 beams from the ancient trunk. During the Great Locomotive Chase, the Texas was commandeered by Confederate soldiers who raced it backward from Big Shanty (now Kennesaw, Georgia) toward Chattanooga, Tennessee, to try to catch Union spies who had stolen the General. Because of that fame, neither one of the two steam engines was turned into scrap metal — the fate of every other locomotive on the Western & Atlantic line.

The Texas was kept in use until 1907, and many of its parts had been replaced by then, making it difficult to describe the actual vintage of the train. “A locomotive is a collection of parts,” said McQuigg, adding that date stamps on the wheels include one from 1888 and one from 1903.

The General is on display at the Southern Museum of Civil War & Locomotive History in Kennesaw.