Prep Golf: South’s Chavis leads 3A Championships after first round 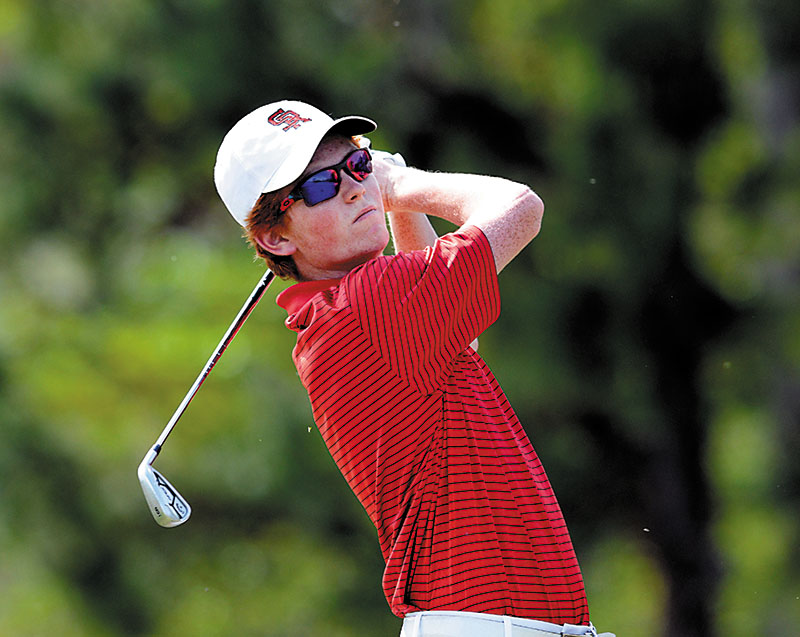 Wayne Hinshaw / for the Salisbury Post South Rowan’s Parker Chavis drives during an SPC golf match on April 12. Chavis leads the 3A Championships after the first round.

JACKSON SPRINGS, N.C. — South Rowan senior golfer Parker Chavis made five birdies for an even-par 72 and went to bed on Monday night as the surprise leader in the 3A State Championships.

“It was a really enjoyable day for me,” Chavis said. “There were some first-tee jitters, for sure, but when I started making pars, the nerves disappeared and I got down to business.”

Chavis topping the leaderboard at the midway point of the two-round event is a surprise, but not a shock. He’s an accomplished golfer, a Pfeiffer University signee and a frequent contender for Rowan County and South Piedmont Conference honors. He put together an eventful round as he toured the 6,651-yard Red Fox Course at Foxfire Resort. He was steady on the front and weathered a roller-coaster back nine to hang on to a precarious, one-shot lead over three golfers, including East Rowan junior Bryson Sprinkle.

There also were two 74s, two 75s and two 76s, so it’s still wide open. East senior Nick Lyerly, one of the pre-tournament favorites, posted one of those 76s, and is still in striking distance.

Chavis is playing in the event as an individual qualifier. He shot 75 in the 3A Midwest Regional at The Club at Irish Creek to earn a spot in the state field.

Bogeys on No. 10 and No. 12 brought Chavis back to even-par, and he was 2-over after he carded a potentially disastrous double-bogey 7 on the shortest of the course’s four par 5s, the 477-yard 14th.

“I hit over the green and into the woods on that hole,” Chavis said. “I was actually pretty terrible on the par-5s all day, and that’s where I usually have chances to make birdies.”

South coach Steve Beaver shared some words of wisdom after the 14th, and Chavis was determined to get those strokes back. He immediately got back on track. He birdied three straight holes — No. 15 and No. 16, a pair of par 4s, and then the 189-yard, par-3 17th.

“Nothing spectacular, I just executed the shots and made the putts,” Chavis said. “I was really happy with the way I bounced back from the double bogey.”

Chavis was 1-under going to No. 18, but he settled for a bogey on the tough finishing hole for an even-par round.

“I just misjudged the yardage a little bit on my second shot on 18,” Chavis said.

Chavis’ day included birdies on two difficult holes (8 and 17). Both holes yielded birdies to only four of the 84 golfers.

Chavis spent his off-the-course time on Monday hanging out with the East Rowan team. Today he’ll have support from South teammates, who will be making the trip to cheer him on as spectators.

Chavis will tee off today in one of the last groups — at 11:18 a.m. He’ll be playing with Wilson Fike’s Bryson Boyette and Lee County’s Dalton Mauldin, two of the players who are a stroke behind him.

East Rowan, runner-up the last two seasons, is very much in the team chase again, heading into today’s final 18 holes.

East’s top four combined for a 317 score (29-over). The Mustangs stand in third place, five shots behind Tuscola and three back of Marvin Ridge.

He was 4-over after three holes, starting bogey-double bogey-bogey, but holing the eagle from 160 yards out turned his day around. He birdied No. 9 to get back to 1-over and recorded nine straight pars on the back side.

William Garland’s outstanding day was critical as far as East staying in contention. He shot 5-over 77  and is tied for 11th place. He made two birdies and seven bogeys.

In the 2A State Championships at Beacon Ridge in West End, Salisbury junior Alex Antosek, an individual qualifier, shot 80 and is tied for 16th.

Antosek double-bogeyed No. 1 and No. 2 for a sluggish start, but he mounted a comeback. He shot 38 on the back nine.

In the 4A State Championships at Pinehurst No. 6, Davie County’s Wesley Sink shot a first-round 80 and is tied for 43rd.