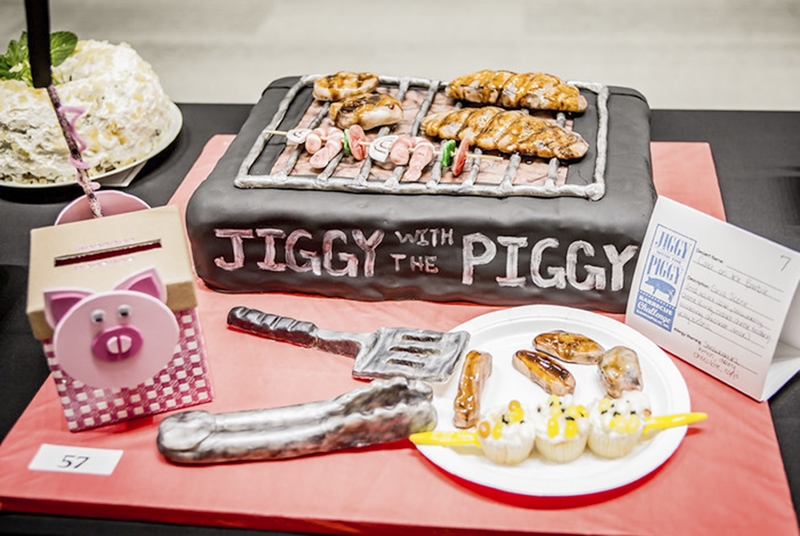 Phil Bumgardner/philtography.net The appearance winner in the dessert competition at Jiggy with the Piggy, Kickin Ash of Kannapolis.

KANNAPOLIS – Kansas City Barbecue judges spent Saturday afternoon very carefully judging 75 teams from five states who competed in the categories of chicken, ribs, pork and brisket at the Jiggy with the Piggy Festival.

One hundred judges from seven states chose the winners based on taste, appearance and tenderness.

Wolf’s Revenge was named the Grand Champion of the event and won $2,000. The Reserve Champion is Muttley Crew BBQ and they took home $1,500.  Highest Finish for a Cabarrus/Rowan County Team was Rockwell Smokehouse BBQ of Rockwell.

Fourth – Speaks for Itself of Kings Mountain. Phil Bumgardener/philtography.net The dessert taste winner at Jiggy with the Piggy, from Palmetto Pitmasters of Moore, SC.

The annual fundraiser for Bread Riot will be May 21, 3-7 p.m., at the Vista at Walnut Hill, located at 1090 Mountain Road, Cleveland.

Participants can visit two nearby farms on the way, Two Pigs Farm and Correll Farm, from 2-4 p.m.

The food will be catered by Divine Appetit. Local beer and wine will be available. This meal puts a spotlight on local farms. Meat, cheese, vegetables, beer and wine, even flour are sourced from local farmers and producers. Vegetarian options available.

Activities and music will also be available during the event.

Tickets are $35 for adults and $15 for children and will be available at the Salisbury-Rowan Farmer’s Market and through the Bread Riot website, www.breadriot.org. Only 300 tickets will be sold.

Sorting out what those food labels mean