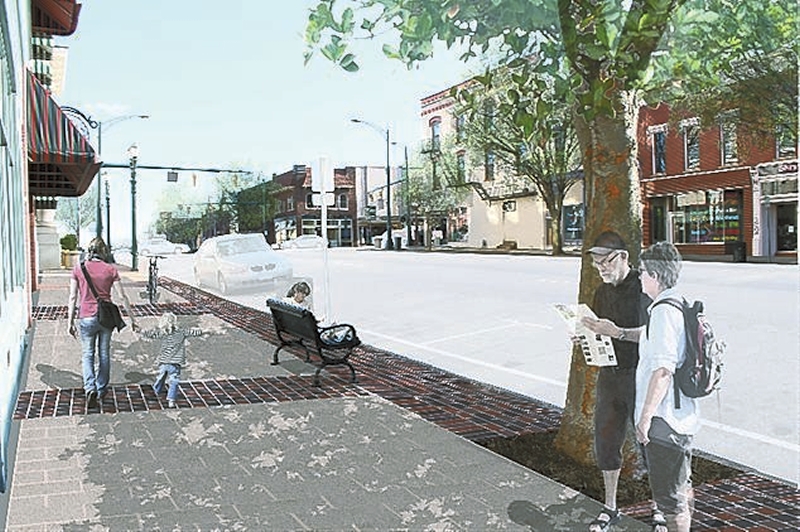 If you ever wondered what downtown sidewalks would look like without trees, take a look at the 100 block of West Innes Street.

Then think about what the rest of downtown Salisbury should look like.

Though City Council discussed the matter a couple of months ago, bystanders were taken aback to see city crews strip an entire block of sidewalk trees on Monday, first lopping off the leafy branches and then sawing through the trunks.

The city is preparing to put in new sidewalks made of brick pavers and larger, neutral-colored pavers. As that work was done, the trees’ roots would have sustained too much damage, according to Craig Powers, assistant public services director. The city arborist has said the two-story-tall trees were at the end of their life cycle.

Without the screen of graceful trees, the block now looks bare and harsh. This is not a permanent state. After the sidewalks are replaced and the fall planting season rolls around, crews will plant Bosque lacebark elms in their place, Powers says. The new trees will be “bigger than a little potting tree,” he says.

A couple of things are worthy of note here. When Chad Vriesema of Central Piedmont Builders was turning the Bernhardt Hardware Building on North Main Street into shops and apartments a few years ago, he wanted to remove the sidewalk trees to clear the way for construction, according to Rodney Queen, formerly of the city’s tree board. The board denied Vriesema’s request and he proceeded with the trees intact. “He did a great job working around them,” Queen says.

On another point, why can’t Salisbury have a canopy of decades-old trees shading the central business district, like downtown Greenville, S.C.? Powers says that may be something to consider in the right place at the right time, but the Innes Street sidewalks — and the high volume of traffic whizzing by — don’t allow space for the sidewalk construction required for large tree roots to grow.

A side note: Before the state resurfaced  Main Street in 2004, Downtown Salisbury Inc. proposed narrowing the street to three lanes. Some proponents suggested the city follow Greenville’s promenade-like example. They did not prevail.

For the record, maintaining Greenville’s canopy is a job, but one the people there consider worthwhile — part and parcel of a downtown renaissance that has won awards and boosted the economy. Greenville planted almost 200 trees downtown in the late 1970s, and the district blossomed. Several years ago, the city started thinning the trees, taking out four maples for every three elms planted under the direction of a nationally known landscape architect who specializes in urban environments. The project will extend the life of the downtown canopy.

Back to West Innes Street — which, by the way, needs new sidewalks. It’s too late to make a case for saving the trees that already fell; the Monday tree massacre is history. In the future, though, must downtown trees always be treated as temporary tenants? Or would it be possible to develop a plan with deeper roots?