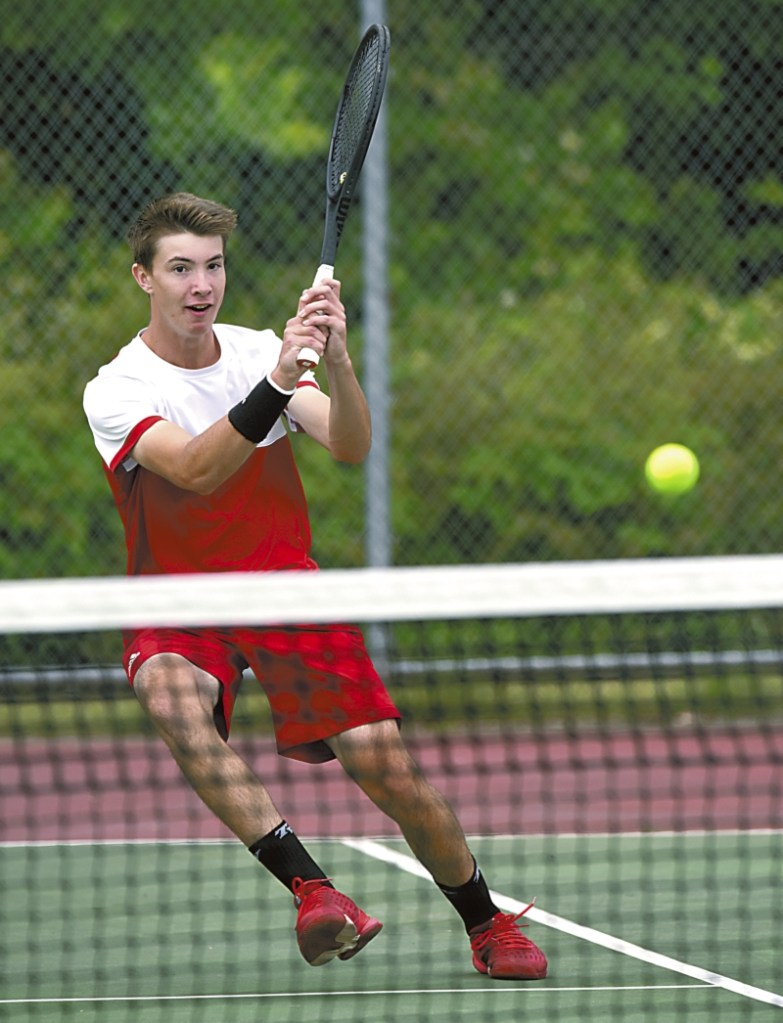 Wayne Hinshaw/for the Salisbury Post ... Salisbury’s Ethan McGee won 6-0, 6-0, in his No. 1 singles match Tuesday afternoon, in the second round of the 2A state playoffs against C.D. Owen High School. The Hornets won, 5-1, in singles and did not need to play doubles.

The Hornets labored their way into the third round of the 2A state playoffs Tuesday by muscling past visiting C.D. Owen, 5-1.

“We feel pretty good about this,” coach Milton Griffith said after third-seeded SHS (16-1) earned its 16th straight victory and third-round match at unbeaten Shelby (13-0) next Tuesday. “At the beginning of the year we weren’t predicted to be here. We were next year’s team. So every match we can win, I’m proud of.”

This one was tougher that it looked. Salisbury won five of the six singles matches and avoided having to play doubles — but nothing came easy.

“We knew this would be difficult,” losing coach Chuck Robinson said after No. 6 Owen, the Western Highlands Conference champion, finished 13-3. “Salisbury’s a tough team and I was really hoping we could get into doubles, but we fell short. When you come down the mountain its very tough down here.”

The most toilsome match came at second singles and was the last to finish. It pitted Salisbury sophomore Roarke Burton against Owen senior James Murray and lasted all of two hours. Burton prevailed, winning a 10-6 tiebreaker after splitting two sets.

“I’ve only been pushed that hard once all season,” Burton said after improving to 15-1. “I was completely exhausted, but because of all the conditioning we do, I was able to power through it.”

Burton dropped the first set 4-6 — only his second lost set all spring — and won the second 7-5. His win clinched the match and sent the Hornets into the third round.

“I was a little upset after the first set,” Burton said. “But (Griffith) talked to me and calmed me down. I came back out hitting the ball smoother, crisper and found a way to win. I would hit my shots a little deeper, forcing (Murray) back. Then when I had the chance, I’d find the strength to attack the ball.”

Salisbury’s Adam Drye reeled in the catch of the day at fifth singles, where the junior stopped previously unbeaten Michah Davis, 6-4, 6-1. Drye rallied from behind and built confidence in the first set, then exploited a Davis weakness in the second.

“I was confident and nervous at the start,” he said after boosting his record to 12-2. “I spent most of the first set letting him make mistakes and putting balls away. I targeted his backhand in the second set. It was a weakness that I discovered. He was a consistent player and we had a lot of long points. I just had to wait for him to make errors.”

Salisbury sophomore Jander Rodas had an easy time at third singles and remained unbeaten by dismissing Owen’s Joseph Frith, 6-1, 6-0. “I was in charge the entire match,” he said after winning for the 15th time. “I just had to keep hitting it cross-court. I had to out-rally him.”

“I was terrible,” said Weitz. “I played way better in the regional. He was lefty and I like to play down the line on the backhand side, but everything was reversed. I have to get better for next week.”

McGee, another 10th-grader, skated past Italian exchange student Gabe Talin, 6-0, 6-0. “He was actually a really good player, but I was a little better today,” McGee said. “He had a big serve. I had to be consistent on returns to keep the point going.”

Archer outsmarted Owen’s Gabe Lammens and recorded a swift and convincing 6-2, 6-1 victory. “I found out early — in games one and two — that he didn’t have a backhand. I just started moving him from side to side and controlled the match. That’s all it was.”

NOTES: Two Salisbury doubles teams had previously qualified for the 2A state individual tournament scheduled Friday and Saturday at Cary Tennis Park. Burton-and-Drye earned a spot by placing third in Midwest Regional while Archer-and-Rodas were fourth. … Owen’s Davis had won his first 10 matches. Lehman (5-0) was a replacement for teammate Elias Peters, who broke an index finger on April 30.