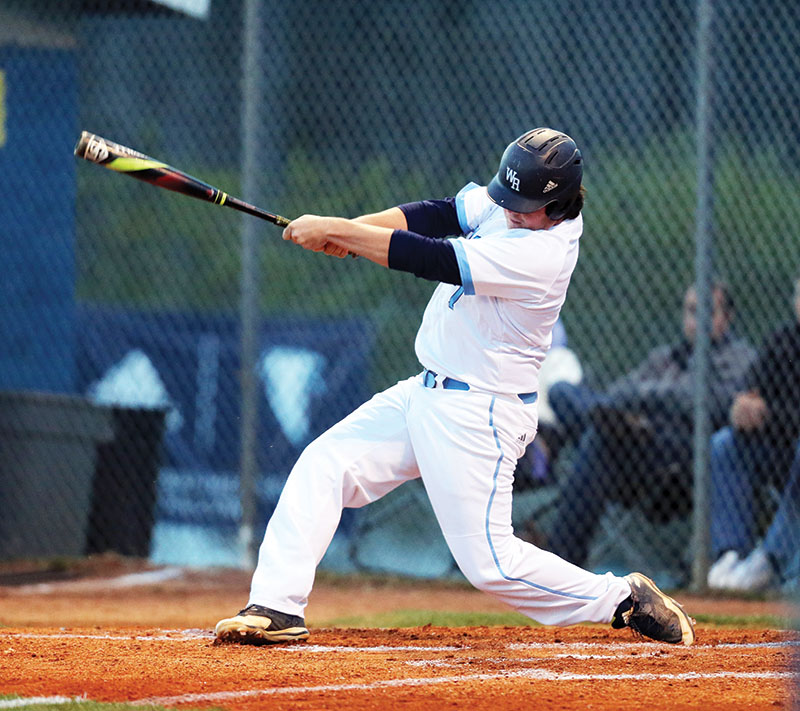 James Sipes/for the Salisbury Post West Rowan's Brandon Walton swings away during a game on March 24 against Cox Mill in Mount Ulla. Walton will continue his baseball career at Mars Hill.

MOUNT ULLA — Brandon Walton has hit .390 with 36 RBIs in two varsity seasons for West Rowan High, but his finest days in college may come on the mound.

Walton has pitched only nine innings for the Falcons (18-6) as a senior because a staff led by UNC signee Austin Love is deep and has a collective 1.61 ERA. But even a small sample size offers a glimpse into Walton’s future. He’s struck out 19 of the 34 batters he’s faced while allowing four hits, three walks and no earned runs. Those stats practically scream future closer.

“Brandon throws with really good velocity,” West coach Seth Graham said. “He hasn’t pitched that much for us because there aren’t enough innings to go around, but I think he’s going to be a 90 mph guy in college.”

College for Walton, who bats left-handed and throws right-handed, is going to be at Mars Hill University, a picturesque school in the mountains, about 18 miles from Asheville. Walton signed recently with the Division II Lions, one of Catawba’s rivals in the South Atlantic Conference. The Lions are a program on the rise in the SAC under coach Aaron Rembert. They won 30 games for only the second time in school history in 2016 and went 29-21 this season while finishing fourth in a very competitive league.

“Coach Rembert has turned the program around,” Walton said. “I liked everything about Mars Hill when I visited. It’s a nice campus and the people are friendly.”

Walton’s late grandfather, Buddy, was an umpire and scout, while his father, Alan, is a wrestling and baseball coach. He’s dreamed about being a college player since he started swinging a bat at age 3, and it’s been clear since the day he started his first game for the West varsity in 2016 and went 2-for-3 with two RBIs against Robinson that he would realize that goal.

That opening night success triggered a stellar junior season in which Walton batted .432 with four homers, seven doubles and 23 RBIs. He had 14 multi-hit games and he had a 7-for-9 tear in a three-game stretch of SPC games in early April. He accumulated 18 walks while striking out only six times. That great batting eye gave him an on-base percentage of .537, and he was arguably the county’s second-best offensive player behind East Rowan’s UNC-bound shortstop Ike Freeman.

During the summer between his junior and senior seasons, Walton was a standout for the Rowan County American Legion team that finished as national runner-up. Employed mostly as the DH, Walton batted .339 with two homers, 15 doubles and 49 RBIs. He also began blossoming as a relief pitcher, going 1-0 with four saves and a 1.04 ERA. One of those saves was a huge one — in the regional championship game in Asheboro against a powerful South Carolina squad.

There were crazy days for the Walton family last August when Brandon was playing in the Legion World Series in Shelby at the same time that his sister, Taylor, was pitching for Rowan County in the the Little League Softball World Series in Oregon. Last Aug. 16, both Walton youngsters were on national television simultaneously.

After that surreal experience, Brandon had to come back down to earth for his senior year. He hasn’t been as devastating at the plate this season, but he’s been very good — batting .346 with six doubles and 13 RBIs in a league that is ruled by pitchers. West’s team batting average is .252, which helps put Walton’s numbers in perspective. He’s been a big part of the Falcons’ third straight SPC title — the first time that feat has been accomplished at a school that started playing baseball in 1960.

“Winning the conference again this season is going to be the most memorable thing for me,” Walton said. “Winning the league meant more to me than anything I accomplished individually.”

Walton, 5-foot-11, 180 pounds, has made only three errors this season while rotating between three infield spots, depending on who’s pitching.

“One of the good things about Brandon is you can plug him a lot of places defensively,” Graham said. “He’s played first base, second base and third base for us. He’s good with the glove. He knows the game.”

As solid as he’s been as a hitter and defender, it’s still Walton’s right arm that may prove to be his biggest asset in the long run. It’s not hard to imagine Walton becoming a DH/closer for the Lions.

“Mars Hill is giving me the chance to be a two-way player,” Walton said. “I’ll just have to see how far I can go.”