Man in the hole: Sears has found what he was digging for — water 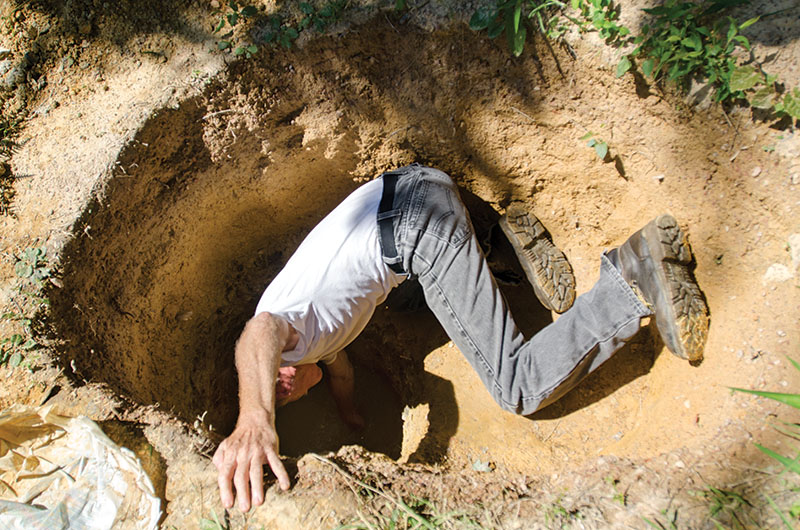 KRISTI CRAVEN/ SALISBURY POST Robin Sears climbs down into his hand-dug well in Salisbury on May 3, 2017.

How many times in recent weeks, you wonder, have the truck drivers gone by scratching their heads at the sight below them?

Down there where the land falls away from the asphalt, the wiry frame of Robin Sears partly sticks out from a hole — a hole that’s been getting deeper and wider as he keeps digging.

You might not believe it in this day and age, but the 57-year-old Sears has been digging in hopes of finding water and, well, he has found it only 6 1/2 feet down.

In fact, his hole keeps filling up with water, and Sears estimates he has scooped out 380 gallons in a plastic bucket over the past couple of weeks.

Sears says the 60-degree water is just the right temperature and passes his taste test.

Sears has plans to dig a little deeper, install a pipe, cap it off and have the water tested. If it’s all right, he will establish a pump and pipe the water about 220 feet to the quaint World War II-era cottage where he and his mother, Lillian, live off Bringle Ferry Road.

“He’s been digging constantly on that thing,” Lillian says, looking down on the hole from Black Road.

Robin Sears started his unusual search for water in late February, but it wasn’t as random as it might sound. A little country, but by no means random.

The Sears family bought their house in 1969, and one of the neighbors told Lillian then there was an underground spring near the then-unpaved Black Road, just down from her house. The head of the spring was marked by a maple tree, the neighbor said.

Robin recalls using a divining rod in that area in 1985, and how it indicated water was underground.

About 20 years ago, the Department of Transportation came in and widened and paved Black Road for all those big haulers.

In the process, the maple tree marking the spring was cut down. In addition, all kinds of gravel and other fill material were pushed down the side of the road, covering much of the same spot.

Now move to present day. For many years, Lillian has “carried in” water for cooking and drinking. “The water we have,” she says, “you can’t drink it.”

About once a week, Lillian or Robin travel over to Richfield Road, where locals know of free spring water that is good for drinking. They fill up numerous containers and take the water back home.

So in late February, remembering the story about the maple tree and the underground spring close to them, Robin told his mom he was going in search of water.

He used the forked branches from a peach tree as his divining rod, backed up by one fashioned from a metal coat hanger. Robin knew to look in that general area off Black Road, and his trusty devices pointed him to where the underground water was.

For many weeks, starting March 3, Robin Sears dug his hole using three different kinds of shovels — a regular spade, a narrower blade often used by landscapers and an old Army trenching tool that had belonged to his father.

You don’t know how hard it is to dig a wide, deep hole until you try it. Robin says look him over — he’s only 145 pounds.

“But I got body strength,” he says, “and I love working outside. I thank God for giving me the strength to do it.”

Since digging his hole, Robin has been taking pictures of it and using a long branch to help him measure the water as it seeps in. He had 4 feet of water in the hole two weeks ago that he scooped out with his 2.5-gallon bucket, sometimes lowered by baling twine tied to the handle.

Wednesday, Robin stood in his hole and placed his hand on a side wall about halfway up.

A Navy veteran and widower, Robin Sears is a longtime truck driver and volunteer with the Poole Town Fire Department. He has taken off much of this year to help in the recovery of his brother, who was injured in a mo-ped accident.

In her 80s, Lillian still does the cooking and buying of groceries. She likes to can fruits and vegetables. Walking along Black Road, she points out the calamus stalks, which she says have many health benefits.

Her whole yard is filled with wonderful trees, plants and flowers. She and Robin talk about their maypops, bachelor buttons, mulberry trees, plums, persimmons, sunflowers and swamp hibiscus.

The lightning rod on top of the house also doubles as a weather vane. Overall, it’s a charming, step-back-in-time place where you might expect to find a man hand-digging a well.

Sears calls what he is digging an artesian well. Whether it is technically an artesian well or not is open to debate, but Sears’ ultimate plan is to pump the water he has uncovered to the house and delight in its quality and abundance.

Meanwhile, the truck drivers going by will keep scratching their heads, wondering about that guy in a hole.