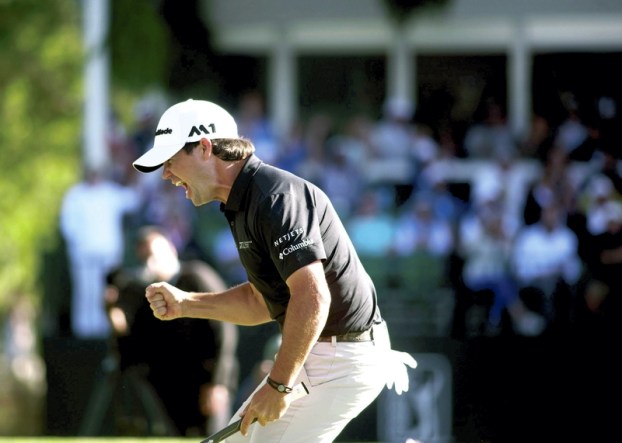 WILMINGTON (AP) — Dustin Johnson was in the clubhouse, tied for the lead and poised for a chance to join an elite class with a fourth straight PGA Tour victory. Brian Harman was on the last tee, knowing a birdie on the par-5 18th would be enough to win the Wells Fargo Championship.

Harman could have drawn it up differently, but not any better.

Switching from a 5-wood to a 3-wood for his 271-yard shot in the 18th, he went so long that he needed relief from a corporate chalet. His chip became harder because of tree limbs that made him go low, and his chip came out soft and barely got onto the green.

And then he rolled in a 30-foot birdie putt for a 4-under 68 and a one-shot victory Sunday over Johnson and Pat Perez.

“I didn’t hit a great chip. It didn’t turn out very good,” Harman said. “But I guess it went where it was supposed to.”

The greens at Eagle Point were so pure that Harman knew it was good when the ball was 5 feet from the cup. He turned and pumped his arms in a wild celebration that ended in a hug with his caddie, Scott Tway, for a victory that was a long time coming.

Harman won for the first time in nearly three years.

For Johnson, playing for the first time since a freak accident knocked him out of the Masters, it was the first time in nearly three months that he left a PGA Tour event without the trophy. It wasn’t from a lack of trying. Johnson made the cut on the number, and then went 67-67 on the weekend, including a 15-foot birdie putt on the final hole, to nearly pull out another victory.

“I didn’t have a lot of time off, so I didn’t really know what to expect this week because I didn’t really get to practice leading into this tournament, either,” Johnson said. “Not much has changed. The first couple days I didn’t play that great, but really played nicely on Saturday and Sunday and so I’m happy with where the game is going into next week.”

Perez did his part, bouncing back from a double bogey on the 14th hole that took him out of the lead by making birdies on the 16th and 18th holes for a 68 that he thought might be good enough for a playoff with Johnson, the world’s No. 1 player, and Harman.

“Hell of an up-and-down from back there,” Perez said. “He deserves it. He played great.”

Perez moves to No. 42 in the world ranking, which makes him a lock to be exempt from U.S. Open qualifying. Harman gets back to the Masters, and he doesn’t mind having to wait 11 months for a return to Augusta National.

Jon Rahm of Spain was in the mix, too. Rahm, one of five players who had at least a share of the lead on the back nine, watched from the 18th fairway as the crowd that surrounded the hole and filled all three levels of a hospitality chalet erupted in cheers. He knew he needed an eagle — just like the one he made at Torrey Pines for his first PGA Tour victory — to force a playoff. He was posing. And it sailed over the green, leading to par and a 71 to finish alone in fourth.

Lost in Harman’s long birdie putt for the victory were two shots that led to that moment — an 8-iron from 176 yards to 3 feet on the 14th for a tap-in birdie, and the pitching wedge from 137 yards on the 17th hole to 4 feet that put him in position for the victory.

In between was a three-putt from the par-3 15th that he thought would cost him.

“Knew it was going to be tough to birdie those last couple,” Harman said. “But I stuck to my game plan and just did it. Did the best I could.”

And it was just enough.

Johnson was playing for the first time in six weeks because of his slip down the stairs the day before the Masters that led to him pulling out. A quick start allowed him to lurk behind the leaders all day, and he holed a 15-foot birdie putt on the 18th that gave him a share of the lead.

Then, he was alone in the lead when others started to stumble — Perez with a double bogey on No. 14, Harman with the three-putt bogey on the 15th and Patrick Reed, the 54-hole leader who made four bogeys in a six-hole stretch on the back nine.

Reed shot 40 on the back nine for a 75 and fell out of the top 10. He played in the final group with Alex Noren of Sweden, who closed with a 77.

Johnson was trying to join Byron Nelson, Tiger Woods, Ben Hogan and Jack Burke Jr. as the only players with at least four straight PGA Tour victories. He was hurt slightly by his mishap at the Masters, when he suffered a deep bruise on his lower back from the tumble down the stairs while still wearing only socks. This was his first time playing in six weeks, and while there were signs of rust, he looked like the same old Johnson over the weekend as he tried to make up ground and almost did.

TALLADEGA, Ala. (AP) — It’s been a long journey for Ricky Stenhouse Jr. to make his way to victory lane.... read more