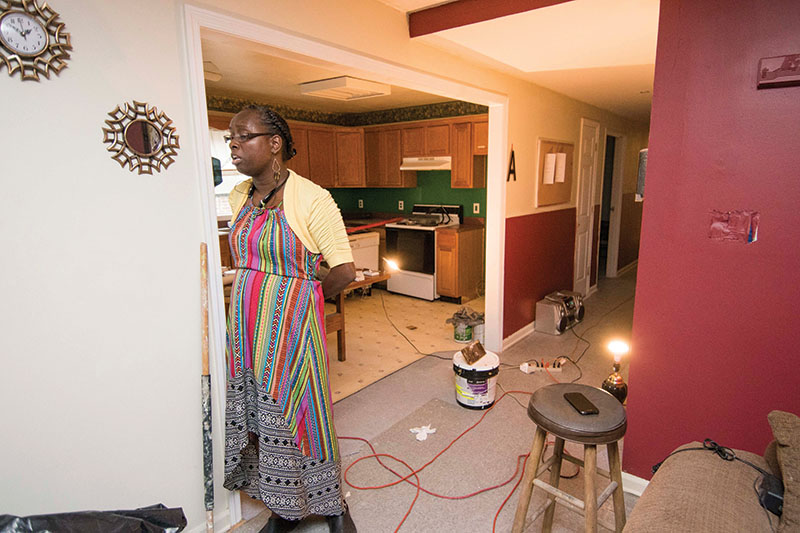 JON C. LAKEY / SALISBURY POST Jamilla Kennedy has received approval from the Town of East Spencer to proceed with steps to open a transitional housing facility and a community building in the center of town. LJ Independent Living will offer rooms for people that are looking to find permanent housing but need a place to stay as they look. Thursday, May 4, 2017, in East Spencer, N.C.

EAST SPENCER — Lillian Neal had always wanted to provide a transitional living space for adults but sadly died before that dream came to fruition.

Daughter Jamilla Kennedy this week was able fulfill her mother’s dream after getting approval to open a rooming house or transitional house in East Spencer.

About a week ago, the town board approved a conditional use permit, nearly two months after her initial request. Kennedy submitted her request citing her main purpose was to create a transitional living space for seniors 55 and older or young adults 18 to 20. Kennedy’s goal is to reach out to seniors, but she said she has more often been approached by homeless youth and at-risk teens who would be transitioning from foster care to independent living.

The property, 104 S. Long St., was owned by Love Christian Center Church until 2011 and had been a veterans housing facility.

The building was built about 2000 with the intent to accommodate multiple tenants as a shared-housing arrangement. The building has eight bedrooms, five bathrooms — including two that are handicapped-accessible — a kitchen and a living room area.

Kennedy has made some minor repairs to the building with the help of her family, but the major work was done by professionals. Much of the furniture inside the house was donated by family and some Kennedy purchased online or via yard sales.

This is her first undertaking of this kind and she’s grateful to family members who have helped make her mother’s dream come true. Her mother died 13 years ago at the age of 49 from a stroke.

“It’s something we always wanted to do together. I’m doing this in honor of her,” Kennedy said.

Kennedy said once the opportunity presented itself she had to take it. She said the holy spirit led her to the building and she claimed it before she was even approved for a loan.

She prayed about the property and kept her focus, Kennedy said as she recalled the months leading up to the loan approval. Kennedy knew she didn’t have any money, but believed if it was meant for her to have the building then God would provide a way.

Kennedy was approved for the loan and was able to not only obtain the housing space but the building next to it that she planned to turn into a youth community center called Save the Children Community Center. The carpet for the community center was donated and Kennedy was able to buy some games and furniture to outfit the building. Dwayne Holmes of Holmes Iron and Metal donated many items, she said. JON C. LAKEY / SALISBURY POST Jamilla Kennedy stands in front of the building on North Long Street in East Spencer that will be used as a community center. LJ Independant Living will offer rooms for people that are looking to find permanent housing but need a place to stay as they look. Thursday, May 4, 2017, in East Spencer, N.C.

She has a been in talks with the Rowan-Salisbury School System to get a summer feeding program at the community center. She’s tentatively looking to operate the meal site from June 15 to August 18.

“I’m actually excited to provide a place for kids,” she said.

She has plans for arts and crafts, movies and video games and tournaments, after school and child care out of the community center.

Kennedy is planning for a June 3 official opening from 12 p.m.-5 p.m. where she hopes people in the community would attend and sign their children up for after-school programs and activities. Representatives from area programs and departments also will attend to provide parents with information about what’s available.

For more information about the transitional housing or the community center contact Shontell Kennedy at 704-603-4590.