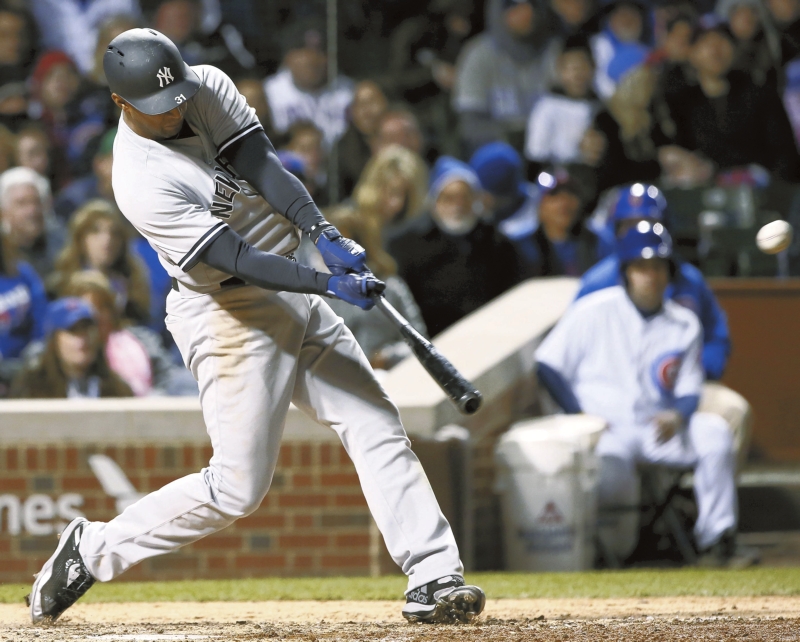 Hicks connected for a three-run homer in the eighth inning as the AL East leaders (19-9) earned their fourth straight win, extending their surprising start. Jordan Montgomery (2-1) pitched into the seventh for his first road win in his fifth major league start.

Castro, a three-time All-Star with the Cubs before he was traded to the Yankees in December 2015, hit an RBI double in New York’s five-run first. He drove a 3-1 pitch from reliever Felix Pena deep into the bleachers in left for a two-run shot in the fourth, giving the Yankees an 8-0 lead.

Castro finished with three hits in his fifth straight multihit game, running his AL-best batting average to .381. Hicks has 10 hits in his last 20 at-bats.

Anderson (2-2) allowed hits to six of his first seven batters before he was pulled with one out in the first with lower back tightness. He also committed a throwing error that brought in a run.

There were a few boos from the crowd of 40,735 as the left-hander walked off the mound with a trainer.

Anderson has recorded just five outs over his last two starts, allowing 12 runs and 13 hits. The inconsistent performance by Chicago’s rotation so far this season led to a costly move right before the game, with the World Series champions designating reserve outfielder Matt Szczur for assignment to make room for another reliever.

Rob Zastryzny, who was promoted from Triple-A Iowa, pitched four innings, but Szczur likely is headed for a new team. He was drafted by the Cubs in 2010 and made his major league debut in 2014.

The move underscored manager Joe Maddon’s concern about the stress on his bullpen. He also had backup catcher Miguel Montero work the ninth in his first pitching appearance since July 3 and the second of his career.

Montero threw one near the head of Chris Carter, patting his chest to acknowledge his mistake as he took a few steps toward the plate. Montero walked two and the Yankees had runners on second and third when Rob Refsnyder flied out to end the scoreless inning, drawing a big cheer from what was left of the crowd.

The 6-foot-6 Montgomery walked four for the second straight start, but allowed just three runs and three hits in a career-high 6 2/3 innings.

Yankees: OF Jacoby Ellsbury could return to the lineup for the series finale Sunday night. He bruised a nerve in his left elbow on Monday. “The plan is to shoot for tomorrow,” Ellsbury said. “It’s feeling a lot better, even from yesterday to today.” Ellsbury walked as a pinch hitter and scored in the ninth inning of Friday’s 3-2 win over the Cubs.

Cubs: OF Jason Heyward was out of the starting lineup with a sore knuckle on his right hand from a dive in the series opener.