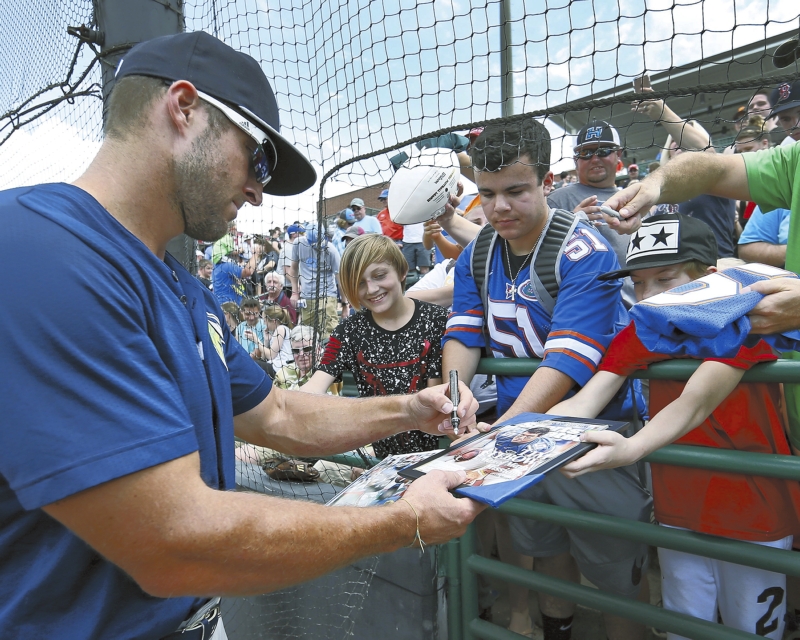 In this April 30, 2017 photo, Columbia Fireflies' Tim Tebow accommodates some lucky fans with an autograph before a minor league baseball game against the Hickory Crawdads at L.P. Frans Stadium in Hickory, N.C. The Single A teams of the South Atlantic League are seeing a burst in attendance whenever Tebow and the Columbia Fireflies go on the road. (Ernie Masche/Record/The Hickory Daily Record via AP)

COLUMBIA, S.C. (AP) — Tim Tebow is a big-league hit in the minor leagues.

The Heisman Trophy winner and former NFL quarterback has minor league fans around the Single A South Atlantic League flocking to stadiums and jamming ticket lines to see the Columbia Fireflies outfielder and designated-hitter.

The Hickory Crawdads sold out four games with the Fireflies, its total of 17,500 for the series surpassing the 15,900 they drew their first eight games.

“We had 4,500 people in the stands,” Crawdads season ticket holder Christopher Pack said, “and 4,300 were there to see Tim Tebow.”

People show up in Tebow’s NFL jerseys, and Florida Gator outfits, lining up around the rails in this intimate ballparks trying to get autograph or a selfie with Tebow.

It may be unclear if he will ever get to “The Show,” but one is clear: Tebow is the biggest show currently playing Class A ball.

That was apparent last Saturday in the eighth inning against Hickory when Tebow, on his off day with the New York Mets affiliate , heard the Crawdads crowd chant his name, hoping that Columbia manager Jose Leger would get him in the game.

“It’s not something you see all the time,” Hickory general manager Mark Seaman said.

The welcomed chaos has been evident during Tebow’s three road trips in April.

In Augusta, Georgia, the GreenJackets front-office staff had to scramble and find enough workers for concessions: 5,830 fans turned out, well above their season’s average of 3,190. A few days later in Rome, Georgia, — smack in the heart of Southeastern Conference football territory where the former Florida Gator was a polarizing figure — Tebow and the Fireflies drew 5,105 fans.

“That was two-and-half times what they might bring in for a game in mid-April,” said Lakewood (New Jersey) BlueClaws communications director Greg Giombarrese said. “That’s when I knew this was something different.”

The Fireflies will play at Lakewood in a four-game set starting May 13. They have sold out of their 6,588 reserve sets for two of the games with very limited seating available for the other two. Giombarrese said, after hearing about the other stops, the BlueClaws would have more than 200 employees at the park to handle the fans — about the amount necessary for its most anticipated games of the year like fireworks nights or other special promotions.

Giomborrese anticipates a big weekend because Lakewood, located near the Jersey Shore, is about 90 minutes away from the Mets home, Citi Field. It will be an opportunity for curious New York fans to get a glimpse of the high-profile prospect.

“There should be a lot of Mets caps in the stands,” Giomborrese said.

Teams on the small minor league circuit are looking to capitalize on Tebow’s presence while it lasts.

The Lexington Legends in Kentucky announced a “Ten Tebow” ticket package for the three series with the Fireflies, starting with a four-game set on Memorial Day weekend. The rival Greenville Drive in South Carolina made the Tebow the focus of a promotion where fans receive fast-food hamburgers should he strikeout three times.

Tebow takes it all in stride.

He’ll typically sign autographs before games, smile and wave to cheering fans, blending his popularity with the work necessary to make the major leagues.

“Any time you get support it feels good and people see you, watch you play or shake your hand,” Tebow said. “You can’t let it affect you, good or bad. You just have to stay locked in and stay focused on the task at hand.”

Tebow is steadily finding his swing . He homered twice in the season’s first weekend, but has not had another since. His average is under .250, yet he’s cut down on his strikeouts as he finds a comfortable zone at the plate.

The South Atlantic League dates its roots back to Ty Cobb, who played in the league’s inaugural game with Augusta in 1904. Stars like Cobb, Hank Aaron, Frank Robinson and Steve Carlton spent time in the “Sally” league on their way to the Baseball Hall of Fame.

The league is one where teenagers with potential develop and advance, said South Atlantic League President Eric Krupa, with fans who can say “remember when” once the young stars reach the bigs. Tebow is a dynamic the league does not often get, an established personality with a national fan base.

Columbia President John Katz was a budding baseball staffer with the then-Double A Carolina Mudcats when Michael Jordan came to his home state in 1994 with the Birmingham Barons. The frenzy seemed even bigger, Katz said, because Jordan was the NBA’s best player still in his prime.

“There are some similarities with how people turn out for Tim,” Katz said.

It’s only fitting the Fireflies are benefiting the most from the latest Tebow mania.

The Fireflies —  the longtime Savannah Sand Gnats before moving to South Carolina in 2016 — lead the league in attendance, averaging 5,027 fans per game. People show up in Tebow’s NFL jerseys, and Florida Gator outfits, lining up near the rail for an autograph or a selfie with Tebow.

“It’s been all positive,” Katz said.

Tebow, 29, signed with the Mets last summer. His baseball shelf life is shorter than his teammates, some more than a decade younger. Tebow and Katz both say there’s no timetable for him to leave the Fireflies — and put an end to the boom South Atlantic League teams are enjoying when he shows up.

“We don’t know how long this is going to last,” said Krupa, the league president. “But we’re going to enjoy it while it does.”